Reform of Hawaii’s legislative system is possible, if we work at it


“
[Former Japanese Prime Minister Kakuei] Tanaka's discerning eye saw through the fictions of democracy. He focused on the clear and simple fact that basic decisions involving the law are made outside the legislature—quoted in paper by Chalmers Johnson
”


Earlier articles in what is becoming a series:

How can I say we have a more advanced system of government and at the same time describe it as a feudal system? My thinking is this:

Two examples from this past week’s news illustrate the nature of our current system and can serve to illustrate a way out of it.

A bill seeking to ban foam containers was shelved this session, despite sizable public support.

Most of the 615 submitted testimonies supported Senate Bill 1109, which would have prohibited the use of polystyrene foam products by food vendors starting in January 2020. The material is commonly used for coffee cups and takeout containers.

Sen. Mike Gabbard, chairman of the Senate Committee on Agriculture and Environment, said the foam ban received the second highest number of public testimony submissions out of the 91 bills that came before his committee. The first was a pesticide buffer bill (SB 29) with roughly 700 testimonies.

Both failed to cross over to the House, despite their popularity with the public.

What happened to this bill?

It was up to Sen. Rosalyn Baker, chair of the Commerce and Consumer Protection Committee, to schedule a joint committee hearing for the bill, SB 1109, before Friday’s deadline.

Baker did not respond to requests for comments Thursday about why she failed to do so.

Further from the Civil Beat story:

“Bills are being decided behind closed doors without the opportunity for public discourse,” [Surfrider Foundation’s, Rafael] Bergstrom said.

This is nothing new. It is standard operating procedure for Hawaii’s state legislature to decide bills behind closed doors. I wrote in the first article linked above:

I attended a long hearing of the House Finance committee one day and wondered why it was being run by the co-chair instead of the chair. So I asked a representative during a break. He told me that the chair was in the back room working with then-speaker Calvin Say on decisionmaking.

In fact, they had already decided on many bills even before the bills came up on the agenda to be heard.

So much for that carefully written testimony that took you hours to write. So much for your waiting half a day to present it. So much for the expense of flying to Oahu from a Neighbor Island to give your testimony in person. You did what those classes on how bills become law say you must do. Then the system ignores you.

House Bill 790 would have required agricultural companies and others who spray large quantities of pesticides outdoors to provide extensive disclosure about usage and alert facilities that serve children and seniors before spraying chemicals in their vicinity, among other requirements, or face potential fines.

The bill had a Thursday deadline to cross over to the Senate and was one of three bills placed on the day’s agenda for a full House vote. But House members didn’t take a vote on the bill and instead quietly recommitted it to the House Consumer Protection and Commerce Committee, effectively killing the measure for the year.

The Hawaii House of Representatives on Thursday quashed a bill that would have required large-scale agricultural operations to publicly disclose when and where they spray pesticides and insecticides.

Even though House Bill 790 had passed three House committees — a high hurdle — Majority Leader Scott Saiki called for the bill to be recommitted to one of those committees during a Thursday floor session.

Another example, though there are potentially dozens or more each session, was the untimely death of a bill I personally hoped would pass, SB1137. We have a chronic shortage of physicians in Hawaii. That bill could have begun work to remedy the problem. It was killed by Sen. Baker without a committee vote (and three sponsors of the bill were on her committee).

A possible fix? One idea 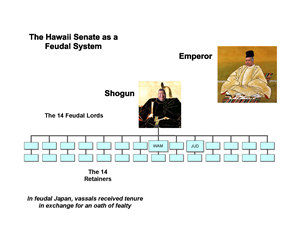 In Hawaii’s feudal system, the daimyos (feudal lords) are the powerful committee chairs. I would like to suggest that a fix to create a democratic system out of what we have could start with two changes to the rules:

The styrofoam bill, for example, had overwhelming public support. So it should have been voted on by each committee. Period. No “deferral” by committee chairs to kill the bill allowed.

As to the second part, another power that the daimyo committee chairs currently abuse is to recommend passage of a bill “with amendments.” But those amendments haven’t been written yet and could be anything. They could effectively neuter a bill or even replace its entire contents in a move called “gut and replace.” So the solution is to write the amendment, circulate it among all members of the committee in advance so that it can be read by each of them, and then come back for a vote another day.

There should be discussion on these and other measures to move our present system of state government on up to the next level, democracy.

As noted in my earlier article, bribery was a feature of Japan’s feudal system. Many TV period drama series featured bribes openly passed to officials in the feudal government.

At the time we lived in Japan, starting in 1972, bribery of public officials was still a feature of regular news coverage (see: Shameless shogun, The Economist, 6/9/2016). I recall that even after ex-prime minister Kakuei Tanaka, the subject of that article and called the “Shadow Shogun” in the Japanese media, was removed from office, news articles reported a steady parade of visitors bearing monetary gifts to his home.

Chalmers Johnson described “what the Japanese call kozo oshoku, or ‘structural corruption.’" in Japanese government which I think probably continues even today. This is hard to reform as it is tolerated by society in Japan. In Hawaii (as elsewhere in the US), this “structural corruption (構造 汚職)” is endemic in our system of political contributions and now exacerbated by permitting “superPACs”.

It appears that the influence of the ag-chemical industry played a role in Hawaii lawmakers’ decisions to kill that popular bill. This type of corruption may also yield to reform via legislative rules.

How to work on it:

We have a Political Science department in the University of Hawaii.