Neil Milner’s column on today’s Civil Beat website, Why The Trump Resistance Can’t Just Copy The Tea Party (Civil Beat, 3/9/2017) depends on the assumption that “copying” is what’s happening. I do see it differently.

I have thought that the marches and town hall meeting protests are not movements to bring about particular political or economic goals, which is what the Tea Party advocates are after. 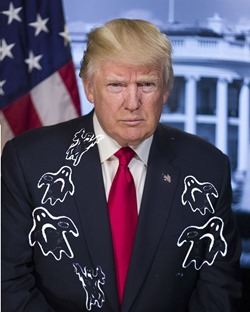 Instead, they are an immune reaction against specific pathogens—chief of which is the Pathogen in Chief, Donald Trump.

An immune response is how a body defends itself against organisms or substances that are foreign and harmful to the body.

Trump’s policies, no doubt formulated by the advisors to whom he has turned over our government, are toxic. There are plenty of examples, including the most virulent at the moment, Trump’s Muslim Ban. Besides that, could not the label “toxic” be applied directly to a person espousing racist, misogynist and intolerant views?

In the case if the Muslim Ban, white blood cells are being deployed—state lawsuits challenging the ban. The white blood cells multiply and gobble up executive orders to prevent them from causing damage. At this writing, three other states have joined Hawaii’s court challenge to the travel ban.

Town Hall protests are targeting toxic Republican policies such as their planned attacks on the ACA, Medicare and Medicaid. Without adequate defenses these plans and policies will cause real harm to people of all ages.

People would not die immediately when they lose their insurance policies, of course. Sure, it may be (say) a cancer that actually does someone in, but that death would be accurately described as “death due to complications of Obamacare insurance policy cancellation.”

Yes, the Tea Party was homogeneous and the Resistance movement is diverse. That can be looked upon as a strength—the potential participants are much larger and have each their own extensive constituents. We have to see how this plays out, but it sounds like a tactical advantage. Trump and the Republicans have alienated many sizeable subgroups of the population, and they are reacting. The process of collaboration has been effective so far.

As an example, large protests and legal assistance sprung up at airports immediately upon Trump’s issuance of his Muslim Ban order.

As to the Resistance folks having to show up regularly for sustained activity—hey, they have just begun to protest. Twitter and Facebook are alight with discussion and coordination of demonstrations. Social media is now how people meet and how they coordinate physical presence. So far it’s working well. It’s also how mostly younger people, as opposed to mostly older Tea Party folks, roll.

The multiple, large-scale demonstrations show that people are going out. They’re exercising their feet, their fists, and their lungs. Hey, exercise strengthens the immune system.

Neil, let’s give it a chance and see how it goes.