What kind of political system do we have if a committee chair, a single person, can kill a bill?

Last week I wrote in Hawaii has a different, more advanced system of government—let’s embrace it that Hawaii is unique in our country in having a state government not definable in Republican/Democrat terms. In fact, the Senate doesn’t have a single Republican at present.

That doesn’t mean that the rest of the bunch would be recognized as Democrats if one insisted on looking at them through conventional R/D, Red/Blue glasses.

That R/D mindset is tough to shed, but de facto, we have already largely escaped it. That doesn’t mean, however, that Hawaii is a perfect example of democratic governance. Far from it. All it means is that we’ve given up an outmoded ideology.

Getting rid of party divisions has exposed factionalism and blatant power politics as the drivers of policy and process in the state legislature.

Nevertheless I suggested at the end of that article that we keep what we have secret from the rest of the country lest they work to undermine it.

So what kind of a system do we have?

There’s good reason not to toot our horn quite yet—our political system is far from perfect. It still needs work before we can call it a democracy. If not quite a democracy, what is it?

I’ll throw in a bill I personally worked hard on, SB1137, which was killed last week when committee chair Sen. Roz Baker unilaterally deferred (killed) it. Darn, three sponsors of the bill were on her committee, you’d think if it came to a vote it might have passed. But she didn’t allow a vote.

In Hawaii’s legislature, and we are not unique in this, committee chairs are all-powerful. They not only choose to hear or not hear bills, but they routinely kill bills unilaterally and also direct their committee on how to vote for those that get that far.

The following analysis is not part of any class on legislative process that purports to describe how bills become law in Hawaii.

A rigid and persistent power structure

The basic structure is frozen from session to session and so defines our state’s system of government. So firmly based on power politics is it that it can best be compared to the Shogunate government of Japan in the Edo period (1603-1868).

Here’s an organizational chart I made some time ago for our feudal system of government. 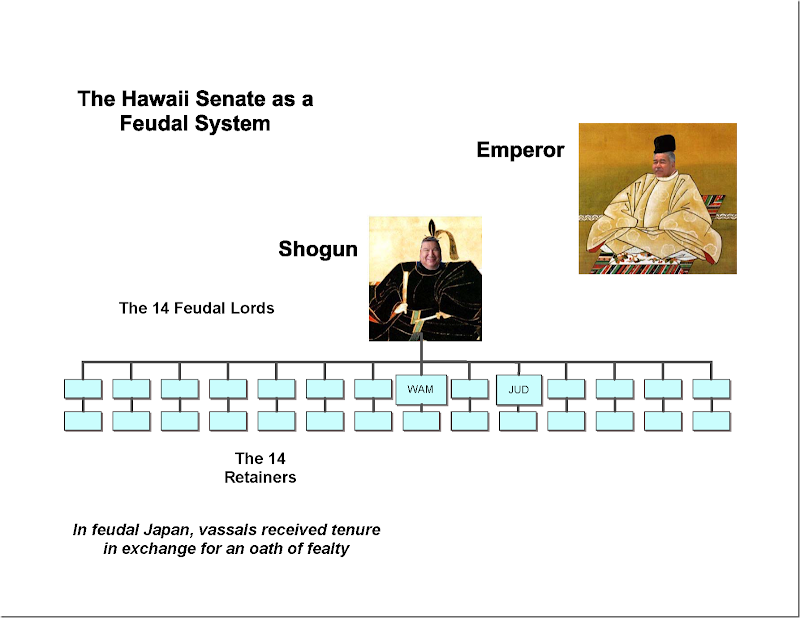 I have a similar chart for the House.

The chairs of Ways and Means and of the Judiciary committees are more powerful than the others, but each committee chair is a “daimyo” or feudal lord. Each has their own fief and reigns supreme within it. Each has absolute power and can prevent a bill from being heard or kill it despite testimony or public support, at whim.

Somewhere out in the firmament is the Emperor, here drawn as Governor Ige. As in the real Shogunate, the shogun and the emperor compete for power, and it is not a given that the emperor is always the most powerful. Usually, though, we can confine our analysis to the shogun and his vassals, the committee chairs, because they determine whether bills live or die in our legislature.

Forget democracy. Democracy cannot properly flourish in this system, though our process can still produce good law when pressed sufficiently.

To get a bill passed in Hawaii it helps to visit the daimyos to make personal appeals for your particular cause. Former Senator Hee confirmed this several times in public discussions—he advised, basically, don’t count on testimony alone, you need to go over there and speak with the lawmakers.

Now, for ordinary citizens, this may be an unwanted or uncomfortable chore. Can’t we just sit in front of our computer screens and write testimony? It’s chancy at best.

Of course, paid lobbyists do make regular visits. I’ve been chagrined more than once as a legislative staff member hemmed and hawed over when I might get an audience with the particular daimyo while one of the well-known lobbyists came in behind me and was granted instant access.

And they come armed with gifts and can bestow campaign contributions. The process is something like this: 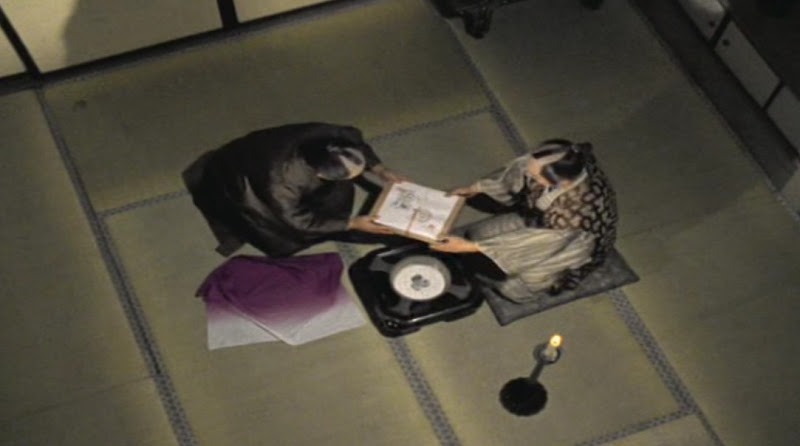 Public official accepting bribe in a snip from a Mito Komon program, a popular Japanese period drama that ran for many seasons. Bribery was a common theme—because there was also a culture of corruption in Japan (and still is!). In the next frame, the public official notes how satisfyingly heavy the box is. All this, observed by a ninja hiding above in the ceiling.

Democracy? Get over it.

This is how it works, how it really works. It’s probably no different in other states.

Are all legislators like this? No. There are many ethical, conscientious and caring lawmakers. Perhaps they are the ones who never get to be committee chairs.

It may come as a surprise to hear that testimony is routinely ignored. One former senator told me that he never reads testimony as he threw a bundle into a box on the floor near his desk.

If you do show up in person to testify, look around: most of the committee is often absent, arriving later only to vote on bills they were not even present to hear. But what the heck, the committee chair is going to instruct (“recommend”) how members should vote anyway.

More: I attended a long hearing of the House Finance committee one day and wondered why it was being run by the co-chair instead of the chair. So I asked a representative during a break. He told me that the chair was in the back room working with then-speaker Calvin Say on decisionmaking.

In fact, they had already decided on many bills even before the bills came up on the agenda to be heard.

So much for that carefully written testimony that took you hours to write. So much for your waiting half a day to present it. So much for the expense of flying to Oahu from a Neighbor Island to give your testimony in person. You did what those classes on how bills become law say you must do. Then the system ignores you.

The finance committees and judicial committees are “terminal” committees, last in the referral chain. It’s where bills most often go to die. That’s why those committee chairs are the most powerful daimyos. A bill may seem to have made easy progress though prior committees only to meet its death here. One whisper from the President of the Senate or the Speaker of the House and the will of the leadership will be carried out.

Democracy? Get over it.

Even should public testimony and pressure be so strong that a bill survives the entire process, it then goes into secret conference committees that are selected by the President of the Senate and Speaker of the House. It’s where their power is revealed in all its awesomeness. Appointing members who voted against a measure to a conference committee is a hint that the bill in question will never emerge to be signed by the Governor.

Any semblance of democracy dies as a conference committee convenes behind closed doors.

This parallels the tension in feudal Japan between the Shogun and the Emperor. In our legislature, it doesn’t matter if the bill was part of the Governor’s package, the shoguns reign supreme in the end.

So better that we keep our system of government secret a while longer. It still needs a lot of tweaking and adjustment.

Even so, getting rid of the R/D split sounds like a step in the right direction.

All we need to do is break this feudal system and maybe we’ll have something to boast about.

Breaking this system is necessary to move toward a democratic and inclusive system of self-governance. If we can do that, it’s predictable that citizen participation will increase because the people will be in charge rather than the elites.

The Shogunate fell in Japan and it must fall in Hawaii as well.

Hint to good government groups: this would be a great mission for you if you choose to accept it.

"lest they work to undermine it"

How could 'they' undermine Hawaii's system?


The easiest would be if Mainland organizations put big money behind Republican-identified candidates. The influence of PAC money cannot be underestimated. Electing a representative solely because of party affiliation could, I imagine, reinforce the R/D dichotomy.

Perhaps there are other ways I can't think of. The success of a basically non-partisan state government could even be seen as a challenge to both established parties. It might, in the future, open the doors to electing those who don't identify with either major party.

That's a stretch, I know.

Thank you for publishing this from years past. I was just told that this is exactly how it works by a staffer who didn't stop to consider how the process is so shoddy! It just slipped out of his mouth. Speaking of staffers, I've come to realize that their job is to be a barrier between the lawmaker and the public. Heaven forbid that concerns of the public would ever be conveyed to the politicians!