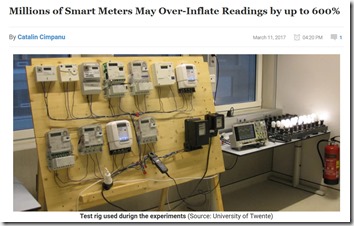 Before critics of smart meters in this country get overexcited, it must be noted that these tests were conducted in Europe. They should raise concerns, but tests would have to be done on this side of the pond to see if equipment used in the USA is subject to the same or similar errors.

Dutch scientists at the University of Twente conducted tests on nine different brands of  smart meters. They found variations of from -32% to +582% of actual power consumption.

Another concern that I would like to throw into this (not mentioned in the articles making their way around the Web) is the calibration (or lack thereof) of equipment used for submetering in condos and other settings (universities, etc.).

Submetering is a method of allocating costs—in a condo, measuring equipment is installed at each apartment and used to subdivide the building’s electric bill so as to allocate it to the individual apartment owners. Some states have laws specifying the calibration standards necessary for this equipment—Hawaii does not. Clearly, equipment that does not meet calibration standards could be under- or over-billing owners.