SB1137 would restore control of HMSA to its members

SB1137 is a deceptively simple yet powerful bill. It applies to any mutual benefit society in Hawaii. The kernel of it is this sentence:

notwithstanding anything in the constitution and bylaws to the contrary, the administrative board or body of the society shall permit a special meeting to be called upon the written request of not less than one thousand members of the society.

This bill would return control of HMSA to its members. Right now, it would take something over 17,000 members to call a special meeting, an impossibility.

The bill needs testimony. It will be heard on Monday, February 27, at 9:30 in room 229 before the Senate Committee on Commerce, Consumer Protection, and Health.

Please consider even the simplest testimony. Click here and then the blue “Submit Testimony” box.

Hawaii has lived with a chronic shortage of physicians for some time. It only gets worse, never better. While doing nothing has its consequences, it hasn’t been clear what the legislature could do that would reverse this deadly spiral.

Perhaps there is a way: SB1137 gives power to the people to take action—specifically, power to HMSA members themselves. The bill has one hearing in the Senate (and testimony is needed!) on Monday, February 27.

First, some context. If HMSA members were able to influence the operation of what is supposed to be a “mutual benefit society,” they could require that several important changes be made. In addition to revising reimbursement rates, other worthy areas of scrutiny would be denials or delays of imaging requests, and a restricted formulary that can actually endanger lives.

The continued attrition of doctors is a kind of "sword of Damocles," which, like climate change, brings with it a sense of impending doom. Nothing that the legislature, the medical school, or anyone else has done has reversed the downward trend that must lead one day to catastrophe.

The danger of a physician shortage surfaces periodically in the press. Here, as an example, are stories from 2005–a dozen years ago:

Every private practitioner is a small business. HMSA is the near-monopoly insurer that is so powerful that doctors either sign up or they can’t survive in the state. And HMSA sets the reimbursement rates for their services. Physicians cannot afford to practice in Hawaii largely due to low reimbursements that don’t compensate them for the high cost of doing business here. The only way out of this situation is an airplane ticket to another state.

Starting this year fundamental changes to reimbursement have been made along with an increased paperwork load that promises to accelerate the attrition.

If Hawaii’s physician shortage was a crisis in 2005, it remains a crisis today. I was recently told by my oncologist that four of his colleagues have just retired. When I visited a medical building in Wahiawa I found the number of empty office suites to be truly shocking. Physicians retired or shut down their practice and no one moved in to provide the community with care.

Restrictions on imaging can cost lives

Reimbursements are not the only issue that members can work on. Last year HMSA’s denials of doctor’s imaging requests broke into the news. 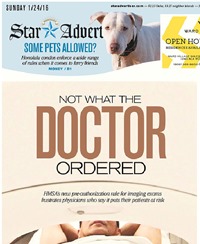 As a cost-cutting measure, HMSA began requiring doctors to get pre-authorization from a mainland company before it would approve imaging tests starting December 1, 2015. But this is not the first time HMSA has attempted to put the brakes on imaging.

HMSA claimed that the restrictions were necessary, according to the newspaper article, since its imaging utilization costs were about nine percent higher than the national average. Whether or not that is accurate, a Star-Advertiser story revealed that at least for Medicare patients, who typically have a higher usage rate than the general population, Hawaii’s imaging untilization rates are in fact lower than the national average. In 2014 the Medicare utilization rate was the lowest in the nation. 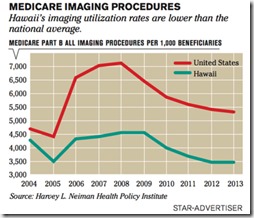 The effect of denying or delaying imaging would be a clear danger especially to patients wheeled into emergency rooms or for whom a delay could be life-threatening.

HMSA’s imaging restrictions are not new

Digging deep into the archives turns up this Star-Bulletin story of HMSA imaging denials that nearly cost a patient his life. Fortunately, he could afford to fly 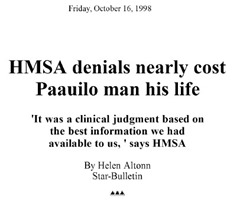 to Texas and pay for the test himself. Although privacy restrictions were not in force at the time, I’m redacting the names in this article since they are not important.

[Patient L], 49, had had surgery three times in his neck for what was believed to be
recurrent parathyroid cancer.

Despite doctors' requests, HMSA refused to cover an MRI because medical directors gave an opinion "that an MRI would not detect recurrence of metastatic parathyroid cancer . . ."

HMSA was very wrong. The article continues with Patient L in Texas:

An MRI was done on [L] immediately after they went there in May last year, [wife] said. Two days later, surgery was done to remove a cancerous parathyroid gland from her husband's throat and a cancerous tumor from his chest, she said.

"If they had done exploratory surgery in the neck (the only option without an MRI), they would never have found it in the chest."

Thanks to this next case, HMSA allows PET scans to detect colon cancer

In another denial that made the news, HMSA turned down a PET scan (Positron Emission Tomography) request that would have quickly, painlessly and in fact inexpensively ruled out colon cancer after a polyp was detected in [Patient E]. As the Star-Bulletin reported, the patient paid for the test himself (about $3,500) and learned that the polyp was definitively not cancerous. So he had it shaved off in a simple procedure.

The alternative was painful and far more risky abdominal surgery involving five or six days in the hospital with recovery of another five or six weeks, and, in fact, much higher expense.

Patient E brought his case as an appeal before the insurance commissioner and prevailed. As a result if the same thing happens to you or me, we can have our PET scan if we need it. That is if you or your attorney are able to cite this case if denied.

I need to carry an Epipen these days. If I should go into shock and don’t have it, I could die. The company that makes it was recently in the news for alleged price gouging, and as a result, a far cheaper competitive version came on the market. The cost to me was only $109.99 instead of over $600. I paid because HMSA refused to cover the pen.

Families across the country have to dig into their kids’ college funds or their retirement savings to provide allergic children (and adults) with their life-saving Epipens. That’s why the manufacturer’s price increases made the news.

Maybe I’m better off dead to them.

But I’m not dead, and will testify on Monday in favor of SB1137 so that HMSA members can change this and many other things we need to pay attention to.

This problem has eluded solution through legislation. But there is another approach that has promise–and it has to do with member control of HMSA, the near-monopoly insurer that effectively sets reimbursement rates for physicians in Hawaii.

HMSA is, at least in a technical sense, a mutual benefit society. But right now, according to HMSA bylaws, members cannot effectively call a special meeting to work on outstanding issues–and those issues are more than just reimbursements. The bylaws require something more than about 17,000 members to get together to request such a meeting. Here is the relevant paragraph:

Since the number of members needed to call a meeting is so high, it is in practice impossible for members to exercise any control whatsoever over the conduct of their own organization. Nor are there shareholders to whom management would be responsible since HMSA is not a for-profit company.

If members could dialogue with and control the conduct of their own mutual benefit society, issues such as inadequate reimbursements could be resolved.

Will you testify before Monday’s hearing? See the box above. It’s quick and easy. Tell your story if you have one.

I know of many physicians practicing in Hawaii, the common complaint between all of them is reimbursement and HMSA. The new reimbursement is an absolute joke and slap in the face, thankfully some of the doctors I've talked to will continue seeing patients out of a sense of duty. Nevertheless, I've heard of many doctors recently retiring and many more planning on it soon. I just don't understand the math behind HMSA, they charge just as high a premium as mainland companies, but reimburse at much lower rates, where does the money go? I know of young doctors, those who grew up in Hawaii, even doing med school at JABSOM, many are very hesitant to return home because of HMSA and physician pay overall.


Thanks for your comment. If you can, would you submit testimony on the bill? Thanks