Trial by fire or learn to plan? The traffic jam could spur the beginning of an important conversation


“
The traffic jam also underscored the consequences of Honolulu’s pattern of approving housing developments without ensuring there is adequate transportation infrastructure in place.—Civil Beat: Honolulu Traffic Jam ‘A Perfect Storm of Everything Falling Apart’
”

If housing developments continue to be approved, traffic is going to get worse, and the slightest incident (construction, a collision) will increasingly cause intolerable delays.

But you knew that. You knew it because you read widely, including Disappeared News. You know that if we don’t change course, we’re headed for the cliff for sure. 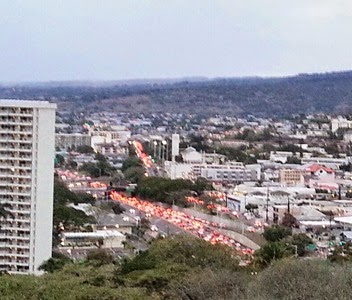 Neither our city nor our state believe in planning, whether its for development, traffic, affordable housing, the annually growing shortage of medical specialists, or whether it’s for mundane things like maintenance.

Just as nationally we are headed for the cliff of global warming because our leaders won’t take adequate measures to save us, here in Honolulu we are headed for our own cliff—in this case, as more and more homes are built, without restriction, and traffic just builds and builds.

As with global warming, there has been and will continue to be a steady increase in traffic, punctuated

“Human errors” can be simply a failure to plan adequately

The state Department of Transportation is spewing apologies for this week’s traffic gridlock, but no one so far has apologized for the lack of adequate planning that seems endemic in the DOT to begin with. Planning helps prevent human errors from causing trouble:

On most days, errors are caught in time, much as you remember to grab your house keys right before you lock yourself out. Those errors that evade the first layer of protection are caught by the second. Or the third. When a terrible “organizational accident” occurs — say, a space shuttle crash or a September 11–like intelligence breakdown — post hoc analysis virtually always reveals that the root cause was the failure of multiple layers, a grim yet perfect alignment of the holes in the metaphorical slices of Swiss cheese.

I’m suggesting explicitly that failure to plan causes trouble or even death—for example, when crosswalks are not protected by signage or blinking lights until after a sufficient number of people are killed.

This is no small thing.

by more and increasingly severe “storms.” This time it was piss poor planning for Zip machine contingencies. Excuses (which we’re getting plenty of now) don’t work, planning and checklists do.

The increase in traffic is inevitable, and we know this. It’s because the City Council approves housing developments and our roads just can’t absorb the growth in the number of cars.

Yes, we do know this and have known it for some time.

If we’re not careful, tourists will also figure this out and it could begin to hurt the industry on which the economy of this state depends.

What will the Japanese tourists tell their friends and perhaps the media back home about how they missed their return flights in Honolulu because of a traffic jam?

I don’t know if Honolulu uses traffic simulation software. If so, it would seem they could inform the public how bad traffic would get when cars are added at Hoopili, Koa Ridge, or other development they are inclined to approve.

What I would like to see are the numbers. We know that the planned developments will add cars and that Rail will not help residents shop at Costco, commute to jobs in Waikiki, or get to classes at UH Manoa. As long as there are parking places in town, there will be cars headed into the city each day to fill them, rail or no rail. This ought to be self-evident, and if not, someone needs to substantiate it.

The best way to convince the public (or City Councilmembers, if they were inclined to listen) would be to demonstrate that adequate planning is taking place.

If it is, if the city uses the software that could do it, then we, as taxpayers, voters and citizens, should be shown the numbers.

Yes, I’m a stickler for measurements. Without them, government does what it likes instead of what the people need. And developers get whatever they want, as they do now, at the public expense.

The Civil Beat article linked above is a must-read. In particular, don’t miss the last part, where a University of Hawaii professor lays it out in plain language. I can only snip a little, you need to click over and read the complete article.

On social media, pro-rail supporters leapt at the opportunity to point out that if highly controversial over-budget public transportation system is built, commuters won’t need to be stuck in traffic.

But Kem Lowry, a University of Hawaii professor of urban planning, said Wednesday that the city’s planned rail system is “at best, a partial solution” because it only ensures that traffic congestion will get worse at a slower rate.

He explained that Honolulu’s terrible traffic — among the worst in the nation — is the result of approving more houses than the city’s roads can accommodate.

“Transportation infrastructure has not kept pace with the growth of new developments,” Lowry said. “What we see is a consequence of that.”

We knew that, but perhaps the City Council and the Mayor need to be told over and over again until they get it.

But I suggest that it is not just zoning that needs to be reformed in this city. At the top of the article I listed up some other areas where we know what lies ahead but do nothing effective. If there were a culture of planning and adequate budgeting in this state (and city), then perhaps we could be assured that our quality of life and the health of our economy are being looked out for.

As it is, the only people who will be happy with the status quo are those related to development.  Oh, and the politicians they contribute to, I suppose.