“
“A typical traffic signal is not appropriate for the crosswalk because it is close to the heavily traveled Castle Junction intersection at Pali and Kamehameha highways, and because the area in front of HPU did not meet the minimum requirement of five pedestrian "incidents" in a 12-month period”—Department of Transportation spokesman Dan Meisenzahl  after the death of HPU student Mariah Danforth-Moore
”

I put my smartphone to work as a dashboard camera this weekend to survey crosswalks on one street in Honolulu. The results (below) document a failure of public policy that has resulted in avoidable deaths each year in the city.

While no one single measure is sufficient to assess the performance of individual public managers or departments, the unwavering position of Hawaii as worst in the nation for per capita senior citizen fatalities is an indication that city and state government, and transportation managers in particular, are failing to meet their responsibility to the people—and in this case, it is costing lives.

While fatalities are most often cited, there are of course serious and less serious injuries that result when a car or truck encounters a pedestrian on the street. People can be maimed for life. Promising careers are ended. Productive people become dependent. Allowing the conditions to exist without mitigation year after year is a failure of public policy of immense proportion.

What we want to see is a decline in the number of deaths each year over earlier years. We would like also to see the numbers for injuries and know that they are also decreasing.

The failure is not just of the management of Hawaii’s departments of transportation—it is a failure of government at every level in the state to embrace and remedy the unfortunate situation. Legislators read the newspaper and are fully aware of the annual death toll. Yet we still see unprotected intersections and missing signage on one of the most travelled streets in the city of Honolulu: South King Street, an accessible example. There would be plenty of other candidate streets crying for improvement.

Like the ever-rising poverty rate in the state, the lack of affordable rentals or the alarming increase in the number of homeless citizens, our leaders let these problems roll from year to year. That is irresponsible or inadequate leadership.

This needs to change.

Hawaii continues to lead the nation in per capita deaths for older pedestrians.

Year after year after year, the carnage is allowed to continue. Meanwhile, it appears that the state department of transportation requires “incidents” before making badly needed modifications. And those modifications are made piecemeal, rather than as part of a plan to reduce the collision rate. Year after year, no change, no improvements.

And no one is fired from the departments that allow these avoidable deaths to occur.

Those are strong words, but easy to substantiate. Yesterday I let the dashboard camera run while driving along S. King Street. Below you will see snapshots of each crosswalk that is not traffic-light controlled between town and University Avenue.

Note that only one of them has a blinking light setup and signage across the road, an arrangement very likely to be seen by motorists in each traffic lane. A problem with crossing on S. King St., that is, taking your chances on being killed in order to get across the street, is that a car might stop in a near lane, but drivers in the next lane from that cannot see you and may not stop. To cross cautiously means to poke your neck out at each lane, hoping cars will stop for you to go across. For an older and less attentive person, the maneuvering required might be difficult or impossible. So seniors, in particular, get killed.

The blinking overhead lights and signage would appear to provide a possible solution—so why is there only one crosswalk equipped like that?

It has been shown that putting signs or traffic lights over lanes increases their visibility to motorists.  With regard to traffic signals, the Manual on Uniform Traffic Control Devices requires that they be positioned over each lane, according to a Kokua Line article printed last year:

"While this may appear to be an excessive use of traffic signals, studies have found significant safety benefits in locating one signal head per through lane when there is more than one through lane," [DTS Director Michael] Formby said.

The sixth picture down shows a crosswalk with not only blinking lights but overhead signage visible across each lane. Why is that not the minimum standard for S. King St., Pali Highway, and other streets where crosswalks are currently death traps? 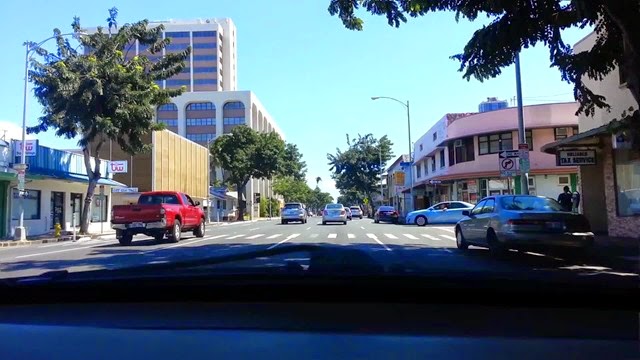 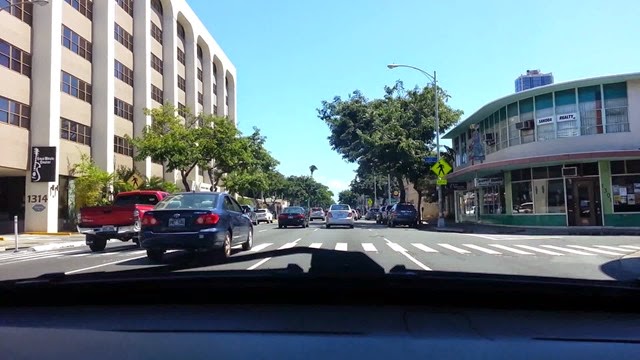 S. King St. / Sheridan St. sign on one side of the street only 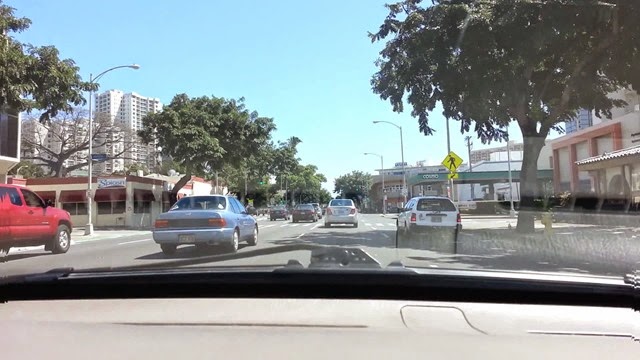 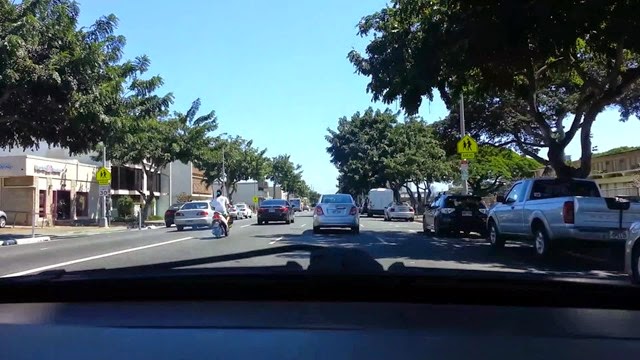 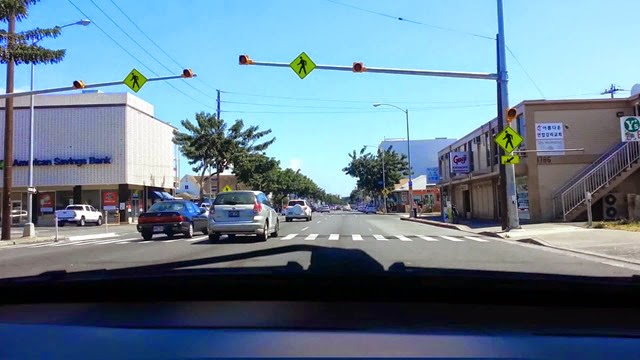 There seems to be a pedestrian push-button at this crosswalk. I didn’t try it, but it should flash the lights, right? 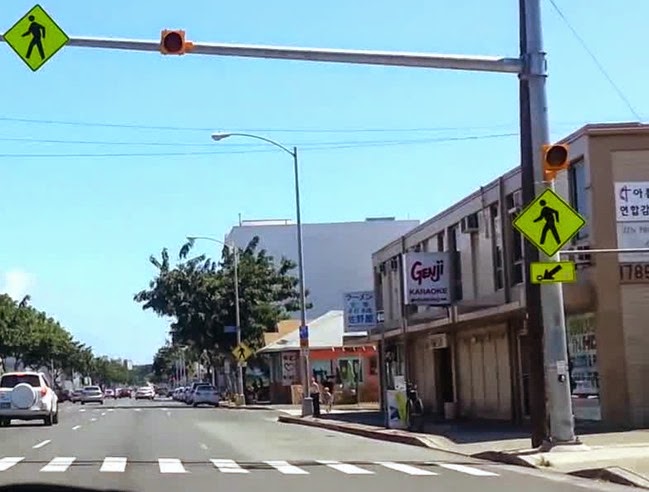 S. King St. / Hauoli St. signs on one side of the street (the sign on the left side appears to be installed at the wrong corner (?) ) 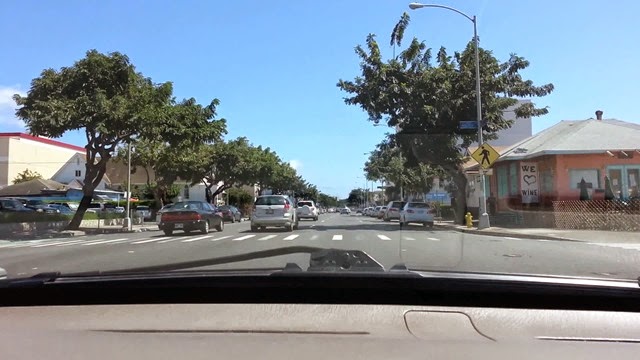 S. King St. / Pumehana St. signs on both sides of the street 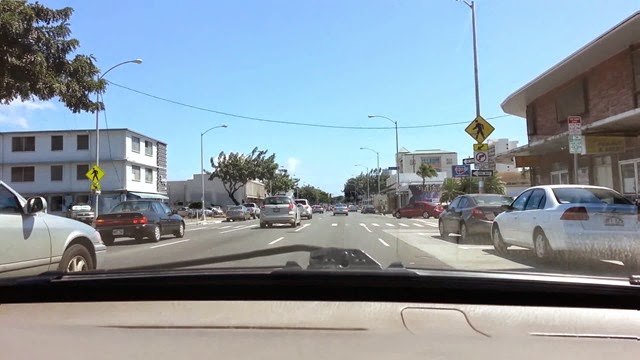 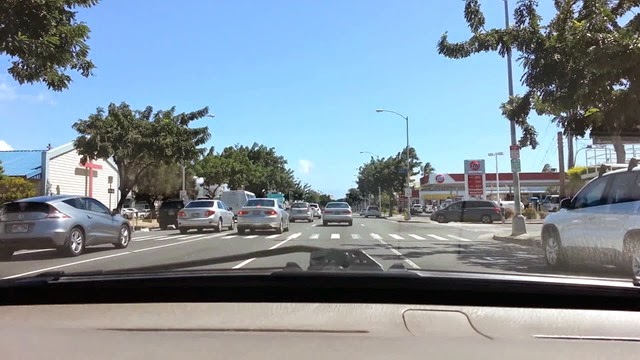 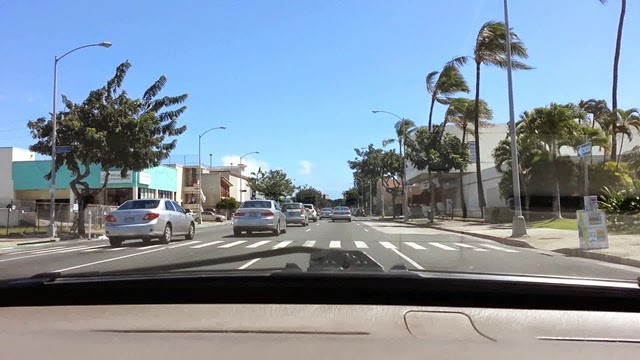 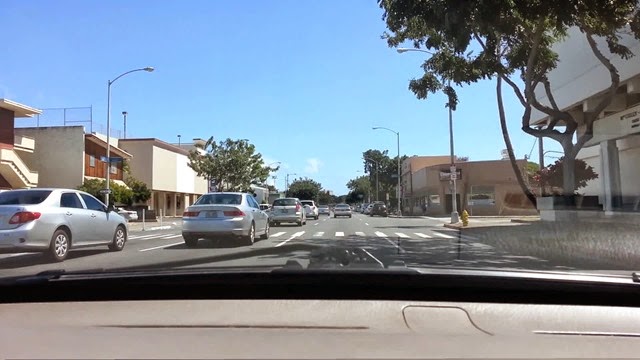 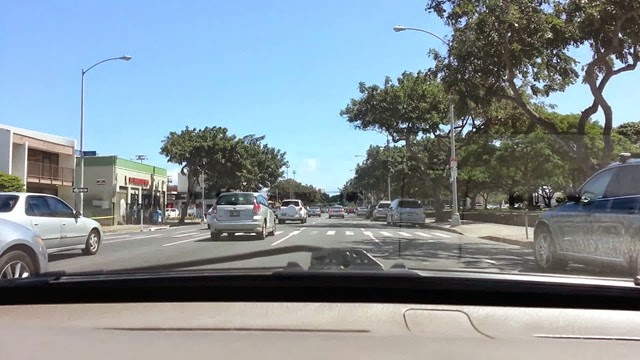 S. King St. just past Isenberg St., pedestrian crossing ahead signs on both sides of the street S. King / Coolidge St. signs on both sides of the street 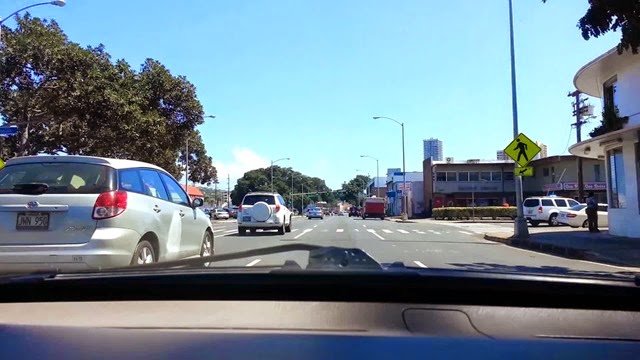 So let’s add this up.

Crosswalks with no signs: 6

The survey speaks for itself.

It also raises the question of consistency as a safety factor—do drivers get used to expecting signage before crosswalks, so that they become less attentive when those signs are missing?

More people will be killed at inadequately protected intersections.

That is, unless ordinary citizens begin to get together and demand action.

I have often remarked on the lack of visibility for these crosswalks to passengers in my car. I had no idea it was so pervasive! The crosswalks without proper signage or flashing lights makes So. King street a very dangerous place for walkers indeed!

I am no expert on this, but I'll bet that making a crosswalk very visible by means of bright signs and/or blinking lights conditions drivers to expect that subsequent crosswalks will be similarly marked. And then, when they're not, it makes it more likely that drivers will not be fully attentive.

If blinking lights are needed for one crosswalk, what does that say about neglecting the others?


Just witnessed a bad accident whereas a driver("blinded by the morning sun") hit an elderly man, in the first lane AFTER the 2 way bike lane, crossing S. King towards Washington Middle School. Hence, the problem has not been solved! I'm quite motivated, along w/ students, to make crossing the street, esp. in our school zone safer! Ideas? BTW, the accident was NOT in the news.


Thanks for your comment. No, nothing has been solved. The human sacrifice continues.

The accidents may not be in the news because they have been "normalized" and are not at all unusual.

I do think something can be done. It will take a movement--that is, not one demonstration, but continuous pressure until both the state and city departments of transportation put in effective safeguards.

To keep the pressure up will take leaders who can devote the time to organizing and motivating the demonstrations.

I write about these things, but it does no good. Transparency goes only so far when the issue is accepted by both government and citizens -- which is what I mean by "normalized".

I would welcome ideas from you and others on how to bring about positive change.