“
“If the mayor or the governor want something, it gets done," said Lynn Maunakea, executive director at the Institute for Human Services. "It is just not on their radar screen.”—from a 2003 Honolulu Advertiser story, referring of course to the Honolulu government’s lack of action on the growing problem of homelessness.
” 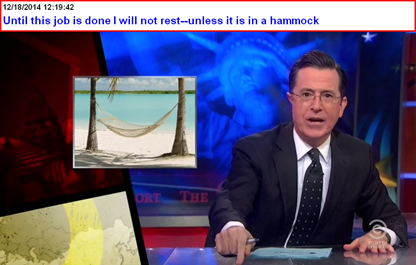 Hmmm... Looks like Hawaii, but it's really Cuba... Nevermind, I’m going to adopt this image.

Well, Colbert was giving the “Colbert bump” to Cuba, not to Hawaii. But this snapshot from his December 17, 2014 program stuck with me—I thought the hammock was already the official State Symbol of Hawaii. 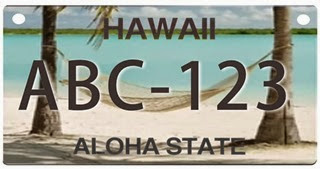 We already know that if you have a smartphone with you, no one back at the home office in Cincinnati need know that you’re not actually “working” hard at the office. Just resist the temptation to email the gang any selfies with Diamond Head in the background.

But seriously now, why should Hawaii be called “The Hammock State?” I can suggest plenty of reasons. One appeared on the front page of this morning’s newspaper. A snip: This is a great demonstration of Hawaii’s affinity for its hammocks.

Let’s examine this further, it’s such a great example. But there’s more. The consequences of relaxing in our hammocks is that events move on. The world continues to spin around. Stuff happening here at home continues to happen.

Yes, the sun continues to shine, tourists continue to arrive. All that is good. The profit motive ensures that those promoting tourism are not spending time in their hammocks. But where there is no profit—in particular, when our state or county governments are concerned—the only activity discernable is a race for the best spots to tie up the hammock ropes. On this issue as with many others, small advances are matched with inactivity or larger retreats.

Another way of looking at the consequence of neglect or inactivity in government is this:

Yes, the car with Hawaii license plates races onwards even as politicians snooze away. The outcome of each area of neglect is predictable, but the car continues anyway. It’s something like the climate crisis we face nationally—we know what’s ahead, but we continue to plummet forward without taking the steps that everyone knows we must in order to avoid certain disaster. Just that we have our own personal cliffs to go over here in Hawaii, and we’re apparently headed for the rocks just the same.

This needs to change, and the sooner the better.

Let’s mention some examples. You could undoubtedly think of your own, perhaps better than mine.

If the front-page picture in today’s paper had been smaller, there would have been more room for the discussion this crisis cries out for. Yes, it’s a crisis. How close to the end of the cliff are we? What needs to be done, how much will it cost, how can we afford it? Or do we just proceed over the edge and onto the rocks?

Ouch, that’s going to hurt. And if the rocks are on the Big Island, there may already be no orthopedic surgeon on duty to put the occupants back together again.

How long our government has been swaying in its hammocks can be illustrated by this sequence of news articles. As you see, the car simply proceeds down the road while we seemingly watch. 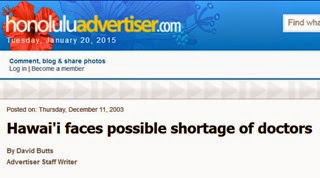 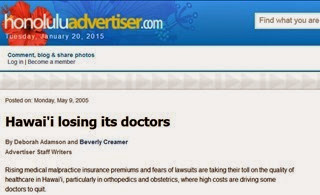 Jumping to May, 2005, the problem is reiterated in the newspaper. 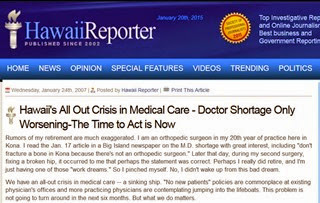 In January 2007, the Hawaii Reporter refers to “Hawaii’s All Out Crisis in Medical Care.” 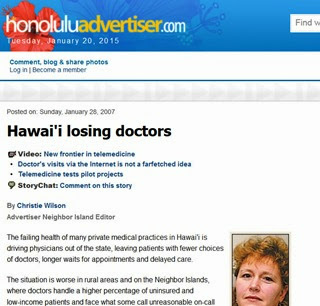 Later in January 2007, an article in the newspaper notes once again that “Hawaii [is] losing doctors.” 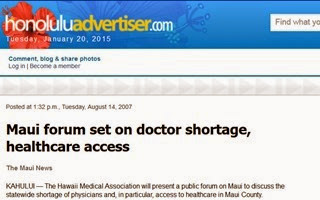 In August 2007, the paper reports that there will be a forum on Maui to discuss the doctor shortage. 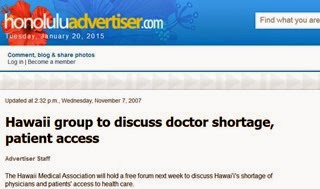 A small jump to November, 2007 and there is to be more talk… 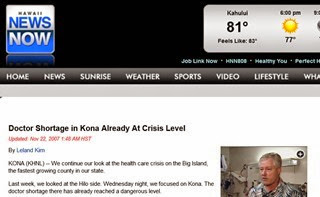 Later in November, 2007 it seems that Kona screams about the crisis (which was real then, and still is  today, that’s my point!). 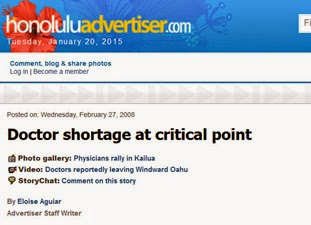 Moving to February, 2008, the crisis has not yet magically disappeared on its own. 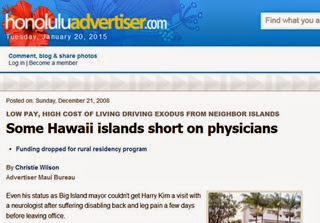 At the end of the year, December 2008, an understated headline notes that “Some Hawaii islands short on physicians.” Have they thrown out all the previous news? Sheesh. Are we over the cliff already, or not yet? Stay calm, editors. 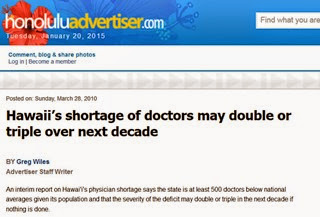 Moving a bit more rapidly now, it’s March,2010 and we are presented with a mathematical word puzzle: how a shortage can double or triple. Maybe they mean “shortfall.” Ok, that’s a quibble. But what’s happening? How close to the cliff are we in 2010? Do we go over if that shortage triples, or can it quadruple first? Someone please sound a bit concerned about this already… 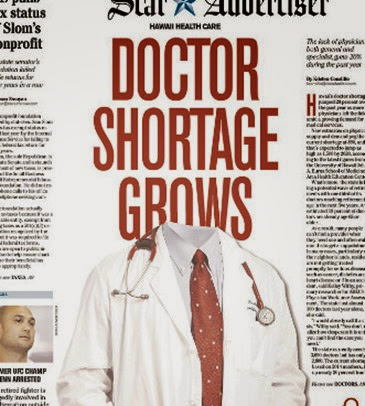 … and so we are back to today. I am not sure where “Doctor shortage grows” fits in with the doubling or tripling, though.

When exactly should we get upset?

Someone go check on the hammock situation, maybe we should withhold some beer or something. What will it take to fix this? Who is doing what, and is it enough? What are the consequences for inaction, and when do we feel them? How painful will it be? Who should we fire, or choose not to re-elect, actually?

Our homelessness crisis: we knew what to do in 2003 but didn’t do it

While lawmakers relaxed in their hammocks, the economy continued to worsen. Housing in Hawaii became increasingly expensive, especially affordable rentals. It wasn’t unusual to see people lining up with completed rental agreements for a landlord to review—often the first person to push to the front with a signed (but otherwise blank) agreement got the apartment or home.

I won’t step through the many articles, but I’d like you to see this, from 2003. 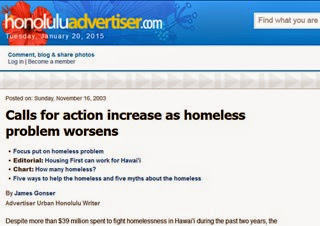 The November 16, 2003 edition of the Honolulu Advertiser focused on homelessness in Hawaii. Articles included:

This image suggests that even in 2003, people were looking for action. And there was some. The article mentions $39 million spent. In those days, that was a lot of money, and we cannot say it had no effect. But we do know that the numbers of homeless increased.  What’s discouraging is that the evidence-based Housing First program was known to us then. The same day’s editorial explains it nicely: 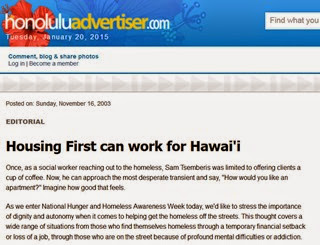 Read it. The editorial could have been written today. And it shows compassion, something amazingly lacking in much of today’s press coverage of what it means to be homeless in “Paradise.”
The editorial concludes:

To make "housing first" work in Hawai'i, we are all going to have to let go of our fears and prejudices and not expect people with mental health problems and addictions to pull themselves up by their bootstraps before we give them a break. They have to feel safe before they can change the behaviors they developed to survive.

Which brings us to the present.

This snip from the January 14, 2015 front page of the Star-Advertiser suggests something is happening. Yet we should not be complacent—people were placed in housing before, but without supports, and the project fell through.

Also, 63 people is a start, but the number is insignificant when compared with the need. Underlying this effort is a projected shortage of (depending on whom you ask) 20,000 to 50,000 affordable rental units. Even if that unimaginable number of units can be found, it will take years.

So while celebrating the belated response of the city to a crisis that has been building for more than a decade, I’m not holding my breath. The Mayor and City Council will have to demonstrate more actual effort toward a solution than we have seen.

In particular, the City Council has shaved the Mayor’s budget during 2014 while failing to understand how Housing First works. They are intent on clearing the streets of Waikiki, succumbing to claims that homeless people endanger tourism (tourism, in contradiction to those claims, is booming, setting regular records for hotel occupancy). To accomplish this, the Council enacted ordinances to criminalize homelessness.

A plan to create a homeless encampment on Sand Island has not yet been abandoned, and if it moves forward, would drain money from an attempt at Housing First. Nor has the city contracted for the intensive support services necessary to keep some chronically homeless in their apartments.

Those rats in Chinatown…

Well, with a totally insufficient number of inspectors, it was no surprise that rats could take advantage and move in where inspectors neglected to go. What’s more, with overtime prohibited to the inspectors, the rats could be assured that their feasting on our food over at Chinatown markets would not be interrupted.

If you haven’t seen my rat video, here’s your chance. It went viral for the time, and it was said that business in Chinatown decreased to 50 or 60 percent after the commercial TV stations picked up on it. Now that will get government out of its hammocks. The video is from November 23, 2009, just before Thanksgiving.

Click on the thingy at the lower right for full screen, and enjoy.