Honolulu city government: near zero bang for the buck

A couple of things came together in some conversations this evening. We are getting very little for our considerable tax investment from our city government in Honolulu. Beyond the lack of sewer system maintenance or the potholed roads, our government has not made Honolulu as nice a place to live as we have a right to expect.

While getting my haircut, the conversation ranged from how beautiful many California towns are—clean streets, outdoor eating, well-cared for homes, wide and safe bicycle paths. Good transportation, often free. And so forth. But not in Honolulu.

Then, over dinner at Pig and the Lady sitting under the tent at the Blaisdell Farmers Market, speaking to two other diners, one asked how come we don’t have more opportunity to eat outdoors. Again, mention of places elsewhere, both in Europe and America, where people often eat outdoors. We would love to have that here. When the food trucks staged an Eat the Streets event in Mililani, it seemed that half the town turned out, and they sold out very early, the guys said. We would go for it if we had the chance.

I can identify. I used to visit Singapore quite often and almost always ate outdoors at a hawker center. Their climate, like ours, is made for it. The mellow, clean air invites al fresco dining. Even in New York City, people crowd sidewalk restaurants and bistros. In Paris, Marseille, Nice, one can spend time eating or drinking and take in the scene, outdoors. Venice has San Marco and more.

But not in Honolulu.

Here’s an Italian-style piazza near Sydney, Australia (click for larger). It does mimic Italy. All around the Piazza San Marco in Venice are places to sit, eat or drink, take in the scene, and wait to meet someone you know, which is what is supposed to happen if you visit there [aside: it happened to us—Nanette met a cousin when we visited there]. 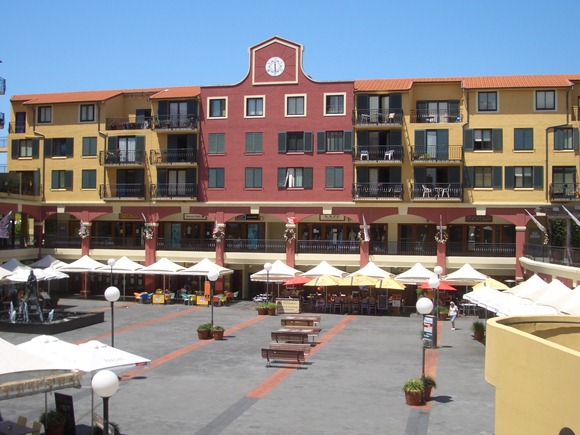 We have perfect weather for bicycling and high gasoline costs, so you’d think the Honolulu City Council would give us nice, wide bike paths. Think again. They don’t think that way. Aside from the health benefits, we could realize millions of miles of avoided automobile use and expense. 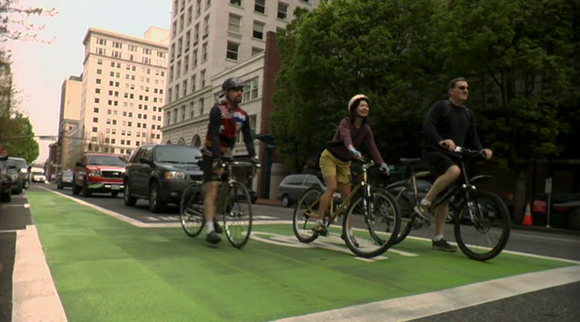 Take a trip with me to Bethesda, Md. (an easy ride from the airport by train).

It’s too hot for me in the summer and too cold in the winter, but look, when they can, they still eat outdoors. 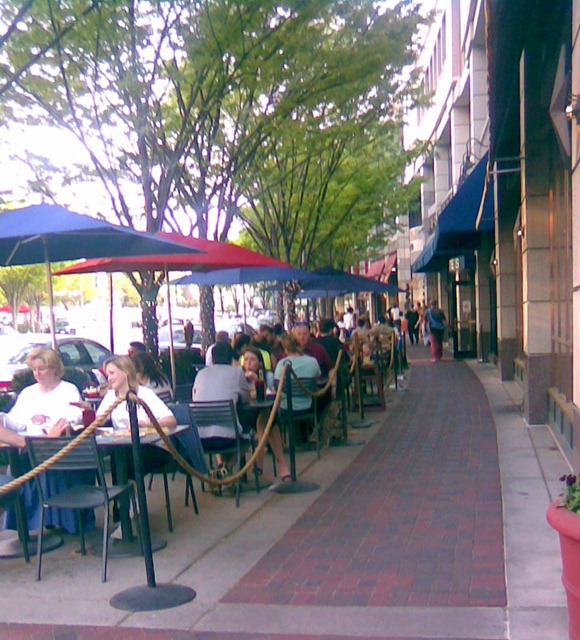 Nearby there are benches to just sit, eat, talk, sip that espresso… 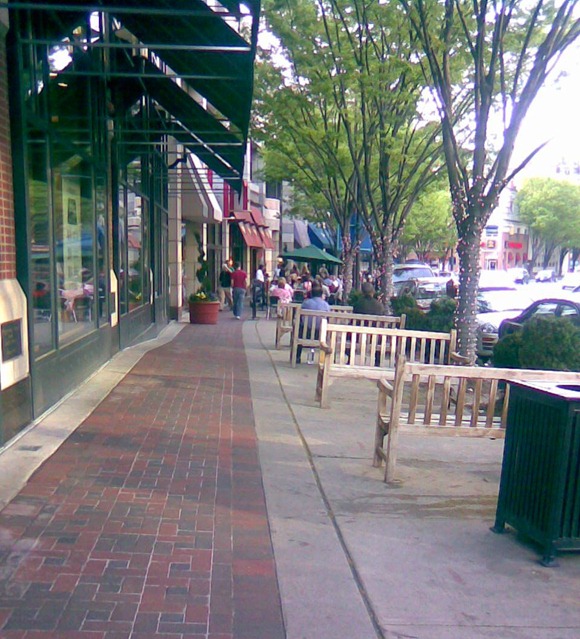 Sorry for the color on this next pic, but look: places to sit at this wide intersection, provided by the city, or at least allowed by them (I couldn’t determine authoritatively during my visit who paid for them although the consensus was “we did”/ “our taxes!”). 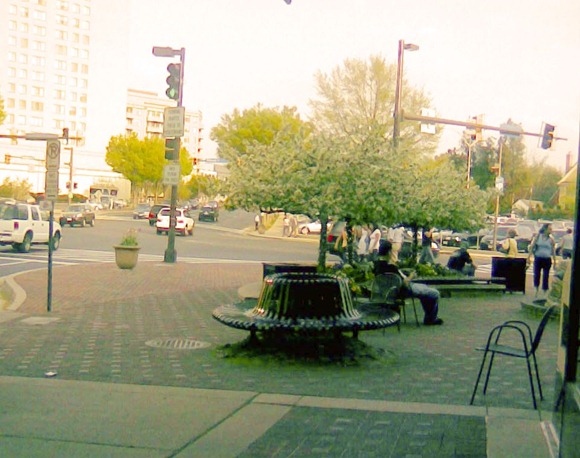 Now we’re in New York, after a pleasant Amtrac ride from Bethesda to Penn Station. 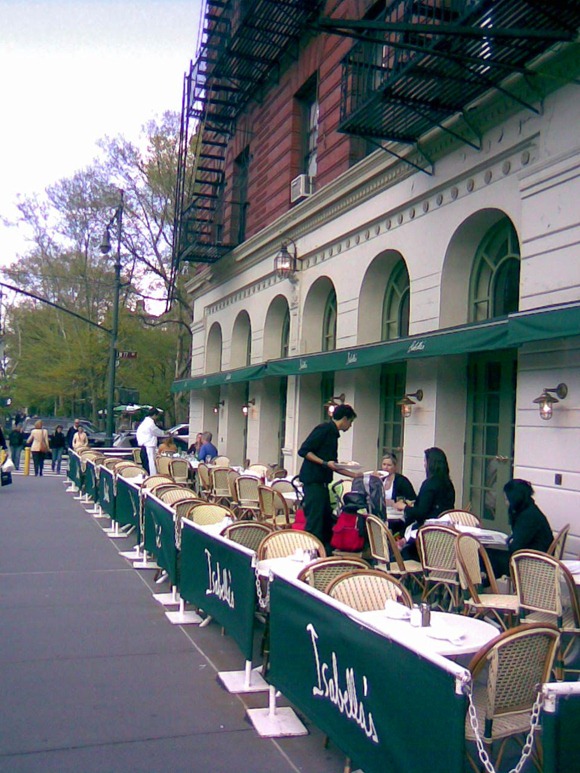 Note the fancy (expensive) restaurant right out there on the street. No HPD cops to confiscate their property as Honolulu law would require. The tables seem to be out there all day at least.

I’m sure senior citizens in particular love having benches on this median just to sit down for a moment. It’s landscaped, too. Honolulu would never think of this and besides, without maintenance, the plants would be dead within a month.

Here’s a wider median in midtown. It’s landscaped, and there are tables with umbrellas to shelter from the sun while enjoying a sandwich or that espresso. There’s a statue also. Ha! Try that in Honolulu. Here, statues are only for tourist areas. 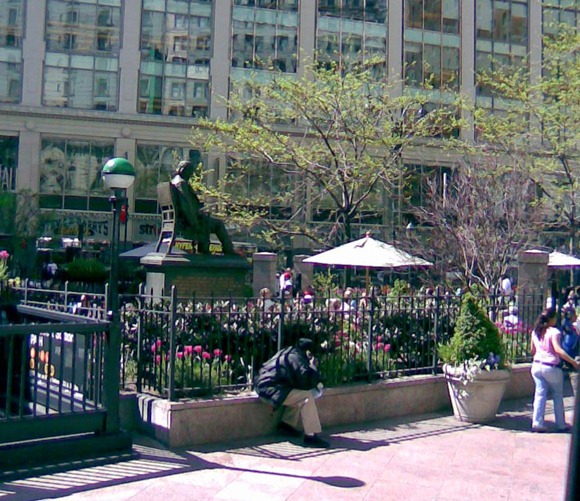 As long as we're in New York, check this out. Yes, a bus timetable and route map. Why don’t we have those in Honolulu (stop laughing!). It’s true, most of our bus stops don’t even say what buses stop there, much less when or where the buses go. The Honolulu on-line bus maps don’t even show or list the stops! 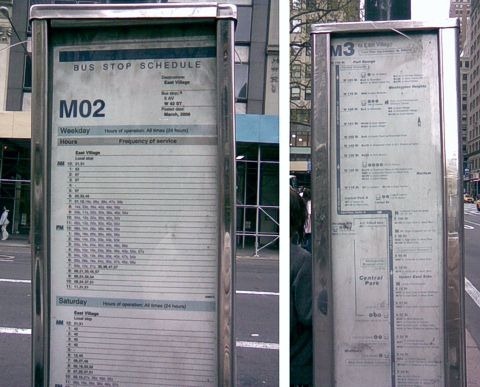 Enough for one rant. Today I had a chance to speak with others who noted how great it is to travel. I thought of the economic difficulty that both California and New York experience these days (not sure about Maryland), and yet, they provide their citizens with some basic comforts that we don’t have in Honolulu. Yet we pay our taxes just like they do.

But what do we get for it?

You forgot Portland. Plenty outdoor eating there. Good article. I hadn't thought of that.


Yes, outdoor eating in rainy Portland. I didn't take photos when I was there, so couldn't include Portland.

If readers happen to have photos of outdoor dining, taken from the public sidewalk, please send them. It would be good testimony for our City Council to receive.


We have been removing benches as the city feels it only gives the homeless more places to sit. Look at Fort St Mall or River St as examples. Even bus stops have replaced benches in favor of little round seats so that no one can lay down.

As for outdoor eating that has been my biggest about this city. Have restaurants even tried? are they city rules preventing it?
Would love to find out.