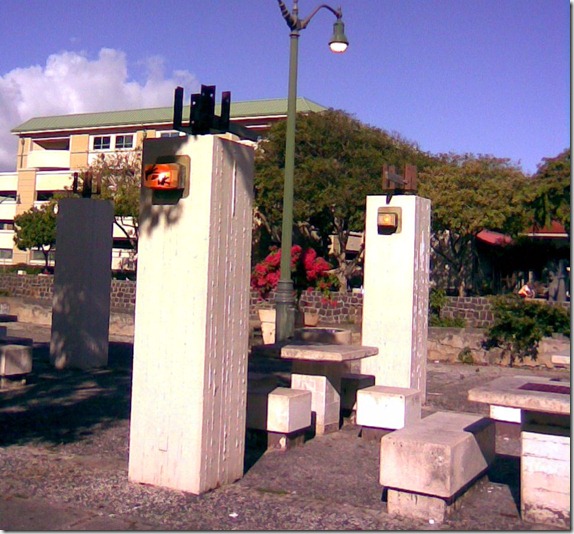 We walked to our favorite dim sum restaurant, Tai Pan, in the Chinese Cultural Plaza for a late breakfast this morning.  Yum! It was crowded, indicating a possible cultural divide. Isn’t everyone supposed to be glued to their TV sets right now watching football? Apparently, not everyone.

On the way out we walked along the river. What a nice spot that could be, if the city would do its job and maintain the place. The “disintegrating bridge” is still unpainted and crumbling. If APEC couldn’t get repairs done, I guess nothing will. Chinatown “Stonehenge” is just as ugly as ever. A couple of the light fixtures on the posts are broken and filled with litter. But the lights are on, as you can almost see in the above pic. Also, the streetlights along the river were still on, in broad daylight—except for the ones that have burned out.

Hawaii has the highest electricity rates in the nation. But the city just dips into our wallets to pay its bills. So we pay to keep Chinatown lit up during the daytime.

The space occupied by the ugly posts could be filled with tables and umbrellas and help generate badly needed income (and create jobs!) in these hard economic times. It could be a family-friendly place to gather at all hours of the day instead of an ugly wasteland.

That is, if anyone in City Hall cared.

Thanks for caring, Larry, and keeping the public attuned to the cities failures....Wasn't it Mufi who ordered the destruction of coverings?That type of leadership I do not want in Congress...