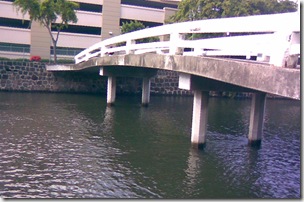 The pedestrian bridge crossing Nuuanu Stream near the Chinese Cultural Center in Chinatown is suffering from extensive cracks and corrosion. Chunks of concrete have already fallen off (this is called “spalling”). Cracks running along the top of the railing indicate more moisture is entering the concrete, so the ultimate crumbling of the railing may be inevitable if nothing is done.

How safe is this bridge? Why was it neglected? What is being done, if anything, to repair the bridge?

I called the city’s facilities management division to find out. I asked if there were repair plans and a budget to fix the bridge. I was told that a report would be made.

After my call an inspector went down to look at the bridge, and I received a call back yesterday. The bridge will be patched. But there is a priority list. Mariners reported trouble with a bridge in Hawaii Kai that has to be fixed first.

Yes, it appears that the city performs repairs when the public alerts them to trouble. If a bridge near you needs to be fixed, better get your phone call in to put it on the list. I couldn’t observe the underside of this bridge, I hope it’s in good condition. The railing appears to be of a different construction than the roadbed itself. Probably the bridge is in no danger of actually collapsing.

Patching is not going to work in this case, except to provide temporary cosmetic improvement, if the problem is now internal corrosion, as I suspect.

There is always a question of whether the cracking and corrosion and expansion of the internal rebar (steel reinforcing rods) is due to defective concrete, poor protection of the rebar, or inadequate waterproofing or protective coating on the structure. Only an expert can evaluate the situation. The result is the same, however: the rebar rusts and expands, exerting tremendous force inside the concrete until chunks crack and later fall off the structure.

If the structure is a building, falling chunks endanger pedestrians below. That’s why you see scaffolding along these buildings. In the case of a bridge, you wouldn’t want to be sitting on the railing when parts of it fall off into the water.

Let’s look at some photos I snapped with my camera phone this past Sunday. Any of them may be clicked for a larger version.

This picture is taken from the Chinese Cultural Center side of the bridge. The supporting post in the foreground has spalled—a piece of it has broken off, perhaps falling into the water. The rebar is exposed and obviously corroded. Farther along, a chunk is missing under the railing.near the next post. 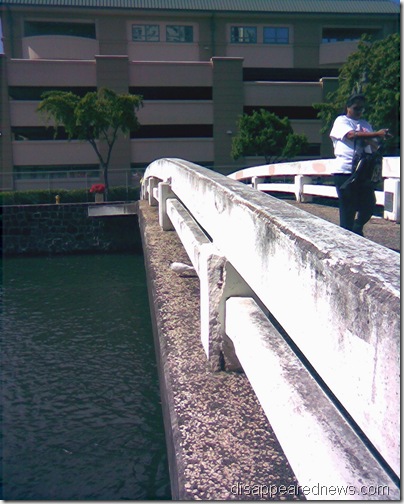 This post shows exposed and corroded rebar, with additional cracks. 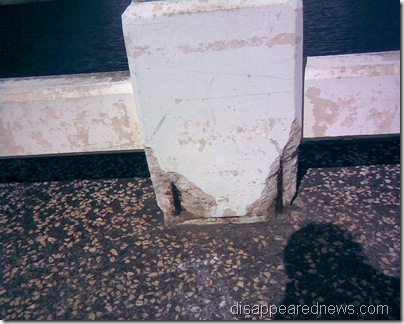 Leaning over the railing at mid-span to get a better view of the chunk that fell off visible in the first photo, the camera also picked up wide cracks along the outside of the railing. You can see what might fall off next as the internal rebar continues to corrode and expand. The cracks are wide enough to show even in this cellphone camera photo.

Is this dangerous right now? Will the railing crumble today or tomorrow? Probably not. But left unrepaired, it appears that the railing will continue to fail. 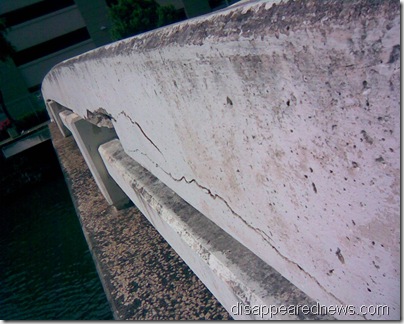 Another post is crumbling. The exposed rebar is corroded. 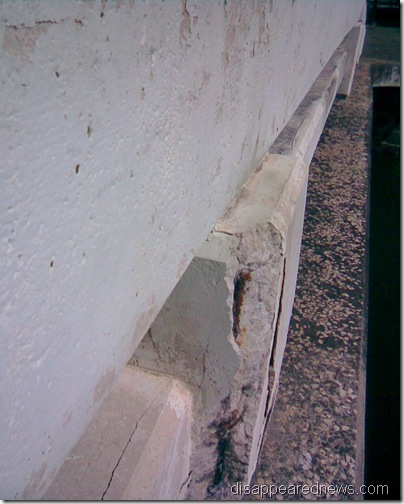 This is what the top of the railing looks like. Cracks run practically the entire length, allowing rainwater and humidity to enter. Inside is the rebar, rusting and expanding. 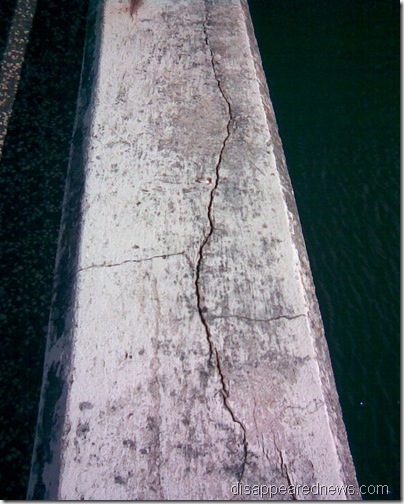 Rust and cracking are visible in this photo. Other photos not posted here also show rust stains indicating that the rebar is extensively corroded. Cracks in the upper section run horizontally on both sides of the railing in places. Can these railings provide support to someone who might lean or sit on them, or are they waiting to crumble and fall off by themselves? 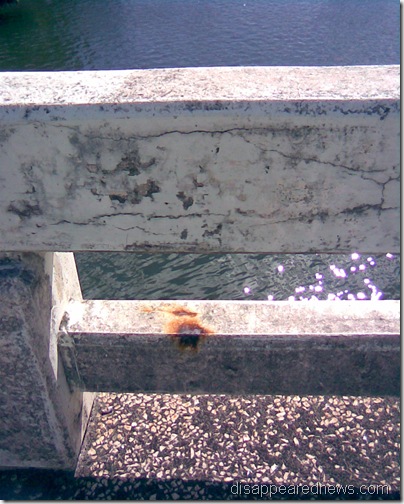 While seeking an expert to comment on the photos, I checked a book on concrete repair (no, not Google, an actual book). Here is a description of the expansion of the internal rusting rebar:

…the considerable increase in volume of the steel when it is converted into rust; an increase of between three to four times the original thickness of steel.

The rust which occupies about 3-5 times the volume of the original meter exerts considerable pressure on the concrete. This causes, first, the formation of fine cracks which gradually increase in width, and then pieces of concrete start to be debonded and eventually break off (spalling).

It is therefore necessary to carefully examine all exposed concrete for the presence of these fine cracks, generally in line with main and/or secondary reinforcement.

For buildings, there are codes that establish the maximum acceptable crack width in parts of the structure. This isn’t a building, but the cracks are also far wider than the 0.3 mm range considered acceptable by the building code. The Chinatown bridge cracks are wide enough that not only is rainwater leaking in, but parts of the structure have already fallen apart. The deterioration seems to be well past the “fine crack” stage.

While the cracking and spalling may be due to the rusting of the internal rebar, the book described how that might happen. It could have been inferior concrete used in construction, or poor waterproofing and maintenance, or any of a number of other causes.

Looking at the bridge today, there should be questions of how it was allowed to deteriorate to this condition. It’s another example of poor maintenance practices in Honolulu, whether we are looking at a bridge railing or sidewalks or roadways. Yes, I’m thinking of “rail” as well as “railing” and what will happen if an elevated structure is maintained as poorly as this bridge. Chunks of concrete falling into the water are one thing, but chunks falling from the sky are another.

It is safe to say that the condition of the Chinatown bridge railing represents neglect. The question now is what, if anything, needs to be done about it.

The photos show extensive cracking along the entire length of the top and sides of the railing. Each day it rains, new moisture can enter the crack and further corrode the rebar inside. The rebar will continue to swell and expand until more chunks of concrete fall off. Perhaps someone will be sitting or leaning on the railing when that happens.

Is it really appropriate to just patch over the cracks and leave the problem to be fixed in the future? An expert would have to say. Perhaps patching and painting today and budgeting for repair in the future is the way to go. Will the spalling continue, under the paint? Will someone be injured if a railing they are leaning against crumbles under their weight?

If the rebars are corroded and concrete is spalling (as appears to be the case with this bridge), then to repair seems to require the removal of the concrete down to the rebar, clean the rebar, and replace with new concrete. At least, that would be the repair prescription for a building that an expert might recommend. For a bridge, it may be far more economical to remove and replace the railings entirely.

There’s a revitalization campaign underway for Chinatown. I hope they will look at this and other bridges and structures and be sure that sufficient budget is allowed to repair structures that are not only unsightly but possibly unsafe.

Thanks, Larry,for the excellent example of how the city handles maintenance. Can you imagine the horror of the upkeep of the proposed over 5 billion dollar rail? I don't think that we taxpayers even want to give the city an opportunity to let it(rail) deterioate like everything else. It's best to stop the rail project now.


Yay Larry! Our (only?) investigative reporter!


Looks like we just found a great way to spend the stimulus money.


OK, Larry. I can tell I'm not welcome in the forum here as I don't see even my positive comments "approved".
Ah well...keep up the (mostly) good work...

Claudia, that's not it. Your comments consist of a single, short line and a link, and so are marked as "comment spam."

This one got through -- no link.


Oh, I see Larry. Thanks for the tip! Keep up your good work for our island.