The uglification of Honolulu

The other day we observed that driving back home from the Olive Tree in Kahala, we didn’t encounter a single pothole. Well, it’s an election year, perhaps that explains it. 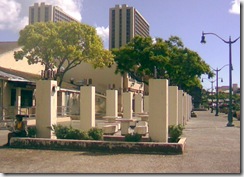 Still, there are reminders that Mufi really doesn’t care. Honolulu residents can identify the picture at the left even if they haven’t visited Chinatown in a year or two, because it was in the papers. Tourists have no idea what the ugly posts with the stupid metal brackets at the top really are.

These are what’s left over after Mufi took the tops off in order to reduce gambling or drug dealing or something. And indeed, they are ugly. It’s been a long time, and the tops have neither been restored nor the posts taken down. The gambling continues, though, when the sun goes down and it’s not so hot. Both sides of the river are ruined by these ruins.

What could have been a pleasant riverside walkway has been uglified.

The locals know that Mufi did this, though some blame Caldwell. I have no idea who is actually responsible. Hizzoner wants to be governor, though. If this is how he shows he cares, I hope voters are wise to it.

Now, Mufi is synonymous with “rail” these days. Several critics, including your humble blogger, have questioned whether the overhead rail will be properly maintained, given this city’s reluctance to do preventive maintenance. Here’s an example. 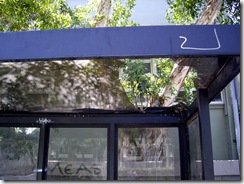 This is a picture of the roof of the bus shelter in front of the Nuuanu YMCA. It’s not a great picture, but see if you can make out that the roof is broken open. It’s been broken for all the years I’ve lived nearby. The other day I noticed, when I got off the bus, that a little tree is now growing in the crack at the back of the hole. See if you can make it out. Sorry the picture isn’t better.

The rain pours in on those waiting for the bus and no one cares to fix it. For years it’s been that way. The little tree will grow and prosper, it has not been disturbed so far.

Not too far away is the broken sidewalk I’ve mentioned  a couple of times. There’s a hole that goes partway to China, filled with leaves so that someone walking near the fence or riding a scooter or wheelchair could fall into it. Now, that sidewalk may be a state responsibility because it is on Pali Highway, but if I’m not mistaken, they contract with the city for maintenance. Which hasn’t happened.

I really envy Joan Conrow’s “musings” over at her KauaiEclectic blog. She always starts with something natural and beautiful in her environment. Sure, I don’t expect that in downtown Honolulu, since I choose to live in the city. But I’ve been to Portland and other cities where they really care. Where broken things are fixed, as far as I can tell, and where they go so far as to keep the paint in the crosswalks fresh. Where they provide benches for citizens to sit down, and even flower beds just for beauty. Where the trams and buses are clean, the bus shelters have displays telling where the bus is and how long till it gets there. In fact, they even have maps of the route inside the shelters! How radical is that. Like, they actually tell you where the bus is going. And there’s a schedule, and the time of the last bus if it doesn’t run all night.

In Portland, if you ask, the driver will drop you off between stops near your home, handy at night if you’re alone.

Portland seems to care. Mufi seems not to.