A Star-Advertiser story (paywalled) this morning (12/30/2017) announced the release of the Hawaii Sea Level Rise Vulnerability and Adaptation Report.

Expecting grim reading, I was not disappointed. From the news article:

With 3.2 feet of sea level rise, Oahu stands to potentially face $12.9 billion in structure and land loss; the displacement of 13,300 residents; and the loss of 3,800 structures, including hotels in Waikiki, and 17.7 miles of major roads due to flooding.

What separates Hawaii from some other Pacific island nations known for trading with stone money is that we have had, so far, a booming hospitality industry. With hotels flooded and beaches washed away, we could be headed for a real wipeout.

We do, however, have a choice about how we plan and execute new development. It’s not rocket science, and we didn’t have to wait for this new report to reveal the hazards of ignoring climate change (see: Welcome to Honolulu 2050, Venice of the Pacific, 9/20/2015). 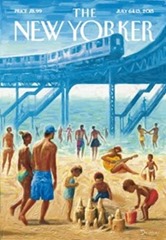 The first question that came to mind as I read the newspaper article was what will become of Honolulu’s fearfully expensive rail project. Will some of the stations be standing over flood waters? (In New York City, the answer is likely yes, since many stations are close to the water line. But our rail line is not yet complete.)

Cranking up the report’s visualization tool, it appears that no station will be threatened by the ocean even with a 3.2 foot rise over the present.

But wait: the tool also has a layer illustrating flooding. The potential flooding area exists today, but flood events will be more frequent and more threatening as the seas rise.

Here is the blank map from the report website for Ala Moana: 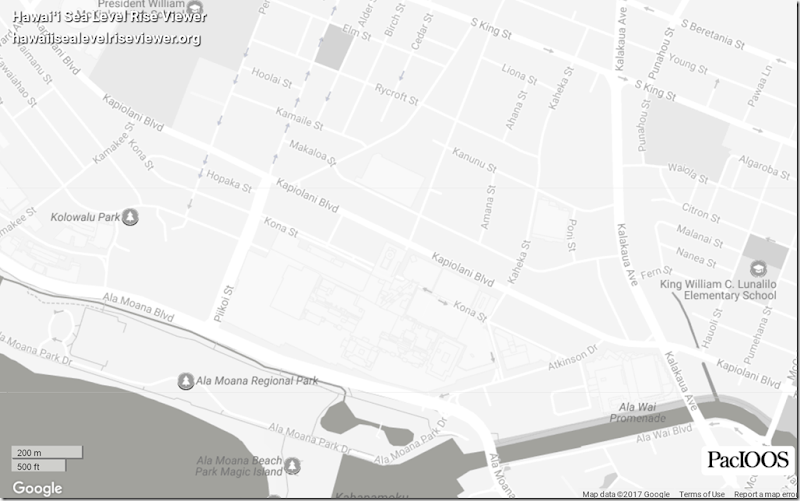 Next is the same area but with the Flood Hazard overlay turned on: 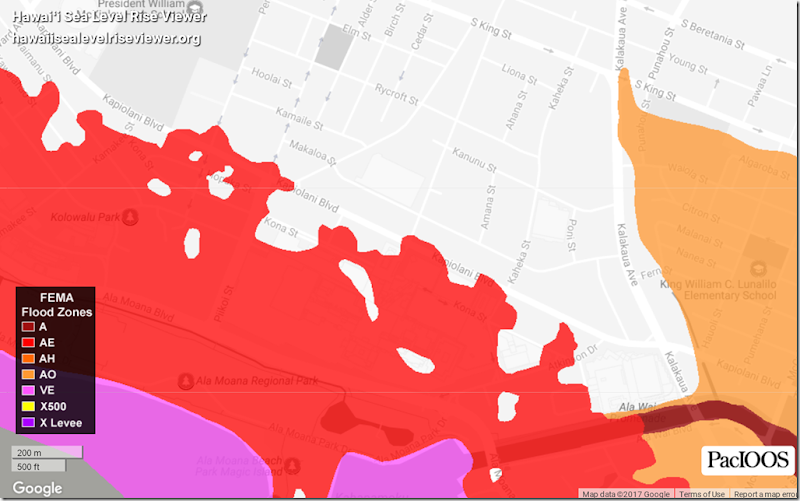 The flood zones are derived from FEMA data. It’s not clear, and perhaps not yet known, how often the hazard area will be flooded. But kiss the Ala Moana rail station goodbye when the floods happen.

Here is the same area with the 2 foot rise economic loss layer activated. Note that the Diamond Head side of Ala Moana Center is pretty much wiped out economically. What this means for the station, I don’t know, but why have a station there if the destination will no longer be desirable? 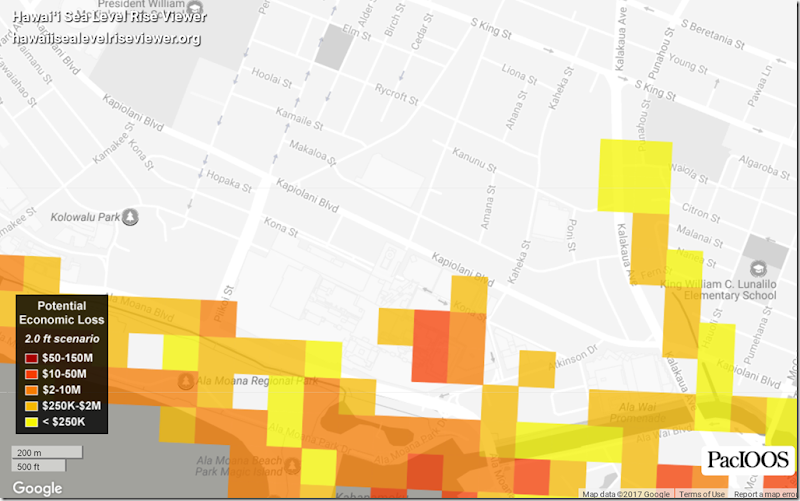 Note also the potential loss of those pricey condos facing the ocean on Ala Moana Blvd.  Sorry, snowbirds.

Even the economic loss at 1.1 foot of sea level rise would have some impact according to this overlay: 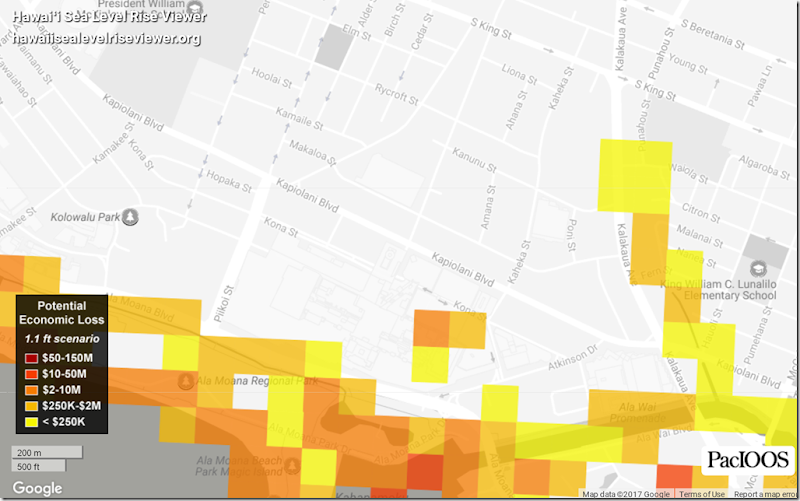 Moving on now to Pearl City, where another rail station is to be located: 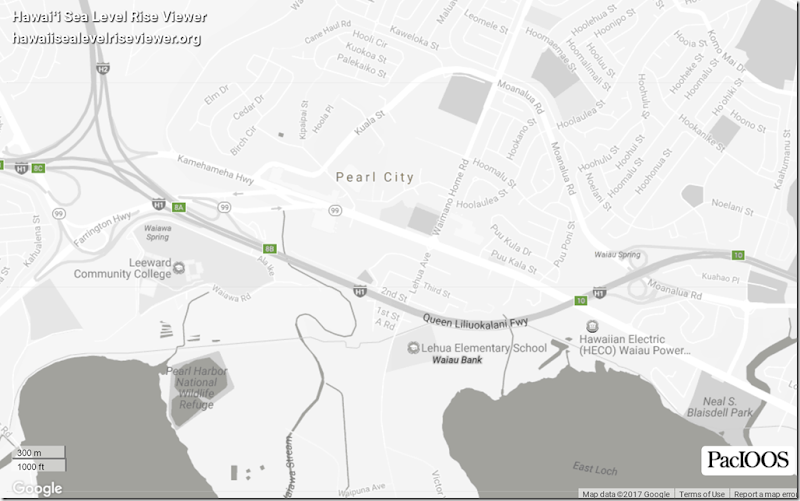 The rail station is planned for Kam Highway near Kuala Street, just to the left of where it says Pearl City on this map.

Here’s the flood zone map for the same location: 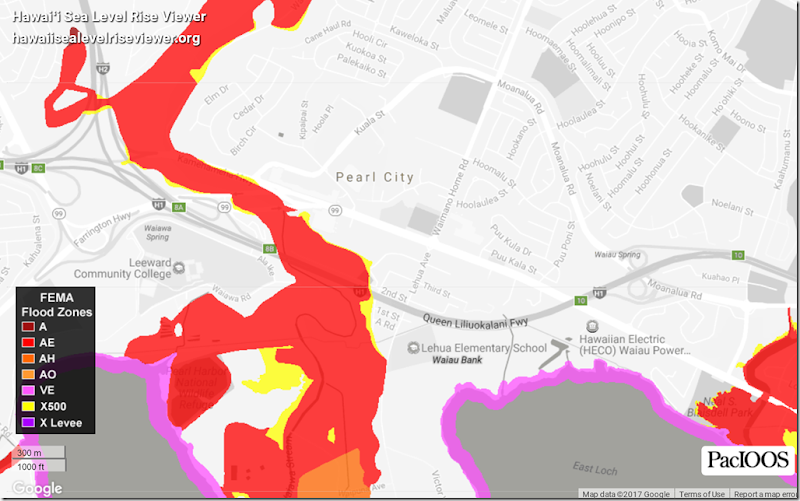 The rail station is just inside the edge of the flood zone. But remember: this is today’s data. The zone is not going to shrink.

The station is just at the edge of an area marked for economic loss – even for as little as a 0.5 foot sea level rise. The loss area increases as the higher level overlays are selected. Check it out.

Certainly, predictions are better crafted by the experts. We, the taxpayers, who are being made to pay for this project, have an interest in hearing, from a neutral source, what the projected effect on so-called “Transit Oriented Development” will be as the sea encroaches on Oahu.

I don’t know the implications of siting a rail station at the very edge of what is to become an economically blighted area, but I think it’s safe to say that developers are not going to be willing to build any “affordable” or any other housing there.