“
[Ethics] bills to close loopholes and tighten restrictions died mysteriously at the end of the legislative session….[Rep. Matt] LoPresti also didn’t offer any particular insight into why his bill died, or into why the other measures related to ethics and lobbying were deep-sixed. “I don’t know why half the things here die,” he said. “It’s a mystery.”—Civil Beat: Hawaii Lawmakers Again Balk At Ethics, Lobbying Reform (5/23/2016)
”

Earlier articles in this  series (start reading at the bottom of the list):

I'm sticking with my model of the Hawaii state legislature as a feudal system, with the shogun at the top and each committee chair as a 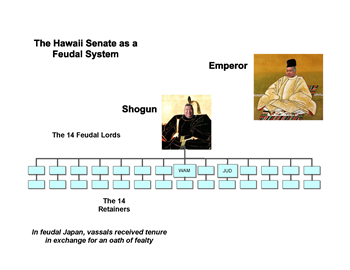 This is not the model that is taught in classes or seminars that purport to explain how the legislative process works, but without this understanding, true reform and democratization of the system isn’t possible.

The figure (“Emperor”) at the upper right is the governor, who is powerful but not directly involved in the legislative process.

An explanation of the legislative process provided by the Public Access room includes a little box at the upper right with this information:

Often the House Rules, Senate Rules or Joint conference procedures specify that a legislator who has voted against the measure will not be appointed to the conference committee. This is one of the reasons that a legislator in opposition to a measure may choose to vote 'aye with reservations' rather than against the measure. In this way, that person can still be eligible to serve on the conference committee, and can then attempt to have input on the bill's final form, or work to prevent a final compromise from being reached.

Although Rep. LoPresti, in the pull-quote above “didn’t offer any particular insight ” into why ethics bills died last session, the cause is easy to discern. And he knows it, too.

Legislative leadership did not want the ethics bills to pass but didn’t want to appear opposed to them publicly.

So allowing the bills to progress through the session, supported by testimony offered by good government advocates and organizations. So far so good. It makes it appear that the legislature backs ethics reform. Of course, this is a sham. Legislators know that the bills will never become law.

When a bill has made it through each house of the legislature it is likely to have some differences, large or small. One house may simply say (as directed by its leadership (shogun) that it accepts the wording of the other, and the bill will be sent off to the governor.

If that doesn’t happen, then a conference committee is appointed, ostensibly to iron out differences and produce a compromise version of the bill.

So a bill that has made it successfully through many arduous committee hearings and floor debates should ultimately be sent to the governor, right? Wrong. Not when the shoguns decide otherwise.

This is an example of the dictatorial power the shoguns wield. Democracy dies behind the closed doors of the secret conference committees.

The Legislative Reference Bureau was completely honest in its explanation of the conference committee process in the box at the upper right, which is snipped from one of their publications. Note the last sentence admits that conferees may not actually be working to reach a compromise at all. Instead they may “work to prevent a final compromise from being reached.”

The box describes a process that is often used to kill a bill, and one that the public doesn’t understand. In fact, all those hours waiting to testify at one committee after another, the time lost from work to be at the State Capitol, all that airfare to come from a Neighbor Island to Oahu to give testimony, it all is wasted on a sham process if the shoguns plan to kill a bill in conference anyway.

The use of conference committees in this way cheats the public of its time, money and energy and ultimately robs us of the representative government 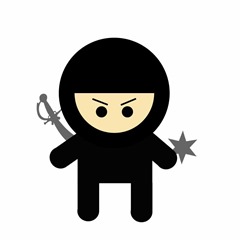 promised by the state constitution.

Since the shoguns appoint committee members, they can appoint “ninja assassins” whose purpose is not to reach a compromise, but instead are assigned to simply make sure the bill doesn’t get out of the conference committee alive.

We’ve seen in an earlier article how committee chairs can simply kill (“defer”) a bill or refuse to hear it at all, for no good democratic reason. Imagine, if you will, that a committee chair (daimyo) has accepted thousands of dollars of campaign contributions over the years from special interests (ag chemicals, medical insurance, etc.). How better to serve those interests than to manipulate the process so that a bill that threatens them will never move forward in the session?

Another way, if a bill is very popular for example, is to let it move along knowing that it will never make it out of a rigged conference committee hearing. That was the fate of the ethics bills in the 2016 session.

The box above describes a subterfuge, a deceit, a deception. It also reveals that decisionmaking is carried out by legislative leaders quite independent of the public process. In other words, testimony and the will of constituents can be safely ignored because killing a bill in conference is easy and no individual legislator will be blamed.

The opportunity for special interest influence blossoms here. Lobbyists know that if the shoguns assure them a bill will not pass, it will be killed by the ninjas in the end.

Other reforms (for example, curtailing a committee chair (daimyo) ‘s power to kill or not hear bills) are ineffective if the shoguns can simply send their ninja assassins to kill or perhaps neuter a bill in conference at the end of the session.

The use of conference committees in this way is shameful and should be a priority for reform. Good government groups, where are you on this?