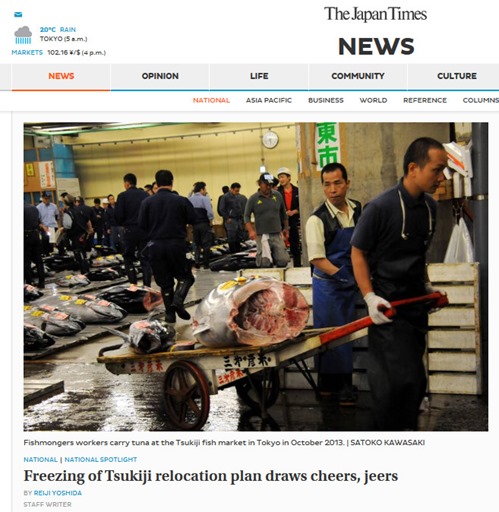 It really is a sad story of bureaucratic mismanagement and incompetence.

No, not the Honolulu rail project, this one is in Tokyo Japan.

The 81-year old Tsukiji fish market was to be relocated to a new site at Toyosu, but the new site, constructed at great expense, is unusable. The relocation has been halted, at great expense.

There’s one thing that it does have in common with our poorly planned rail project (and I use the word “planned” reluctantly, since parts of the rail project were never actually planned): lack of stakeholder input.

“People who don’t know anything about a fish market designed the Toyosu site. We were never consulted,” said Tai Yamaguchi of Tsukiji-based fish merchant Hitoku Shoten.

Read the Japan Times article, here. For one thing, it will take your mind off our own problems for a moment. For me, as someone who worked for many years just a stone’s throw from the original Tsukiji market, it is, as one might say with Japanese understatement, regrettable that such terrible mistakes were made.

It didn’t have to be that way.

Many also complain the shop spaces allocated to them are smaller than those at Tsukiji. The smallest shop compartment is 1.5 meters wide. Some tuna wholesalers have lamented they cannot even cut the huge fish in their own shop.

The drains are too small to handle the water and scrap runoff. And the soil restoration under the buildings (the site was contaminated with chemicals from a gas plant that occupied that location) was never done. No one knows where they will park their trucks.

Back in Honolulu, the lack of community input and direction to the rail project with regard to route or type of transport and the neglect to calculate the cost of ducking the high-voltage power lines is also “regrettable.” But can we regret on an ongoing basis the failure to even estimate running costs, for example?

We’re watching an expensive failure that is still in motion.