“
The decision [on a rail route] capped a wild week of political maneuvering as supporters of other paths scrambled for votes, and angry constituents bombarded council members with phone calls and e-mails.
”

Should it really be a surprise that putting an elevated train through Dillingham Boulevard is going to be a huge problem and expense?

Dillingham Boulevard itself isn’t very wide. When the route was chosen (more on that below) it certainly was known to everyone that the various high- and low-voltage lines and poles as well as the telephone wires and all the rest would have to be dealt with. The costs should have been figured in and plans made to complete the work. 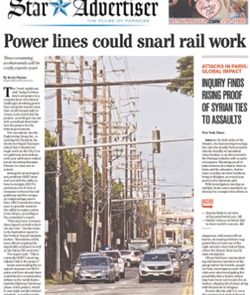 So this morning’s front-page story and huge, space-eating picture should not have been necessary. Nor should a headline be needed reporting that “Power lines could snarl rail work.”

In an alternate universe (that is, any other universe but ours) either this would have been accounted for or a different route chosen.
So how was Dillingham Boulevard chosen, anyway?

Not to suggest that there is no sense to the route, but at the same time, remember that the chosen rail route was not a result of citizens getting together to plan their urban environment, part of which would be choosing preferred transit routes and modes. No, none of that happened. Instead, the route was a political choice, made by politicians whose campaigns, we should have known, were funded by development interests. See the recent story, Culture of corruption deeply entrenched in Honolulu City Council (10/27/2015) for how it works.

Here’s a better illustration, from a 2007 newspaper story. Note that urban planning had nothing, absolutely nothing, to do with how decisions were made:

The decision capped a wild week of political maneuvering as supporters of other paths scrambled for votes, and angry constituents bombarded council members with phone calls and e-mails.

Apo had tried to steer the route back to Hannemann's original proposal of going past the airport by tacking on promises that later links to Salt Lake and UH-Manoa would be top priorities.

Djou, Garcia and Tam joined him yesterday. But the vote fell short when Okino, who had come up with the Salt Lake compromise last week, refused to abandon that route.

Doing so would have stabbed Cachola in the back, and someone else would then almost certainly have switched his or her vote to kill the route anyway, Okino said.

"Obviously, the airport is the better route, but this is political reality," Okino said. "I think we got the best of what we could have gotten."

Cachola said he was "ecstatic" that the Salt Lake route had held up despite the attempts to alter it.

"I'm on cloud nine," Cachola said. "Salt Lake is the best route, for the greater good."

He said an airport link should be built only if the system is later extended into Waikiki.

An even better illustration of the universe we inhabit in Honolulu is this snip, in which a train stop in flooded Mapunapuna is pushed by Romy Cachola, unabashedly acting in favor of development interests:

Landowner says rail stop there could spur redevelopment in area
...
A train station could help redevelop the area for increased industrial, commercial and residential use, according to Reit Management & Research, which manages 150 acres of Mapunapuna land for Massachusetts-based HRPT Properties Trust. [Honolulu Advertiser, 5/14/2008]

At least this article is honest about the push for development. Doesn't "REIT" usually mean "Real Estate Investment Trust?"

I wrote at the time:

As it is now, we, the people, are paying taxes for a transit system that is being built to satisfy the interests of developers. Yup, we pay the excise tax, they profit from it.

Is it fair that we pay Mufi's train tax in the supermarket so that a Massachusetts investment firm can make a big profit from our transit system??

Only the public is repeatedly surprised

I wrote in a 2008 article that voters, that is, citizens of Honolulu, have been completely left out of transit planning:

This is what happens when developers and development are the prime movers for a public works project. Yes, what we have is not "Transit Oriented Development." It is more accurately "Development Oriented Transit."

There will certainly be more surprises (for the public) down the road. HART and the city administration will not be surprised—their challenge is to push the project forward when the obstacles that they already know about come to be revealed. Yes, they knew about the Dillingham Blvd. wires. And they know how bollixed up traffic will be in the whole area when they get started with their construction there. Dillingham Blvd. is not very wide. In any case, the wires need to be dealt with, and there is also a HECO substation there, a wiring nightmare.

One of the coming surprises may be that there will not necessarily be a boom in truly affordable housing as a result of fictional “transit oriented development.” It could happen, but left to themselves, developers (and their handmaidens on the City Council) will choose the most profitable use of the land.

As usual, I would love to be proven wrong.