Rail stations in inundation zone? Make it a feature, not a fault

In a June 29, 2015 article I sarcastically suggested, inspired by a New Yorker magazine cover, that running Honolulu’s rail along the waterfront would be, by 2060, a feature, not a fault: 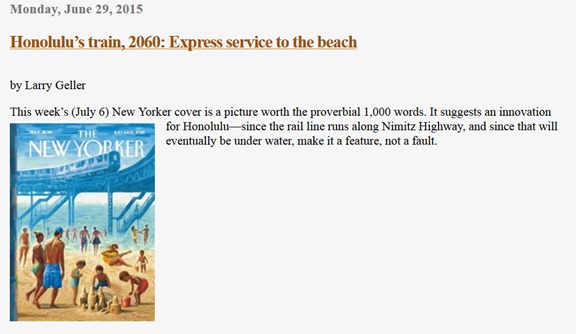 Honolulu would join New York in being able to transport tourists directly to the beach by public transport.

Seriously though, and it is serious—the current meltdown of Rail planning is not the result of any surprises at all. It is the result of a project hatched by politics with the complete absence of urban planning, especially planning which involves citizen participation.

In the wake of yesterday's 5-4 City Council vote approving the first phase, Mayor Mufi Hannemann said he was "very confident" that construction would begin by 2009.

"The key to this was to be willing to compromise, to be able to give something to get something," Hannemann said.

The council voted to retain a controversial route along Salt Lake Boulevard rather than immediately link the system to Honolulu International Airport.

The 20-mile route selected yesterday would begin near the planned University of Hawai'i-West O'ahu campus and end at Ala Moana Center.
…
Hannemann allies unexpectedly had swapped the airport link for Salt Lake Boulevard last Wednesday to win a crucial swing vote from Councilman Romy Cachola that kept the project alive.

The 2007 story is worth reading. Urban planning? None. Another snip:

Apo had tried to steer the route back to Hannemann's original proposal of going past the airport by tacking on promises that later links to Salt Lake and UH-Manoa would be top priorities.

Djou, Garcia and Tam joined him yesterday. But the vote fell short when Okino, who had come up with the Salt Lake compromise last week, refused to abandon that route.

Doing so would have stabbed Cachola in the back, and someone else would then almost certainly have switched his or her vote to kill the route anyway, Okino said.

My own preferences were for light rail or rail-like enhanced bus systems that could link through to Waianai. First of all, people live out there who work in town or in Waikiki. But most of all, the entire corridor would likely see an explosion of retail and commerce that would be of immense benefit to the community.

Wai'anae resident James Manaku Sr. said he did not believe the system would ever help the Leeward Coast.

It’s certain that our now-$8 billion elevated rail will not be extended to Waianae. Heck, it doesn’t actually even go into Kapolei.

The above Waianae resident’s words rang true as the City Council debacle proceeded:

Romy Cachola was at it again:

Transit stop sought for Mapunapuna
Landowner says rail stop there could spur redevelopment in area
...
A train station could help redevelop the area for increased industrial, commercial and residential use, according to Reit Management & Research, which manages 150 acres of Mapunapuna land for Massachusetts-based HRPT Properties Trust. [Honolulu Advertiser, 5/14/2008]

Those who know Maunapuna know how wet it is now and may wonder whether it will be even inhabited by (say) 2060 or will be some kind of lake.

Yesterday’s Star-Advertiser front-page article seems to indicate that HART, the  Honolulu Authority for Rapid Transportation, is itself being thrown under the bus. Although routing was determined without planning input but instead by spats among City Council members, HART could have railed (sorry) against the mandate handed to it, but did not. There were many red flags by the time they took over, including the power line issues and appropriateness of the route in view of global warming, sea rise, and storms.

We questioned in 2008 whether global warming was being considered as the rail route squabble advanced (see: Commuting to work in galoshes, 2/18/2008).

If newspaper readers can visualize dollar signs flying by faster than a speeding bullet train, they should also understand that it will be up to all of us to apply the brakes. HART’s charge is to complete the project, not to scuttle it. As to the Mayor or City Council, it would be death to their individual careers to just say Oops! and walk away from the project. As long as taxpayers allow the City to pick their pockets, Rail will advance. Somehow.

Watch also for the possibility that City officials let HART pull the plug on the plan so that they don’t have to. Or it might be rigged so that the feds pull their funding and can be blamed for terminating the route.

The recent re-emergence of the power line issue is but another example of the stunning lack of sound planning. Even the proposed benefits have been cons on the public. Strong words? What about the claims of traffic reduction, when the same number of cars will be entering the downtown business district and Waikiki each day after Rail would be completed as before? What about the promise of affordable housing along the rail route when none is planned? (Show me a plan designating the number of units, their location, and guaranteed rental costs.)

As to the wires, those high-voltage power line poles did not suddenly spring up along Dillingham or elsewhere on the settled route.

The City Council knew the wires were there, as did HART when it assumed responsibility.

“Whoever planned this had to have known they would have problems with this,” Honolulu Authority for Rapid Transportation Board Chairwoman Colleen Hanabusa said during a special public meeting Tuesday to discuss the costly overhead utility line clearance problems that are helping to significantly drive up costs for the project.

Speaking of leadership: HART’s new chairwoman Colleen Hanabusa, according to today’s news, has set a different destination for herself—the US Congress. Can she handle the current HART meltdown at the same time as she runs for Congress, or will the city be looking for yet another HART chair? Wouldn’t she be wise to distance herself from the stinking rail quagmire? Prior chairman Don Horner resigned before the quicksand could swallow him. Will Hanabusa save herself?

Speaking of planning: it’s easier to fix blame than to find evidence of sound planning. Yet the commercial media hasn’t gotten around to sorting out who is responsible for the current problems, and so Honolulu is still saddled with leadership that remains unaccountable to the public. A lesson needs to be taught and learned—that those who would set public policy through uneducated squabbling should not be allowed to continue that kind of leadership or be allowed to commit taxpayer funding. 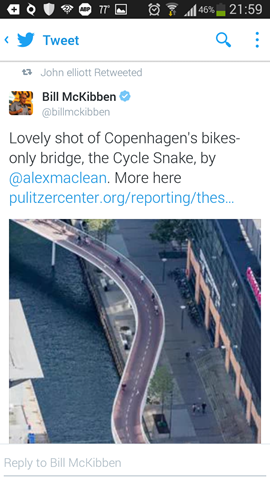 [With tongue mostly in cheek, I suggest we could find uses for the elevated structure completed so far. See the “Cycle Snake” tweet to the right.]

By starting a proper citizen-inclusive urban planning process we can determine the best thing to do from this point onwards to bring rapid transit to as much of Oahu as we want, and at reasonable cost.

Portland’s enviable transit system is the product of a planning process that delivered real dividends to its citizens. For example:

[quoted in Portland puts in transit extension for about what Honolulu wastes in delay costs, 10/11/2012]

Anything beats leaving our transit plans to our City Council to squabble over.