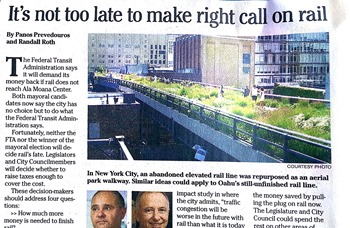 An op-ed in today’s Star-Advertiser is headlined “It’s not too late to make right call on rail” and is accompanied by a picture of New York City’s “High Line”, which is a disused elevated rail line repurposed as a public park.

The High Line, featuring innovative seating and other attractive features for individuals and families, is very popular among residents and tourists..

The Honolulu rail guideway is a bit narrower than the High Line but it might work anyway. 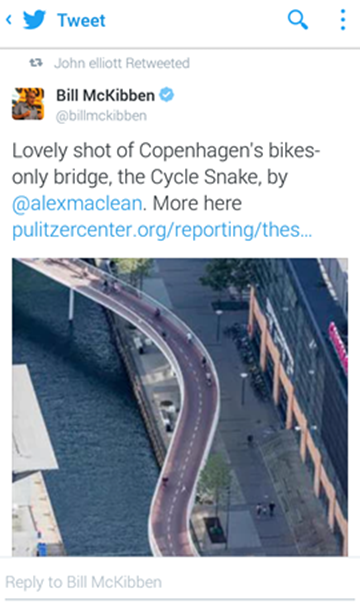 Great minds think alike. In May, with tongue firmly in cheek, I suggested we could emulate Copenhagen’s elevated bikeway.

Commuters could avoid traffic, get exercise, and not be packed like sardines into a hot train car to and from work.

Just leave what’s built as is, but provide entrance and exit ramps for the bikes. 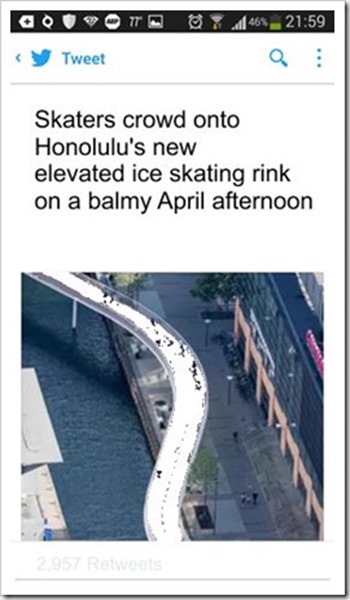 It could transform an eyesore into a unique recreational resource eyesore, anyway.

As you read the op-ed in today’s paper, keep in mind that this elevated rail line/bike path/skating rink was to cost less than $3 billion initially, and now upwards of $10.5 billion is commonly cited. If you think my suggestions are crazy, please note that the real thing became crazy at some point and we’re still not laughing.

I wonder if Guiness recognizes a world record for cost overruns…

Thanks for verifying that my memory (of the $3mil figure) is not totally faulty!