“
On 10/14/14, at 1400 hours, a meeting was called by First Deputy Russell Suzuki at his office located at 425 Queen St. The attendees in this meeting were First Deputy Russell Suzuki; the Executive Director of the Campaign Spending Commission, Kristin Izumi-Nitao; and the general counsel for the Campaign Spending Commission, Gary Kam. Kristin Izumi-Nitao and Gary Kam reported that House of Representative member James Kunane Tokioka; his treasurer, Ian K. Caitano; and the Friends of James Kunane Tokioka, violated various Campaign Spending laws of the State of Hawaii. 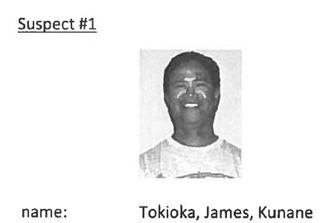 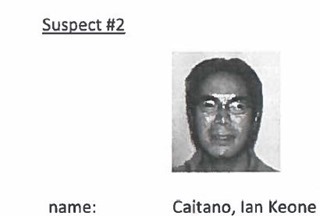 Disappeared News obtained an Attorney General’s report under a UIPA (Uniform Information Practices Act) request that reveals details of the accusations against State Representative James Tokioka and his treasurer, Ian Keone Caitano brought by the Hawaii Campaign Spending Commission. The report identifies a lobbyist who ran fundraisers for Rep. Tokioka and suggests the extent to which Tokioka handled the details of contributions by himself.

[Note: this article reports on some details of the investigative report and does not imply guilt, innocence, or anything at all; readers are invited to read or download the full report posted below.]

Tokioka ultimately pleaded no contest to a misdemeanor charge of failing to file a complete campaign spending report, was required to pay $1,000 to a victims' compensation fund, and under a plea deal arrangement served no jail time and will have the deferred misdemeanor plea wiped from his record in six months.

At the time the case was concluded the Attorney General’s investigative report had not been made publicly available. Disappeared News has obtained a copy as a public record. The report sheds far more light with regard to the charges against Tokioka and his campaign treasurer than has appeared in prior news accounts.

One Civil Beat report, for example, revealed only that:

“The Department of the Attorney General, working in conjunction with the Campaign Spending Commission, determined that Representative Tokioka recklessly filed candidate committee reports that were not complete and accurate.”
…
Tokioka reported not receiving any campaign contributions in his original July 10 filing of his preliminary primary report, which covered Jan. 1 to June 30, 2014.

From statements in the investigative report, it appears that Rep. Tokioka kept close control over contributions at his fundraisers without involving either the person organizing the event nor his own treasurer.

Person who ran fundraisers identified as a lobbyist

The AG’s investigation report identifies Stefanie Sakamoto as Tokioka’s fundraising coordinator for the event he held on Oahu at the Mandalay Restaurant on March 18, 2014 (see the report below, page 20). At various places in the report Sakamoto’s name either appeared explicitly or was redacted. Sakamoto was described as:

[Redacted] could not recall how many fundraisers she organized for Tokioka, but thought it was maybe two, during this past year and maybe the year before, I could not remember. [Redacted] related she did not know why he held fundraisers in Honolulu instead of Kauai. But stated they usually do during (legislative) session. When asked, "So this one, again, he didn't ask you, you just did it on your own?" She stated, "I think we planned it together. Myself, the representative (Tokioka) and it was a joint fundraiser with Representative Kawakami and Senator Kochi."

With regard to “Suspect #2,” Ian Caitano,

[Redacted] was asked if she was familiar who the Treasurer was, she stated, "Ian." When asked if he was there , [Redacted] stated, "I don't think so." When asked, "Did you plan it with him also?" [Redacted] replied, "No, I've never met Ian." [Redacted] related she did not know how it is that the Treasurer is not informed as to what type of fundraising is to take place, because he ultimately is the person who is supposed to be responsible for receiving the contributions.

Continuing, the AG reports that Sakamoto indicated that Tokioka handled the money and probably the signup sheet with the names of attendees. Sakamoto denied that she was responsible for handling the money, only for organizing the fundraiser.

The AG also investigated a check from Altria that was listed as coming from G. A. Red Morris that was an item of concern. For this and other details, please skim the full report, below.

Rep. Tokioka’s treasurer apparently kept in the dark about fundraisers

As to “Suspect #2,” it appears from his statement that Rep. Tokioka did not keep his treasurer in the loop with regard to his fundraisers:

When questioned by CSA [Chief Special Agent] Hanagami, whether he attended any of Tokioka's fundraising events, Caitano stated,"... no, I haven't." CSA Hanagami queried, "Okay, not even the one that Stefanie Sakamoto..." Caitano replied, "No." When asked if Tokioka apprised him of any fundraising coming up, especially in Honolulu, because Caitano was his money manager. Caitano responded, "No. Generally he wouldn't, inform me, oh, I'm having a fundraiser... he would, prior I would file the fundraising notices and so those I would know because you would have to fill out the form and get him to sign it. So those I was aware of. But, the last few fundraisers he had I was not aware of." Caitano related he did not know about the fundraisers in Honolulu. Caitano related he did not get it directly after the funds, the donations, contributions were collected. When questioned by CSA Hanagami, where the collected funds went. Caitano stated, "I'm not sure who collected the contributions at the event, or if he (Tokioka) received mail contributions around there. I'm not sure who physically received them." Caitano did not know who took them to the bank.

Hawaii Revised Statutes § 11-411 provides that in lieu of administrative determination, the Campaign Spending Commission may refer a matter for prosecution if it believes that Tokioka recklessly, knowingly, or intentionally violated the campaign finance law. Kristin Izumi-Nitao and Gary Kam, after receiving complaints from the public about Tokioka, conducted an investigation by:

a. The subpoena of the bank records of the Friends of James Kunane Tokioka. They identified that Tokioka signed the deposits slips and also deposited the contributions into his campaign account.

b. Tokioka allowed his treasurer, Caitano, to file a zero contribution report by not giving the treasurer the contribution information. Kristin Izumi-Nitao believed that this conduct by Tokioka was, at the very least, a reckless violation of the statute that required the candidates and treasurers to report all contributions and expenditures.

c. Caitano also knew that that Tokioka withheld contribution information from him but decided to file a zero report just to get the report in on time. Caitano intended to amend the report later after Tokioka gave him the information. Kristin Izumi-Nitao, believed based on this, Caitano knowingly filed a false report

in lieu of a $3000 fine to the Campaign Spending fund for his wrong doing, we'll forget it ever happened next year and the AG's "victim compensation" fund gets $1000. sounds like justice has been served and everyone can go back to their business now.