[Thanks to the concerned individual who brought these fundraisers to my attention.] 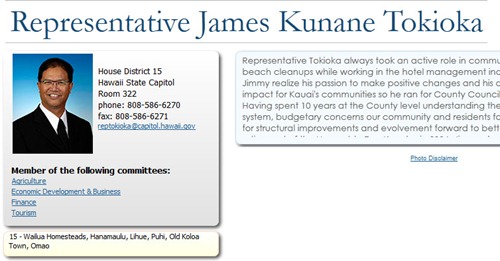 Kauai Representative James Tokioka is supposed to represent his constituents, but when he ultimately files his fundraising reports, we’ll find out to whom he may really be beholden. He has notified the Campaign Spending Commission of two fundraisers. Both are during the legislative session, while contributors may have matters that come before him for a vote.

Both events are far from his constituents—one across the ocean, in fact—meaning that he is seeking corporate, lobbyist or special interest funds. It is unlikely that many from his district will be able to afford the airfare to attend either of them.

Tokioka reported to the Campaign Spending Commission on Wednesday that he would hold a $500 a plate fundraiser on Saturday—in Los Angeles. On the same day, he reported his intent to hold a $100 suggested donation fundraiser on March 19 in Honolulu.

Saturday’s event is really far from his constituents.  How far away? He was to hold it at the Coco Laurent in Los Angeles, which Google Maps locates as quite a bit offshore of Kauai. Kauai is that tiny little dot in the lower middle left of the map. 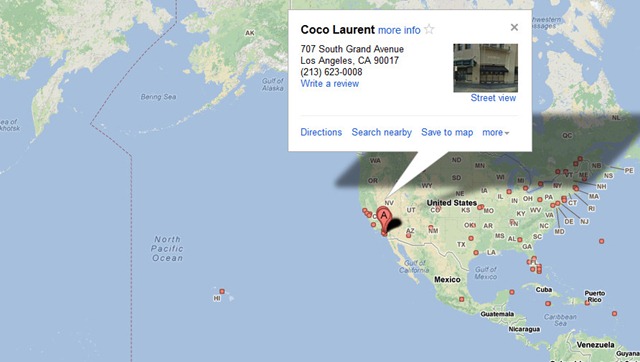 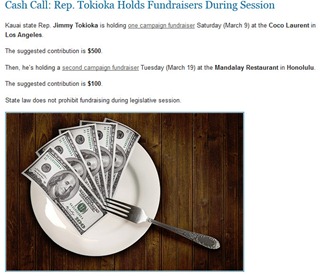 I love good graphics, and Civil Beat posted a great one on their own report of the fundraisers, Cash Call: Rep. Tokioka Holds Fundraisers During Session (Civil Beat, 3/8/2013). Yup, that’s 5 C-notes on the plate.

The Honolulu event is to be held at the Mandarin restaurant, and is more affordable for Honolulu lobbyists, developers and corporations who couldn’t make it to the weekend shindig in Los Angeles. How convenient, especially if they have some bill they need attended to this session.

But for 100 bucks, couldn’t he have afforded the Executive Centre, at least?

It’s easy to mock these fundraisers, but the ethical questions are real. So far, the Legislature has declined to consider any measure that would outlaw fundraisers during session.

That would spoil the parties, wouldn’t it?

Yes and Mr. Tokioka is known to engage in some real ʻpartiesʻ.

Anyone sick and tired of these lawbreaker ʻlawmakersʻ yet.

This is the textbook definition of carpetbagger.


I am appalled. While real people fight real battles in the islands...like the real, true threat & reality of GMO and its resulting chemical contamination of our islands, Mr. Tokioka is off catering to lobbyists--probably the very corporations his constituents were marching against last weekend! I do not trust my vote anymore; we are note being represented. -Dharma Wease