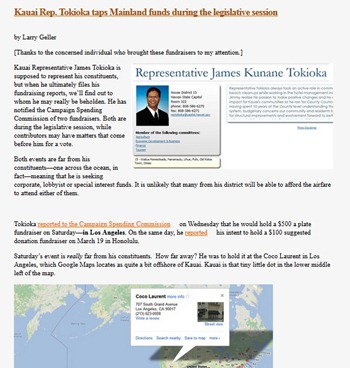 Yesterday I documented a $500 a plate fundraiser held in Los Angeles by Kauai Rep. James Tokioka during the legislative session, when measures benefiting those who can afford that kind of a contribution might come before him. And of course, few, if any, of Tokioka’s constituents could be expected to turn up in LA.

Who, then, could this fundraiser be aimed at? Hmm?

The Mainland party is to be followed by a $100 suggested donation fundraiser in town in Honolulu. Again, far from voters in Kauai.

Little did I know that these were joint ventures. Kauai Senator Ronald Kouchi filed papers with the Campaign Spending Commission (here and here) for the same locations, same days and times as Rep. Tokioka’s big bashes.

How convenient! Busy lobbyists should love being able to knock off two Kauai lawmakers in a single visit. I assume they have to write separate checks, though, a bit of a bother.

I wonder if Kauai voters are aware that their representatives are conducting these extensive fundraising efforts away from home? At a time when “Nearly 90 percent of people in the United States say there is too much corporate money in politics,” what would they think about soliciting big bucks from business, corporations, lobbyists and special interests during the legislative session?

Not only that but they held it on the same day that 2000 people marched against GMOs on Kaua`i in order to get their attention. People on Kaua`i are seething if social media is any indication.


When do these senators have to file with Campaign Spending Commission? As if we couldn't guess who attended ...


And the $500 plate fundraiser was probably attended by the biotech corporations that are poisoning Kauai.