Well, to their credit, the Star-Advertiser sent a reporter to discover first-hand how three Mainland cities achieved success in reducing their homeless population. The trip lead to a couple of good interviews and – surprise – the news (to the Star-Advertiser) that the solution is something called “Housing First.” The paper suddenly used the term more times than in all prior editions combined.

While the article, editorial and an op-ed in the paper are very welcome (and overdue!), one aspect of Housing First is still missing, both from the media and the state and city government pronouncements: that Housing First is not just housing. It is housing with the appropriate supports.

Neither the city nor the state have contracted to provide ACT (Assertive Community Treatment) which is the methodology used to keep many individuals in their homes or apartments, in particular when mental health is an issue.

The paper could have Googled to learn what they did, but heck, the interview was well done and should have an impact. Perhaps Mayor Caldwell and the citycouncilpeople will read it and learn. Maybe the paper will get around to talking about supports. I hope so.

Interestingly, millions of people now know what ACT is because John Oliver included it in a segment on mental health in his program yesterday on HBO. Here’s a snip of that segment. The context is gun control, but ACT is the same when applied to Housing First—it helps keep people who need supports in their homes and yes, I guess, would help prevent some people from shooting others. All good. But it needs to be done. Watch the very short clip.

From an earlier Disappeared News article, here are two slides, photographed in the dark from an extreme side angle from a presentation about two years ago. Sorry about the quality, but they are legible: 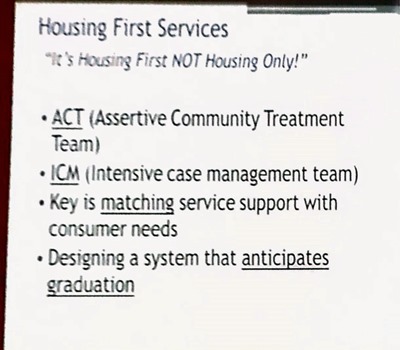 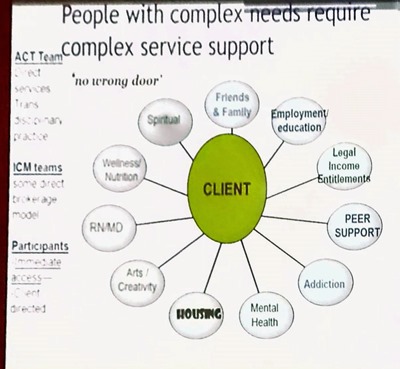 So now you know about ACT services. I wonder if the Governor’s team knows about this? Or do they know about the need for these services but just don’t want to pay for them?

In that event, people will drop out of housing back to the streets, and our leaders will have failed to fix the mess that, after all, they are responsible to have created in the first place.