Continuing “The Conversation” on minimum wage in Hawaii

Beth-Ann Kozlovich invited me to The Conversation on Hawaii Public Radio yesterday morning to talk about the minimum wage—the national fight for $15 and for a living wage, and the new law that took effect this year in Hawaii. To hear the on-the-air conversation, click here. It’s only a couple of minutes.

Since I’ve recently written on the subject here on Disappeared News, let me just post some brief additions. Bart Dame posted an insightful and informative comment on the prior article, which I’ve reproduced at the end of this one.

Here are a flock of tweets from Hawaii Appleseed to set the stage: 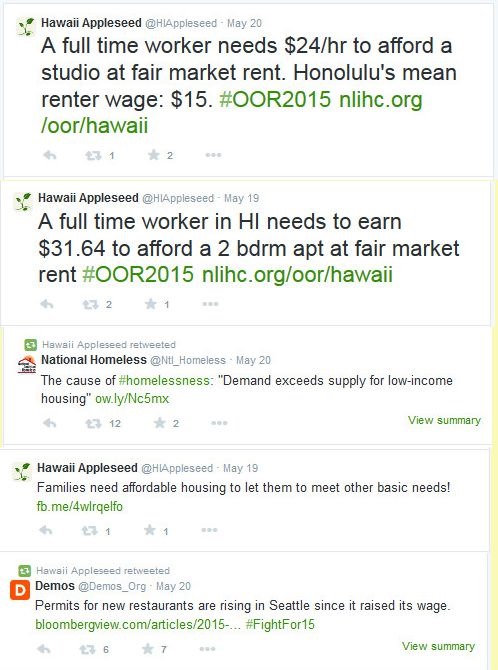 These explain why I was yakking along the lines of “too little, too late.” As Bart explains in his comment, the minimum wage law that made it through the lege was the best that Hawaii advocates could do.

It’s clearly not enough, however.

No argument from me on the effort. In the absence of a popular movement, that was, and is still today, the best that could be done. Which is why it hurts us all that the commercial media have not covered the nationwide movement for $15. We’ve been kept in the dark. Had the national movement made it to our news media, might at least some of us been inspired to press for $15 in Hawaii?

Not that Hawaii’s citizens are in the habit of rising up much anyway (sigh).

Seattle, San Francisco and now Los Angeles got their fifteen. It happened because of the growing movement our newspaper readers were not allowed to know about. It didn’t happen out of the kindness of politician’s big hearts.

Am I trying to foment unrest? I wish I knew how to do that.

The April 15 protest, described by the Guardian as the largest protest by low-wage workers in US history, did not just spring up out of the blue. It was the culmination and the product of all the prior work that made it possible. It was activism that they don’t want happening here.

Who's the “they” is a fair question. Looking at the testimony against our own bill SB2609, the opponents include the Hawaii Food Services Association, the Chamber of Commerce, some business leaders… in other words, the usual suspects. They spouted the false claims that many retailers will go out of business, that a higher minimum wage will cost workers jobs, that the price of food will dramatically go up, etc. Hey—the cost of restaurant meals has already gone up dramatically here, and it has nothing to do with the minimum wage, clearly. The arguments made by business interests are repetitive and demonstrably false—perhaps they think legislators will believe if they just repeat these claims over and over.

The other side of the same coin – (truly) affordable housing

Meanwhile, in New York City, Mayor Bill de Blasio has promised 80,000 new affordable housing units. And he means affordable, unlike the hype here in Hawaii. As a start, developers using available space in three public housing projects may offer half of 10,000 new units at market rates but must offer the other half at rents affordable to low-income households earning no more than 60 percent of the area median income. Yes, 60 percent, not 80 percent, 120 percent or 140 percent, the figures that appear in news articles here. I’m not sure how to compare the “area median income” part, because obviously that depends on the “area.” If it’s narrowly defined around the NY housing projects, then even the median income could be lower there than here.

New York tenants can be protected by rent control or rent stabilization, regimes we don’t have here in Hawaii.

But think of it: 10,000 new units. The population of New York City is very much larger than Honolulu’s, but we are looking at so few units planned that it is hard to see how that would make a dent in the demand here.

Yes, housing is the other side of the minimum wage issue, as Appleseed’s tweets have pointed out.

A permanent solution is needed

Steadily increasing homelessness in Honolulu is only the tip of the poverty iceberg. Check the tweets above. If wages are low and housing costs are high, then there’s trouble.

Oblivious to this, the city adopts punitive measures, clearing the streets by criminalizing homelessness. Out of sight, out of mind (again, where is the uprising?).

The state established the HCDA, and as a 2014 article on the web notes:

Part of HCDA's rule for affordable housing says 20 percent of high-rise condominium units developed in Kakaako must be affordable to residents earning no more than 140 percent of the annual median income in Honolulu, which equates to about $94,000 for a single person or $134,000 for a family of four.
…
The 988 Halekauwila tower was approved with 424 condo units, of which 375 were going to qualify as affordable housing.
…
Under HCDA rules, an affordable housing condo cannot be resold within 10 years without a penalty, but after that a buyer may sell his unit at the market price.

More recently, Hughes proposed 15 years. That’s not much improvement. It’s a small space of time. We need that housing to stay affordable. 15 or even 30 years is not enough, it just kicks the can down the road.

Of course, if our government (city or state) is interested (question: are they really?) in increasing the quantity of low-cost housing, does allowing low-cost housing to leave the pool make any sense at all?

There’s no problem with housing for millionaires. Take Kakaako for a moment. HCDA and everyone else seems willing to just give it away to the well-off class. Hey—Foodland closed in Ala Moana, but they still have Whole Foods. That fits the plan. $3.7 million condos—piece of cake. Or maybe brioche. They will have their Zabars, Dean & Deluca and their cheese shops, not to worry.

A building is a machine for turning land into money, and so, left unchecked, Kakaako will sprout any number of these machines, each grinding out huge profits for the landowners.

Where do the rest of us fit in? We don’t. We have no part in this at all.

Unless we take a role in planning and lay down the rules. Those condo/machines could be either supplying or funding affordable housing elsewhere on the island as well as in Kakaako.

But no one will give us a gift of affordable housing.

If we want a say in what the future will look like, we need to get busy.

Almost always left out of the discussion is the ongoing failure to provide homesteads to Native Hawaiians under a trust obligation that we accepted as a condition of statehood. Beneficiaries are literally dying on waiting lists. The state chooses to litigate (Kalima) endlessly rather than fulfill its trust obligation, which it is breaching in continuity. The housing gap in this case is again closely related to the income profile. A living wage would help, but does not relieve the state of its obligation to Native Hawaiians. Fulfilling that obligation would expand the housing pool as well.

How many letters or emails does Governor Ige receive each week asking him to close out the litigation and begin providing homesteads? Probably zero.

Low cost housing? Housing for Native Hawaiians under the trust? We are just not into any of it. And the silence from the general public is disheartening.

I would hope, in closing, that at least the advocates for low-cost housing would be inclusive and stand equally for those owed homesteads under the trust. That we always omit Native Hawaiians both from the discussion and from the proposed solutions is inexcusable.

Comment originally posted to The increase of Hawaii’s minimum wage to $10.10 leaves us behind even if it were to take effect today by Bart Dame:

I was fortunate to have worked within the coalition that helped pass this law. I can assure folks that not one of the advocates working on this felt that $10.10 was adequate, nor were we happy with the slow phase-in of the hike. As I have said before, absent a mobilized social movement, the advocates were able to win this and only this much, taking advantage of an election season where both the President of the Senate (Donna Kim) and the Chair of Ways and Means (David Ige) were running for higher office in tough races and could not afford to be seen as opposing a hike in the minimum wage.

Those who think we could have attained a higher wage without having an aroused public to back us up, are living in an illusion. So how do we draft behind the national call for a $15 an hour minimum wage? Much of the research and argumentation (or 'talking points") developed by the advocates for our local legislative push can be put to use for a $15 wage hike. The Hawaii Appleseed site, in particular, has resources we can readily employ.

There are many myths, even lies, which are commonly accepted by much of the public, seen as "common sense economics." But, in reality, are rightwing, anti-worker talking points which adhere to conservative "economic" ideology, but are demonstrably false in real world economics.

A hike in the minimum wage does NOT lead to a net hike in unemployment. Nor does it lead to a drop in economic growth. John Maynard Keynes may have died a few decades ago, but his basic understanding of economics can not be set aside in favor of rightwing Austrian economists promoting 19th century laissez-faire policies designed to help the rich get richer. Well, actually, they can, if the Koch brothers and other filthy rich plutocrats endow think tanks and university chairs to promote the economic equivalent of climate change denialism.