The increase of Hawaii’s minimum wage to $10.10 leaves us behind even if it were to take effect today

In yesterday’s article on Hawaii and the minimum wage, The fight for a living wage that Hawaii ought to join (5/19/2015), I was primarily focused on the lack of news coverage of nationwide efforts to increase the minimum wage to $15 (or even to a living wage of $25). The news vacuum must inevitably contribute to Hawaii being left behind (again).

Without information and given our politically disengaged populace, the fight for this and other socially necessary reforms is left to advocates.

Dedicated though they may be, public support is still crucial to success.

Although not covered in the news, there is data out there that could possibly stir up some action—if it could be disseminated widely.

For example, in testimony on SB2609 (2014) which ultimately became the law increasing the minimum wage in increments, Dwight Takamine, Director of the Department of Labor and Industrial Relations, submitted testimony that contained useful comparative data. For example, this:

Historically, the federal minimum wage was higher than $7.25 an hour in 2013 dollars for most of the last 60 years. 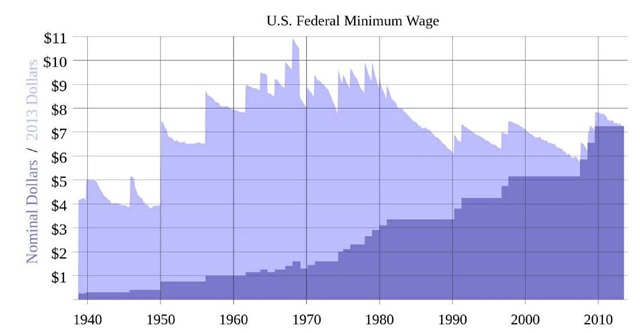 From this and other data, it’s clear that setting the minimum wage at $10.10 in 2018 is way behind what’s necessary. Yet reporting was generally supportive of the bill, and of course it is something. 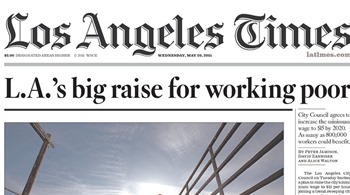 The testimony on SB2609 is worth reading (see the right side of this page).

Just doing something is not enough

So while celebrating an increase in the minimum wage, the fact that it is insufficient to alleviate poverty in Hawaii should still be noted. Too often, I think, we let government off the hook when it (often belatedly) does take some kind of action but that action is not sufficient in view of the problem. Sure, we can be thankful that $10.10 in 2018 passed. But that’s not good enough.

Google for the news and you’ll see that there has been a large and prolonged push for a $15 minimum wage, unionization of fast-food workers, and for other labor reforms around the country. Given the high cost of living in Hawaii, we could conceivably re-open the issue of a fair minimum wage for the state, or even on a county level.

Posted a link to your commentary on my FB page, along with this comment:


I was fortunate to have worked within the coalition that helped pass this law. I can assure folks that not one of the advocates working on this felt that $10.10 was adequate, nor were we happy with the slow phase-in of the hike. As I have said before, absent a mobilized social movement, the advocates were able to win this and only this much, taking advantage of an election season where both the President of the Senate (Donna Kim) and the Chair of Ways and Means (David Ige) were running for higher office in tough races and could not afford to be seen as opposing a hike in the minimum wage.

Those who think we could have attained a higher wage without having an aroused public to back us up, are living in an illusion. So how do we draft behind the national call for a $15 an hour minimum wage? Much of the research and argumentation (or 'talking points") developed by the advocates for our local legislative push can be put to use for a $15 wage hike. The Hawaii Appleseed site, in particular, has resources we can readily employ.

There are many myths, even lies, which are commonly accepted by much of the public, seen as "common sense economics." But, in reality, are rightwing, anti-worker talking points which adhere to conservative "economic" ideology, but are demonstrably false in real world economics.

A hike in the minimum wage does NOT lead to a net hike in unemployment. Nor does it lead to a drop in economic growth. John Maynard Keynes may have died a few decades ago, but his basic understanding of economics can not be set aside in favor of rightwing Austrian economists promoting 19th century laissez-faire policies designed to help the rich get richer. Well, actually, they can, if the Koch brothers and other filthy rich plutocrats endow think tanks and university chairs to promote the economic equivalent of climate change denialism.