“
Abercrombie described the Kakaako proposal as "comprehensive," not "universal." But, he said the settlement would well exceed $200 million because the land — described by the governor as "prime" — would grow exponentially in value.--State Offers OHA $200M Kakaako Land Settlement (Civil Beat, 11/16/2011)
”

A rally has been called tomorrow (Wednesday, 4/8_ 11:00 a.m. -2:00 p.m. at the State Capitol by the Friends of Kewalos, to protest legislation that, if passed, will permit residential development in Kakaako Makai).

Checking through news coverage of the transfer of state land to the Office of Hawaiian Affairs (which, it should be noted, is itself part of the state government), the valuation of around $200 million dollars for the land was seldom challenged. The value of the land is key—the transfer was supposed to wipe out debt that the state has owed OHA.

It looks like OHA (and hence its Native Hawaiian beneficiaries) has been cheated. Even besides that, it looks like the transfer is being used to shove residential developments on Kakaako Makai down all of our throats.

Although the state is obligated to pay OHA revenue that is generated from ceded lands, it has not done so. Side comment: It hasn’t put Native Hawaiians on their homelands, either.

So this deal was supposed to settle it. More recent news reveals that the value of the land, in the absence of residential development which is currently not allowed, would be closer to $50 million.  If so, OHA has been cheated of $150 million. Wait a moment—OHA knew this, so can one really say they were “cheated?” OHA’s appraisal of the land deal, done by Medusky & Co., Inc. acknowledged that residential uses of that land are not permitted.

The claim that the transferred land  is prime and “would grow exponentially in value” appears to have been an inexcusable lie.

But is even $50 million a fair price for land that would need extensive reclamation and in any case is threatened by sea rise due to climate change? 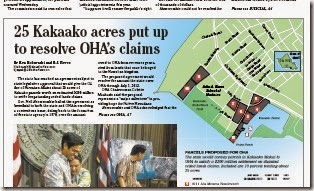 As explained in OHA’s idea for residential construction in the tsunami inundation zone is, well, all wet (1/30/2014), the pink area in the map above right is the evacuation zone, the inundation zone hugs the water a bit more. Also, the area will be pounded by storm waves and suffer groundwater infiltration long before climate change reclaims it for the sea.

So perhaps OHA allowed itself to be cheated of the whole $200 million.

Now, as you can tell, I personally feel that residential development in this area was, and still is, foolhardy. Kakaako Makai should be preserved for the use of all residents, not turned over to rich sunbird condo dwellers. That’s what 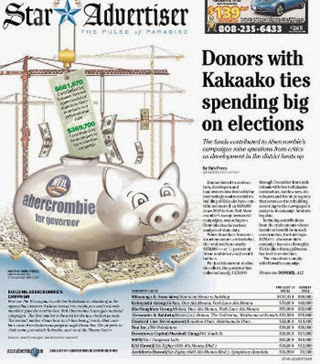 would need to happen to squeeze the most value from the land, and don’t think that our state government, owned as it is by developers and their friends, would hesitate one moment, if allowed, to overdevelop Kakaako any way it can.

The Star-Advertiser did a good job of exposing Governor Abercrombie’s campaign contributions related to Kakaako development in their front-page story on March 30, 2014.

But by holding such a personal view, am I saying that I do not believe Native Hawaiians should be allowed to realize full value from the land they have been “given?” That’s part of the dilemma the “$200 million” OHA deal presents. And no doubt, it will be part of the pressure applied to state legislators to approve residential construction in Kakaako Makai.

It’s not for me (or anyone) to suggest what is best for Native Hawaiians. But somehow, creating contention between the valid claims owed by a delinquent state government and the many who oppose this use of the land, and which specifically benefits the greedy development lobby, is also not right.

If the state owes $200 million, it should make arrangements to pay it, not pull tricks on anyone, and certainly not create yet another level of oppression in the “aloha state.”

Good job on this, Larry. I've been writing elsewhere about the insanity of building anything in Kaka'ako, Ala Moana, lower Mo'ili'ili and Waikiki because of groundwater rise. It is immoral.and criminal to put up structures there that will stand for hundreds of years which are not built from the beginning to address all of the problems they will start to face in the next fifty years. People at that time won't be able to pay for the huge costs of raising the ground level in so many needed places. Hawaii will become a swamp with empty shells of high rises standing in the murky water.


At least, they might design the parking spaces to be convertible later into boat slips...


Larry, thanks for articulating my concerns about this whole fiasco. Why did either the State OR OHA agree to this in the first place. Knowing that building in that location was both against our laws AND commonsense. Yet many supported that trade. Were they back door promises that the laws would be changed? Was their ignorance of the rising sea levels at the highest levels of government & OHA? The whole deal was an outrage when it occurred, and is an outrage now. I say, no more waivers in Kakaako. Let the chips fall where they may.

That deal was a low point in the ongoing saga of State of Hawaiʻi, OHA, land, and debts owed to kanaka maoli.