OHA’s idea for residential construction in the tsunami inundation zone is, well, all wet 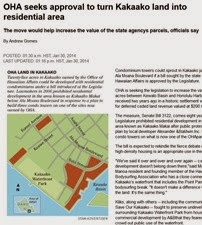 Today’s Star-Advertiser reports that a bill currently alive in the Legislature, SB3122 would permit the Office of Hawaiian Affairs (OHA) to build residential condominium towers on their land in Kakaako Makai. The bill is not yet assigned to an agenda for a hearing. 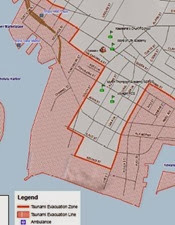 ←What’s wrong with this picture?

The image to the right is snipped from the Oahu tsunami evacuation map. Sometimes the pink area is mislabeled as the tsunami inundation zone, but that would be narrower, hugging the water a bit more.

So OHA wants to put homes in what is guaranteed to be under water due to climate change? The only question is when residents will need to paddle to work. The floods are coming, we just don’t know how soon.

At first, the lobby will be flooded when storm surges occur at high tide. They might choose to build a wall of some kind to protect the property. But over time, the ground water on the peninsula will also rise, and walls won’t keep that out.

Chip Fletcher, a geologist in UH’s Geology and Geophysics Department, has done mapping that uses a blue line to show land vulnerable to the three-foot sea level rise expected by the end of the century. In response to an email query, he replied, “I don’t see a dramatic risk in the Kakaako area–but tsunami and high wave overwash and the possibilities of higher than expected sea level rise all suggest that any development there should take marine hazards into account in the building design, etc.”

Fletcher gives more detail on his department’s website detailing the anticipated effects of sea level rise, including sea water coming out of storm drains along Ala Moana Boulevard when tides are high.

Since that article was published, calculations have been revised. Sea level rise is moving faster than originally thought. China, the US and other countries continue to pump pollution into the atmosphere as though there were no tomorrow. As a result, indeed there may be no tomorrow. At some point, climate change may become irreversible and accelerate.

There’s another thing wrong with this picture. OHA is a state agency that made a deal with the state to settle a massive controversy over money owed to the Native Hawaiian people. Does a state agency have a right to do that in the first place?

The Office of Hawaiian Affairs (OHA) has been fighting for decades to get some $200 million in back-due revenues in return for the state’s use of so-called “ceded” public lands that were seized from the Hawaiian kingdom upon the overthrow of Queen Liliuokalani in 1893.

But the deal was done, approved by the Legislature and lauded by Governor Abercrombie, whose baby it was. As the Weekly article notes, however, it’s possible that the true value of the land might be closer to $50 million rather than $200 million, and the land transferred to OHA is very sub-standard besides.