Legislature should clean up its act before censuring Rep. Hanohano


“
I was taught to see racism only in individual acts of meanness, not in invisible systems conferring dominance on my group.--White Privilege: Unpacking the Invisible Knapsack, by Peggy McIntosh
”

Except for the unfortunate title, the article posted today by Civil Beat reporter Chad Blair (Chad Blair: How Do You Solve a Problem Like Hanohano?, Civil Beat, 3/3/2014) is an excellent summary of the situation now facing the Hawaii House of Representatives. No person is a “problem,” Chad.

Between the lines is the real story though: the House has chosen to do nothing, so far. What should House leadership do, if anything, in response to media coverage of remarks by Rep. Hanohano?

Perhaps the leadership and other representatives have more sensitivity than the media have shown to this and other issues related to Native Hawaiians in what used to be their own country. Perhaps they also understand that selective enforcement of legislative rules is discriminatory.

Certainly, Rep. Hanohano could have expressed herself differently. I am not arguing to excuse her words, nor was I personally present when she spoke them. But I do want to say that the House of Representatives has a lot of enforcing it might do before getting around to this situation. A lot. 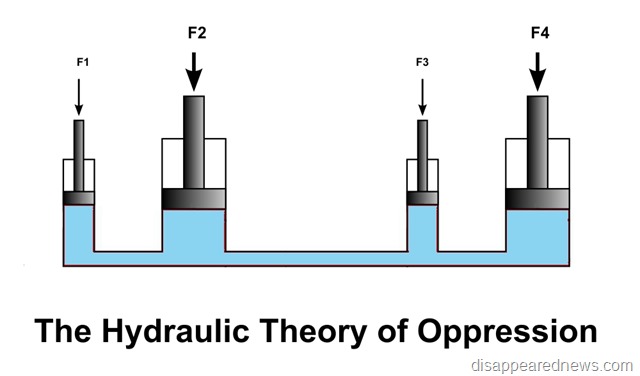 First, please read Murals and the hydraulic theory of oppression (9/18/13). This article was intended to bring some of the discussions of the 1980’s and 1990’s into 2014 Hawaii. Oppression, and its effects, are nothing new in either the academic or popular literature, but we seem to be in denial that anything like that applies here in the “aloha” state.

Perhaps state legislators, though, do understand a thing or two.

Next, gaze upon the front pages of yesterday’s and today’s Star-Advertiser: 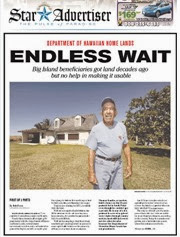 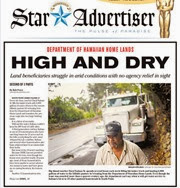 Nearly three decades after signing 99-year leases with the Department of Hawaiian Home Lands, several dozen homesteaders in this arid and isolated region of the Big Island still are waiting for the agency to deliver the one thing critical to their ranching and farming lots: water.

They're also waiting for DHHL to subdivide the land.

Without a completed subdivision, the 36 homesteaders do not have tax map keys showing the precise boundaries for their leasehold lots.

Without tax map keys, they have been unable to get county permits or general financing to build homes on the property, although a few have done so anyway.

Note that the state has failed its obligations for “nearly three decades after signing 99-year leases.”

Big Island rancher Daryl Kaluau Sr. spends several hours each week filling his tanker truck and hauling 6,000 gallons of water to the hillside pasture he’s leasing from the Department of Hawaiian Home Lands. Even though the lease was awarded more than a quarter-century ago, the department can’t say when it will get water service to Kaluau’s lot or to 23 other pastoral homesteads in South Point.

Don’t miss the “quarter-century ago” part. It’s key to understanding that the State of Hawaii continues to deny state and federal obligations to Native Hawaiians on an ongoing basis even up to today.

These and other failures were front and center in the The Kalima v. State of Hawaii class action case that was filed in 1999 in Circuit Court. I wrote about the case in Hawaiian Homestead case scheduled to resume Friday in Circuit Court (8/30/2012). It was filed by public interest attorneys Thomas Grande and Carl M. Varady and argued all the way to the state Supreme Court and back. From the attorneys’ web page:

The trial for the liability portion of Subclass 1, Waiting List, started on August 4, 2009.  The trial ended on September 11, 2009.  Approximately three weeks later, on November 3, 2009, Judge Eden Hifo rendered her written decision and ruled that the State of Hawaii breached its trust obligations and was liable for the delays in receiving homesteads by the beneficiaries. …

Despite the decision in 2009, the case is still being argued—the state is doing anything in its power to avoid settling for damages. The newspapers largely ignored the case. Even in the Star-Advertiser’s excellent series on the problems with the Department of Hawaiian Homelands, there was no mention of the case. I did email the reporter, and some time later the paper ran a separate series on the Kalima trial. The trial exposed the stories of beneficiaries who waited decades to receive their land—in many, many cases, they were to old at that point to farm, or retired and so could not qualify to build a home on their lot. And many of the lots were unsuitable to have been given to beneficiaries in the first place, or they were not allowed to get to “their” land.

Irene Cordeiro-Vierra applied in 1984 and lived on the beach for much of her wait.

"Now I am 82 years old, I get letters from Hawaiian Homestead now saying I have homes you can apply for, I am not capable anymore," said Cordeiro-Vierra.

The points I would like to take away from Kalima are that not only is the oppression continuing, but the state legislature has not taken action to fix the problems. The waiting lists continue, people die before receiving their land, and when they get something, it is often no good, as these recent articles demonstrate.

The responsibility to fulfill trust obligations to Native Hawaiians was accepted at the time of statehood, and cannot be simply dismissed.

Returning for a moment to Unpacking the Invisible Knapsack, the paper from which the opening pull-quote was taken,  it’s a question of privilege to be able to ignore the customs and experiences of those of a different race or culture.

In order to explain that last point, though, I think I need to set some background to start with. Bear with me. Background is in the sidebar on the right.


So my point is? Go back to the hydraulic theory. When someone speaks up, we are anxious to plug the leak, stop the noise, get back to forgetting that we are continuing to apply the pressure, the ongoing oppression.

At the same time, if the Legislature enforces its rules (which it is happy to break on a regular basis each session) against Rep. Hanohano, it might first explain why it has not enforced its rules against, for example, legislators who break the law by filing incorrect, incomplete or false reports.

The House has so far also not taken action against Rep.Tom Brower, whose violent tactics targeting the property of homeless persons in Waikiki. And if he “rousted” them from bus stops while carrying his sledgehammer, though I’m no legal expert, I wonder if that might fit the definition of assault. Brower embarrassed Hawaii nationally and internationally, but the House has remained silent.

So long story short, I have no doubt that Rep. Hanohano could have chosen other words, but as far as enforcing its rules against her, if the House did so it would itself be an embarrassment to the State of Hawaii since the Legislature has ignored far greater infractions of its rules and decorum.

The chief clerks in the House and Senate told me last week that they could not recall any incident in recent memory in which a representative or senator was forcibly removed from a committee, censured or expelled.

So how would it look if the only action the House takes “in recent memory” is against a Native Hawaiian, given that it chooses to ignore far greater infractions on the part of other legislators?

How then do you respond to those who say that the "J" word to those of Japanese ancestry is every bit as offensive as the "N" word? I think we could agree that a legislator calling African-American people "N's" would face truly scathing criticism and cries for stern action.


Rep. Hanohano communicated very badly. I'm not trying to excuse her choice of language. She's getting the scathing criticism. The issue is, what should be done about it? She hasn't broken laws, other legislators have, and the Legislature took no action against them. Words are only words, not deeds. By all accounts in the media, she has otherwise performed her role as a lawmaker well, and has represented her constituents (actual people, rather than corporations or lobbyists) well.


The inept government performance is not a flaw, or a mistake in the State/local government of Hawaii. It is the desired feature. Appearance of addressing of problem while not.


Writing as a local of Japanese ancestry, I understand that some might find the language Rep. Hanohano used offensive. I wouldn't like to encourage its everyday use, nor do I think she uses that language on an everyday basis. When facing the cultural imperialism embedded in our system of government and the flood of Western perspective invading Hawaii for far too long, it is far more offensive to ignore the genocide of the Hawaiian culture than it is to use the "J" word. Who are we to legislate the Hawaiian relationship to sharks especially when we allow the US Navy to bombard all ocean life with sonar and to use the ocean as dumping grounds for obsolete or hazardous weaponry?

If only there were a forum for discussing the ongoing oppression, even genocide, taking place here. The newspaper never gets near it, nor does TV or public radio.