Murals and the hydraulic theory of oppression

The Monday Star-Advertiser described a dispute over a mural hanging in the state Convention Center that has been covered over in response to a complaint. The mural had been on display for 16 years.

The 10-by-25-foot mural pre­sents a panorama of the island chain fashioned from concrete, plaster and bronze, and was designed to reflect the artist’s concern that Hawaii’s people are losing touch with important traditions of their past. The sculptor dubbed it “Forgotten Inheritance.”

Today a heavy black cloth obscures the artwork from public view. The curtain came down on the night of Sept. 4, at the direction of Hawaii Tourism Authority President Mike McCartney after Paulette Kaa­no­hi­oka­lani Kalei­kini and other Hawaiians said they were offended by the depiction of bones in the sand at the edge of the mural.

Kaleikini has led efforts to protect Hawaiian remains from disturbance by construction work, as a plaintiff in lawsuits filed by the Native Hawaiian Legal Corp.

Besides the expected trolls who thrive on the S-A website, there has been discussion on the lawsuit and the covering of the mural that seems to range all over the place.

I’m not going to engage that discussion, but it occurred to me that this is an opportunity to hit the drawing board and revive my “Hydraulic theory of oppression.”

Honestly, I can’t remember if this is originally mine or not, it has been too, too many years since I have used it at workshops on the Mainland (curious that we don’t discuss oppression and human rights as much in public seminars here in Hawaii as they did in California or Oregon, for example).

This is a general model, not related specifically to the current mural controversy or to the situation of any specific people. I think it has a certain general applicability.

If you take any group of people (the hydraulic fluid in the diagrams below) and apply pressure in a number of ways, the pressure in the fluid will build up. It’s always there. So here we have four pistons, of different sizes, applying pressures of different force. The forces are labeled F1, F2, F3, and F4. There could, of course, be many more. The amount of pressure applied to each piston probably varies from time to time, this is a dynamic model. The point is that the hydraulic fluid is constantly under pressure. 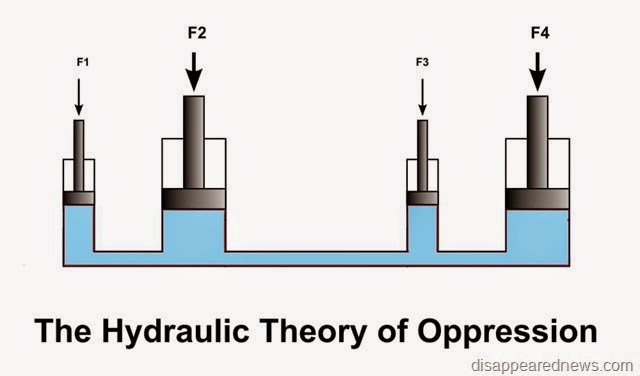 In Hawaii, it’s easy to think of what pressures are constantly felt by Native Hawaiians that may not be felt by others. The F1, F2, F3, F4 and more might be economic marginalization, the illegal overthrow of the Kingdom, suppression of language and culture, and the constant desecration of the Iwi Kupuna. If you stop and think for a moment, there are more that can be added to the list.

Now, pipes under pressure for some time can hold up, or they can leak. 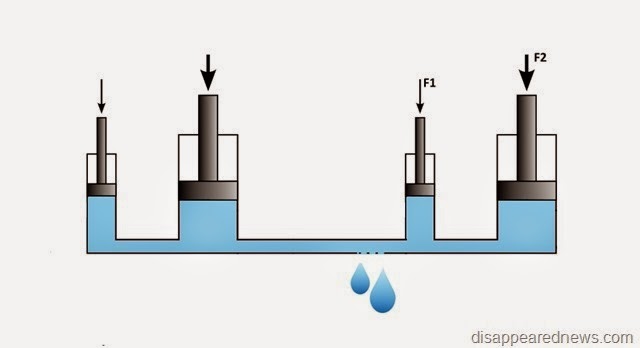 If the drops look like teardrops to you, that’s probably what they are. Often these tears are not noticed. They don’t seem to bother anyone. They never make the news. That’s not to say they’re not real.

Sometimes, for reasons we cannot exactly explain, and at times that we can’t predict, a leak that does make the news occurs. 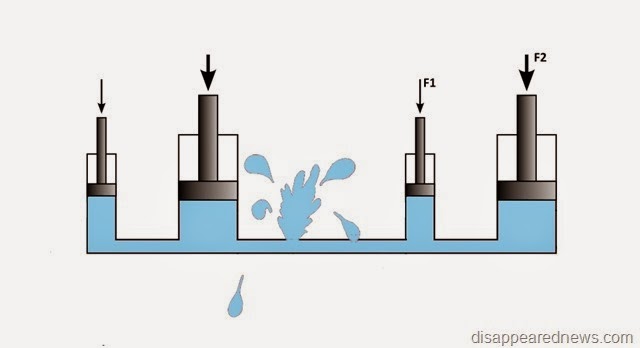 Often those not under pressure wonder why the pipes burst. They don’t understand. They may blame an individual, or even label that individual “racist.”

It’s not necessary to explain in detail why these big leaks occur. That’s the hydraulic theory. They happen because of the unrelenting pressure from a variety of sources. With constant pressure, or maybe there’s some new or increased source, something is likely to give sometime.

Although the pressure that an oppressed people may feel is real, it may be invisible to others. They don’t know about the oppression, and so are surprised when something bursts out. Being able to ignore, or not know about, the oppression of others is a privilege, often described as “white privilege.”

And so there is criticism and condemnation, but not much understanding.

The Internet has brought with it an army of “trolls,” but even outside of newspaper comment sections, opinions are usually all over the map, and often unkind.

‘Way back in the ‘80s, racism, oppression, domestic violence, and related concepts such as white privilege were more often discussed in community settings (that is, outside of sociology or psychology courses in universities), it seems. A classic reference is Unpacking the Invisible Knapsack by Peggy McIntosh, dating from 1989 or so. It has nothing to do with murals, but remember, I’m speaking generally.

There is white privilege, and there is male privilege. It’s all a fabric, all related. When something breaks into the news, how often do editors dig deeper than the shallow facts of who-what-when-where? No, even when they are handed oppression or racial discrimination on a platter, they usually do not draw any connection. As an example, Republican state legislators have a clear objective of suppressing minority voting rights, a blatant example of discrimination. That they can still get away with it in 2013 is significant, but the fact that the perpetrators are not constantly called in the media on their racism is also significant.

There is great inequality in this country even today. Oppression is still the name of the game in many states. It’s connected with a persistent and pervasive racism.

Sometimes I wonder if the many workshops and all the trainings of the 1980s and 1990s were for naught.

As I said, it’s possible that the “hydraulic theory” is not originally mine. I attended many workshops years ago and co-lead a men's group. Perhaps someone else originated this model. I’ve found it useful, though, and thought I should set it down for whatever it is worth.