Financial disclosures the Ethics Commission should have caught—crowdsourcing disclosure

What shall we do about financial disclosure forms that fail to disclose? There ought to be a law… actually, there is a law, but perhaps the state legislators highlighted below are not taking it seriously enough.

Note that Ian reviewed the reports and discovered the problem, not the Ethics Commission. Yes, they are working to improve their internal process. But where are we now?

The Ethics Commission posts financial disclosure forms on their website here. If a form has been filed, you should be able to see it yourself.

So I’m going to suggest a new form of entertainment, suitable for concerned citizens of all ages. How about we “crowdsource” the inspection of these documents, and then hold public officials accountable for errors or deliberate falsification?

Sadly, it looks like no one else will do that for us.

Trying the crowdsourcing approach—what can we find?

Let’s take a peek. Here are some forms that you might have found on a dull weekend when nothing good was on TV and so you turned to the Ethics Commission website in search of entertainment.

I’ll highlight just three, and inspect one in detail. In alphabetic order:

On Senator Donavan Dela Cruz’s May 19, 2011 filing he simply checked the box indicating no changes to report since last filing.  But his last filing was 12/9/10 which showed him as a Councilmember. Oops!

Let’s look at one of these as an example.

Grab a copy of Rep. Rida T.R. Cabanilla Arakawa’s 2012 financial disclosure from the Ethics Commission web page here. According to the signature block at the bottom of the page, which you can see on the original as filed with the Ethics Commission, it was signed on January 3, 2012:

The text above the signature is pretty clear and hard to miss. It says:

Ok, let’s look at the top of the form now. This is where disclosures are made. 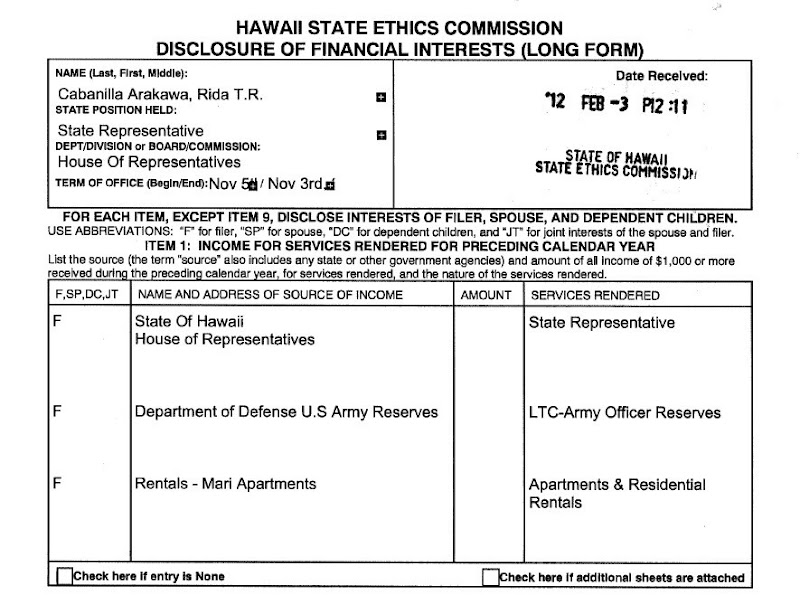 It’s easy to see that there is nothing entered in the “amount” column.

Does “disclosure” and “transparency” mean only that the form must be sent in, but not that anyone will look at it? What about those statutory penalties?

Despite the “statutory penalties,” Senate President Shan Tsutsui declined to take action against this “politically powerful state senator” under Senate Rule 72, and the Ethics Commission declined to levy any fine whatsoever.

Combined, these two inactions send a clear message to state officials. It also might make us wonder about the effectiveness of the sanctions supposedly in place in Hawaii’s ethics law.

So where does this leave the Ethics Commission? Not having fined Hee, will there be any action against others who file false reports?  If not, doesn’t that demonstrate that it’s ok to file false reports? Doesn’t this say to pubic officials that nothing will happen except that a report might appear in some blog one day? Big deal.

Which path will they take?

We might also question the concept of “transparency” if there is no action taken when public officials make a mistake or file false reports.

Sure, the financial statements were posted on the web. We have our “transparency.” In the absence of review and the application of penalties, is “transparency” all that we want, or something more?

Here are just a few reasons you might want to check through the financial disclosures yourself:

Well, if you do find anything, please don’t keep it a secret.