No U.S. government or international agency is monitoring the spread of Fukishima radiation—we’ll have to do it ourselves


“
No U.S. government or international agency is monitoring the spread of low levels of radiation from Fukushima along the West Coast of North America and around the Hawaiian Islands.--The Woods Hole Oceanographic Institution, 1/28/2014
”

It’s getting harder for concerned citizens to know what to be concerned about most these days.

Whether it’s BPA (or worse) in our sippy cups or Fukushima radioactivity in our ocean water, it’s frustrating to know that vital information is being withheld from us by corporations and by our governments. You can find out more about chemicals in plastic containers at the link just above, but ocean water radiation reports seem to be more elusive.

A new project seeks to fill the gap by crowdsourcing testing of ocean water. We can gather information that we’re not getting from government sources ourselves.

How you can become an ocean water radiation monitor

You can propose a site, begin fundraising, and ultimately submit samples for testing. Or you can contribute to an existing site so that they can complete testing. Click on the image and get involved.

Taking radiation monitoring into our own hands 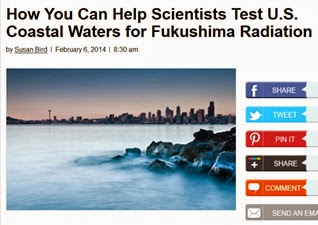 With plumes of radiation-laden ocean water predicted to move from offshore of Fukushima, Japan across the Pacific and first to the US West Coast and then to Hawaii, you’d think that there would be monitoring of ocean waters here. The Department of Health claims they are monitoring, but the details seem obscure and hidden.

The question then remains: 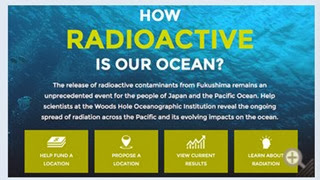 How radioactive is our ocean? More important, as Fukushima water arrives at our shores, how radioactive will it be, and should we be concerned also about the sea creatures that come with it?

The Woods Hole Oceanographic Institution has created a program to harness the social power of the Internet to monitor ocean water.

I asked WHOI about their program last month. In particular, I was wondering who would be doing the monitoring in Hawaii. I was hoping to interview the volunteer monitors for an article.

The way it works is that WHOI and its web pages support volunteers around the country, each of whom must raise funds for the ocean water testing. The volunteers have the option of remaining anonymous, and although WHOI passed on my request for an interview, the Hawaii volunteers have chosen to remain anonymous. All I know is that on Oahu they are from the University of Hawaii and have monitored once at Kaneohe Bay. Their fundraising page is here, and as you see, they have reached their goal and posted one test result.

Here’s how it works, from a WHOI email:

The money being raised funds the collection and analysis of a seawater sample, which costs between $550 and $600, depending upon location. Once the full amount is raised, the individual will receive a sampling kit to collect 20 liters (about five gallons) of seawater to be shipped back to the Center for Marine and Environmental Radioactivity lab at Woods Hole Oceanographic Institution for analysis. The results from those analyses will be posted on an evolving map online, where you can see cesium concentrations and links to information about radioactivity in the ocean and what the levels tell us.

Another volunteer, on the Big Island, has not yet raised enough funding to begin testing (go here to help out).

WHOI also confirmed to me that at this time they are not monitoring fish or seafood.

Who knows where Fukushima water will touch down first? Here is a link to animated plume predictions. Hawaii will be enveloped by the plume by April, 2016 if not sooner, according to the animation. 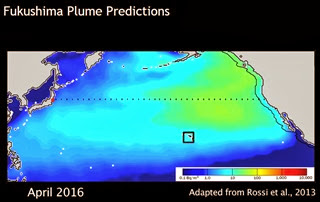 Arguably, government silence is nothing new. Tobacco is perhaps the best example of the sacrifice of public health for corporate profit, and our own government didn’t hesitate to test or use nuclear weapons. One way or the other, it looks like citizens still need to take the initiative to protect our lives and health whether from harmful chemicals or from radiation.

For almost three years, a question has nagged at people living near the coastline in Alaska, British Columbia, Hawaii and along the U.S. West Coast. Is a plume of radioactive ocean water really inching its way toward us from Japan? By all accounts, yes it is.

[care2.com, How You Can Help Scientists Test U.S. Coastal Waters for Fukushima Radiation, 2/6/2014]

Is our federal government protecting us? What about the state? A bill just passed out of the Hawaii Senate to monitor radiation levels in the future (see below) received overwhelming popular and legislative support, moving forward despite state government objections.

Is the Hawaii Department of Health actively protecting us by monitoring ocean water that may contain Fukushima radiation? It’s hard to tell if they are.

The DOH home web page says nothing about radiation monitoring at all. But aha, there is a search box. typing in “radiation” brings up a few hits, mostly about response to radiation emergencies. But there is this:

It’s dated August 14, 2013, but might as well click and take a look. Clicking on the link takes one not to a radiation report, but to a missing report on “south-beach-diet-protein-smoothie-mango.” 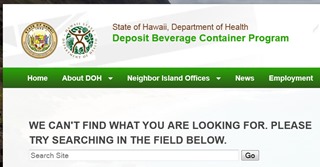 In a KITV story, the DOH response to a senator’s question on the age and visibility of its reports was “duly noted.” Noted, perhaps, but it’s now a month later and it’s not fixed.

So much for DOH commitment to radiation monitoring.

SB3049 passed third reading and was submitted to the House this morning. The SD1 states, in part:

The department of health shall implement a radiation monitoring pilot project that shall:

(1)  Measure and monitor radiation levels in items such as food, dairy products, rainwater, aquifers, and drainage ditches that may be susceptible to increased radiation levels due to the March 11, 2011, Fukushima nuclear disaster; and

(2)  Post periodic reports on the department's website of those radiation levels and their significance to the State.

Individual testimony submitted to the committees on this bill was universally in support—with the notable exception of the Department of Health. Some of the testimony called for even more extensive testing, for example, of depleted uranium radiation. People do seem concerned about the lack of monitoring in Hawaii.

The Department of Health submitted late testimony in opposition. In their testimony, they stated that they are on top of things already.

This bill is unnecessary because the Department has already implemented additional radiation monitoring since March 11, 2011.

Fiscal Implications: Implementation of this measure may require additional funding for sampling and laboratory analysis at a cost of approximately $1000.00 per sample
…
The Department has already established enhanced radiation surveillance around the islands in response to the Fukushima nuclear event. This includes continuous air sampling through the U.S. Environmental Protection Agency’s (EPA) Radnet system located in Honolulu; monthly (or as rain capture permits) precipitation sampling; quarterly milk and drinking water sampling; quarterly shoreline surveillance on the Islands of Hawaii, Kauai, Maui and Oahu; and surveying of Japan Tsunami Marine Debris (JTMD), as needed.

Trace amounts of radioactive material were detected in air, milk and precipitation samples for a few weeks following the Fukushima event, but were far below levels of public health concern. Levels have long since returned to normal values associated with background radiation. Reports of findings and advisories have been periodically posted to the Department’s website since March 14, 2011, along with links for additional resources from various agencies.

So the DOH is monitoring? What tests are they performing, and according to what procedures?

As to links, DOH refers to the federal government’s RadNet data. At least the feds have a web page. Data is for air monitoring. We might be more curious about water around the Hawaiian islands since the Fukushima reactors continue to dump radioactivity into the ocean.

So who will monitor ocean water? Scientists have said that any radiation will be too dilute to be harmful, but yet there is controversy. If no radiation shows up, great! But who is watching?

We’ll have to do it ourselves.

See the sidebar for information on the Woods Hole Oceanographic Institute program that proposes to  crowdsource ocean water monitoring. You can become a monitor. Check it out.

Ha-ha.. Which reminds me... Re: nuclear testing in Nevada -

Reported in "The Enemy Within" (1996) by Jay Gould, "The Nevada down winders' suits were unsuccessful. Despite winning their case in the lower courts, the Appellate Court ruled in favor of the Atomic Energy Commission on the grounds that the US government could not be held responsible. At one point, one of the lawyers for the plaintiffs sent a series of interrogatories to the AEC defense counsel with the following simple question: Who has the responsibility for the safety and welfare of persons and their property near areas of possible fallout? The AEC answered as follows: "It is the responsibility of the heads of families and owners of property to protect their families and their property from possible radioactive fallout."


I've been doing just this for about a year now, check out www.facebook.com/fukushimaandhawaii.

Perhaps you could get the cost of lab testing covered by volunteering at the website and using their fundraising pages.