emptywheel: NSA has been spying on us for more than a decade

I asked the other day, “Will anyone make the NSA stop spying on us?” The answer, of course, is no. They’ll simply weather this crisis as they have done before. 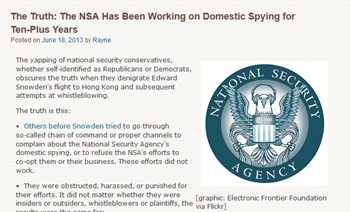 Here’s a snip from an article on the excellent emptywheel blog:

•  Three presidents have either failed to stop it or encouraged it (Yes, including Bill Clinton with regard to ECHELON).

•  The program has been growing in physical size for more than a decade.

[emptywheel, The Truth: The NSA Has Been Working on Domestic Spying for Ten-Plus Years, 6/18/2013]

The same article lists the names of some people who have tried to stop the program by going through channels. Obviously, it didn’t work. Undoubtedly, the path chosen by whistleblower Edward Snowden has proven much more effective.

Check out the blog. If you want a laugh, there’s a short article just before the above snip remarking on how Congress does oversight, with a link to a discussion on Politico.