Will it be times of famine or an age of plenty? IEEE Spectrum thinks the latter 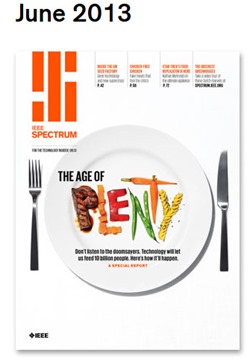 The IEEE Spectrum underwent a transformation some time ago into very much a general-interest technical magazine. In other words, although it still has an engineering slant, you don’t need to have an engineering degree to understand and appreciate most of the articles.

So I wasn’t totally surprised that they did a food issue, although I’ll admit to initially being taken aback by the “Age of Plenty” theme. Heck, isn’t it common wisdom that food famine is on the way for much of the world, as the climate worsens and the population continues to increase?

The mail takes a while to arrive in Hawaii, and my issue just came, so I haven’t digested very much of it. But if you’re interested in food, food security, or food technology, you’ll find that this magazine is on a different tack from others. Have a look—they are also very good about posting their articles on-line. Read them here.