From the report: Forced Labor

Forced labor, sometimes also referred to as labor trafficking, encompasses the range of activities— recruiting, harboring, transporting, providing, or obtaining—involved when a person uses force or physical threats, psychological coercion, abuse of the legal process, deception, or other coercive means to compel someone to work. Once a person’s labor is exploited by such means, the person’s previous consent or effort to obtain employment with the trafficker becomes irrelevant. Migrants are particularly vulnerable to this form of human trafficking, but individuals also may be forced into labor in their own countries. Female victims of forced or bonded labor, especially women and girls in domestic servitude, are often sexually exploited as well.

This year’s report, along with prior reports, fails to note prosecutorial failures in Hawaii cases that had involved potentially hundreds of predominantly Thai and Laotian workers. Had the cases resulted in convictions, there would likely have been restitution sought from alleged traffickers.

The failure to address labor trafficking through the courts has also left related concerns unresolved. Among those are the welfare of allegedly trafficked workers, and the allegations of improper application of agricultural chemicals related to trafficking.

Despite the reports’ favorable comment on Department of Justice task forces and similar efforts, there is no mention of the Hawaii cases and no longer any visible activity to investigate and bring to an end reported agricultural labor trafficking in Hawaii.

In our system of justice, everyone is innocent until proven guilty. No one has been found guilty in the major cases described below.

It’s the job of the courts and federal prosecutors to bring cases as appropriate and to prosecute them competently to protect both the public interest and the allegedly trafficked workers. It’s an open question whether labor trafficking in Hawaii will ever be completely investigated. 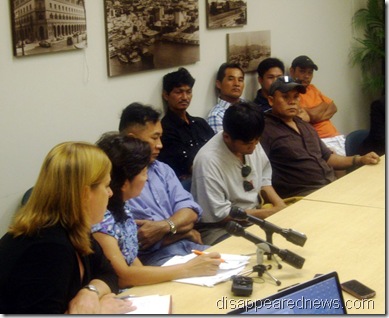 Press conference with Thai workers held on August 11, 2011. On the left is attorney Melissa Vincente, then the interpreter. Off-camera to the right is attorney Clare Hanusz and some workers who did not want to be photographed.

The first high-profile case in Hawaii resulted in charges brought against the owners of Aloun Farms, brothers Alec and Michael Sou. The case involved the alleged forced servitude of 44 Thai farm workers.

The case against the Sous was dismissed in August, 2011, after it was discovered that the lead federal prosecutor in the case had incorrectly instructed a grand jury that it was illegal for recruiters to charge workers recruiting fees to work in Hawaii in 2004. Since the law was only changed in late 2008, the fees were not illegal over the period of time covered in the Aloun case.

As a result of the prosecutorial error, the case was dismissed without concluding a trial. Evidence that prosecutors planned to present was not tested, nor, of course, did the defense have an opportunity to refute the charges. The reported charges originally included economically entrapping the workers, housing them in dirty metal containers, threatening to deport them and making them work for little pay.

Along the way, the Sou brothers had entered a plea agreement in January, 2010 to a single count of conspiracy to commit forced labor involving 24 of the 44 workers, bringing down their maximum federal sentence from 15 years to five years. The brothers also agreed to pay approximately $8,000 per worker in restitution, for a total of $192,000.

But  the agreement was thrown out by Judge Susan Oki Mollway in September that year. The court had meanwhile failed to pay out the restitution checks, and so the money was returned to the Sou brothers.

The case proceeded on a track to trial, leaving a considerable public record—and then was aborted after only a few days when the prosecutor’s error became known.

The next federal failure resulted in the dismissal of what had been billed as the largest human trafficking case in US history:

A federal judge on Friday dismissed human trafficking charges against executives and business associates of a labor recruiting company accused of exploiting hundreds of farmworkers from Thailand by confiscating their passports, putting them into debt and threatening to deport them.

The move came after prosecutors requested the dismissal of the case against two top officials of Global Horizons Inc., the chief executive, Mordechai Orian, and the company’s director of international relations, Pranee Tubchumpol.

Eight people were originally indicted, and three have pleaded guilty.

Again, there is a voluminous public record in the case, including the three guilty pleas, now negated by the withdrawal of the case.

The authorities accused the company, which is based in Los Angeles, of manipulating 600 Thai workers it placed at farms across the United States. It was the federal government’s largest human trafficking case.

After the dismissal of the Aloun Farms case, the federal prosecutorial team in the Global Horizons case was changed.

It became apparent during pre-trial hearings that the team was not able to deal with the mountain of potential evidence in their possession, especially with the large number of hard disks that needed to be scanned and vetted for privileged attorney-client communications which would need to be excluded from evidence. This would be a question of resources devoted to the case. Defendants are not only entitled to speedy justice, but the seizure of their computers meant that they could not conduct business for the duration. And then the feds moved to dismiss their own case.

Finally, the federal EEOC (Equal Opportunity Employment Commission) prosecution of its civil case against Global Horizons and several Hawaii farms on allegations of a “pattern and practice” of illegal behavior against trafficking victims fell through.

The case at its beginning:

LOS ANGELES - In its largest human trafficking case in agriculture to date, the U.S. Equal Employment Opportunity Commission (EEOC) today announced that it filed lawsuits in Hawaii and Washington against Global Horizons Inc., a Beverly Hills-based farm labor contractor, and eight farms.  The EEOC contends that Global Horizons engaged in a pattern or practice of national origin and race discrimination, harassment, and retaliation, when it trafficked over 200 Thai male victims to farms in Hawaii and Washington where they were subjected to severe abuse.  Hundreds of additional potential claimants and witnesses are expected, according to the EEOC.

The EEOC asserts that between 2003 and 2007, Global Horizons enticed Thai male nationals into working at the farms with the false promises of steady, high-paying agricultural jobs along with temporary visas allowing them to live and work in the U.S. legally.  The opportunity came at a price: high recruitment fees creating an insurmountable debt for the Thai workers. When they reached the U.S., Global Horizons confiscated the workers’ passports and threatened deportation if they complained, which set the tone for the abuses to come.

The Thai workers were assigned to work at six farms in Hawaii (Captain Cook Coffee Company, Del Monte Fresh Produce, Kauai Coffee Company, Kelena Farms, MacFarms of Hawaii, and Maui Pineapple Farms) and two farms in Washington (Green Acre Farms and Valley Fruit Orchards), harvesting a variety of items from pineapples to coffee beans.  The EEOC asserts that the farms not only ignored abuses, but also participated in the obvious mistreatment, intimidation, harassment, and unequal pay of the Thai workers.

The case was defanged because a statute of limitation had long tolled:

U.S. District Judge Alan Ezra on Nov. 8 dismissed all claims stemming from any unlawful employment practices that allegedly occurred more than 300 days before a charge was filed with the EEOC. Global Horizons argued that under Title VII the EEOC cannot recover for conduct that occurred before December 2006, when the agency investigated the company.

The EEOC case is not yet closed, with recent activity involving settlement conferences with some of the farms. Until the case is concluded, it is uncertain whether trafficked workers will have received any restitution from any federal efforts to prosecute human trafficking in Hawaii.

Also thrown by the wayside is the issue of potential overexposure to pesticides on Hawaii farms that was revealed by Hawaii Reporter along with its investigations into the trafficking situation. Neither federal nor state authorities have moved to investigate whether labor trafficking brings along with it risks of exposure to toxic chemicals used on Hawaii farms. A trafficked worker is unlikely to be able to read label instructions for proper application of chemicals, and would not be inclined or able to file complaints should protective clothing not be provided, for example.

Hawaii Reporter’s articles should have been sufficient to open a wide-ranging government investigation, but apparently no agency picked up on the threat.

While it may be easy for the average person here or on the Mainland to ignore the hidden world of agricultural trafficking in our back yards, the local food movement has brought the problem right to our dinner tables. Trafficking can cover up illegal application of pesticides or other chemicals. The state has too few inspectors to police the application of chemicals even if it were interested in prioritizing that activity.

So the federal prosecutorial failures have resulted also in a concomitant failure to protect our local food supply.

If your family has the custom of saying grace before a meal, that prayer is all there is to protect you against high pesticide residues on the veggies.

This puts the US State Department reports on trafficking in this country in a new light. It’s one thing to cite favorable changes in anti-trafficking laws, but the failure of prosecutions is not noted. Nor are the consequences of that failure addressed.

Were Hawaii still an independent country, would the report have been more critical?