Here’s a photo sent to me by a reader, which reminded me that the city blocks sidewalks anytime it likes. [see: City should clean up its own act before measuring sidewalk at (de)Occupy (3/6/2013) ]

But what does a construction crew know about the ADA?

This sort of thing is fairly common. Sometimes wheelchair or scooter access is completely impossible. 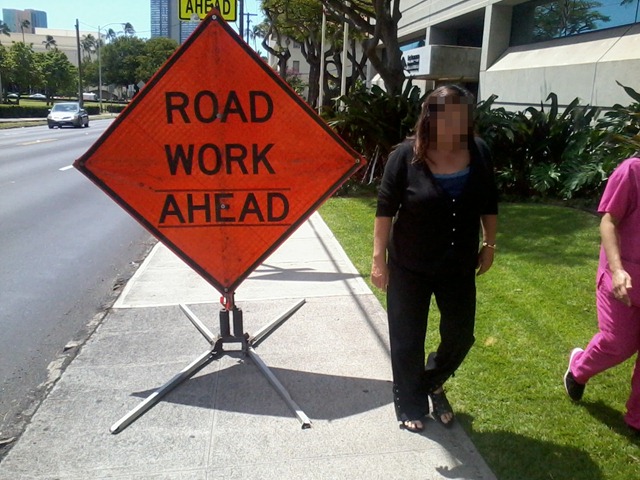 This next shot I took myself some time ago. It isn’t a blocked sidewalk, but it illustrates the thoughtlessness of some workers. There had been some kind of street maintenance and the workers pushed this newspaper box right up against the pedestrian walk button, and left it there. I wondered how a blind person would ever find the button. At the time, I was carrying a large poster board, and it was difficult for me to reach around the newspaper box to push it. I’ve also seen a construction sign (similar to the above) actually leaning up against a pedestrian crossing button, but I didn’t have a camera with me. 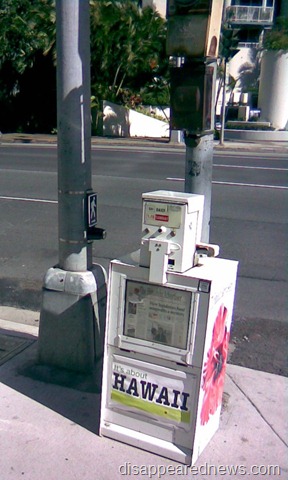 You know which sidewalks were fully blocked? The ones over by where the Occupy Hawaii people were (at various points). I had to stop running through there because of all the tents, furniture, etc. I didn't stop to take a photo, but did you report on that? That was much more of a problem than what you illustrate above (which while problems to be sure, are generally uncommon)


I am frustrated by the selective enforcement of the personal property storage law. I live near UH Manoa and run/walk along Dole St. on a regular basis. The sidewalk there is regularly partially blocked by moped parked on the sidewalk. Both sides of the street. In some places it would be impossible for someone in a wheelchair to get by -- there's barely room for me as a runner to stay on the sidewalk. And yet no enforcement of the personal property storage law in that neighborhood!


I think HPD is using the law to target the homeless (and deOccupy, of course). Otherwise, it probably takes a complaint. There may be other laws involved besides the personal property law.