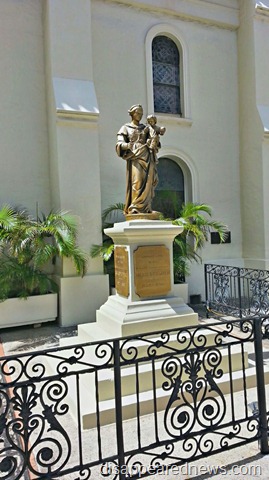 A press conference and protest was held Wednesday outside of the Cathedral of Our Lady of Peace in downtown Honolulu to urge Honolulu Bishop Clarence Silva to obey church directives demanding zero tolerance for child sexual abuse within the clergy.

At issue is the Bishop’s refusal so far to remove an accused predator, named in the lawsuit as Father George DeCosta, who is still an active priest in Hawaii even after two former students filed a lawsuit in state court on March 1 seeking damages.

Accusations against the priest were first raised in August and appeared in a local newspaper on the Big Island.

The alleged victims were able to come forward because of Hawaii's new civil window law. The law, passed last year, gives victims of child sexual abuse a chance to seek justice in the courts no matter when they were abused. Some other states have passed similar laws, which are necessary because short statutes of limitations would otherwise preclude adults from filing suit for events that occurred when they were much younger.

The protest in Honolulu came at a time that the Catholic Church is moving to deal with sexual abuse within its ranks. The issue has even entered discussions around the selection of the next pope. Chicago's Cardinal Francis E. George spoke to the press at the Vatican just the day before the Honolulu protest:

Whoever's elected pope obviously has to accept the universal code of the church now, which is zero tolerance for anyone who has ever abused a minor child, (who) therefore may not remain in public ministry in the church. So that has to be accepted. 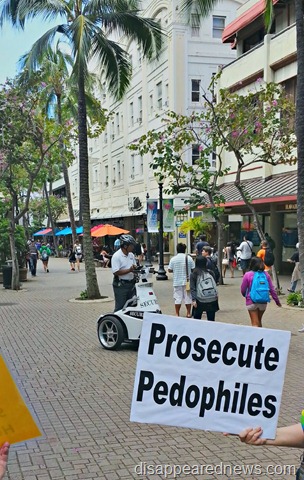 Joelle Casteix, Western Regional Director of the Survivors Network of the Abused by Priests, or SNAP, in Honolulu for the protest and press event, expressed the demand that the Honolulu bishop explain why an accused predator still lives and acts as a priest, with access to children, on the Big Island of Hawaii. Casteix demanded that he be immediately removed.

Both alleged victims were students at Damien Memorial School in Honolulu at the time of the alleged molestation.

Another suit had already been filed under the new law naming a former Damien chaplain and the Roman Catholic Church in the State of Hawaii.

Many thanks to those protestors who care enough about children to go out and warn parents and families that their children are at risk.. Some of the worst catholic priest predators are/were revered by the flock .. tina