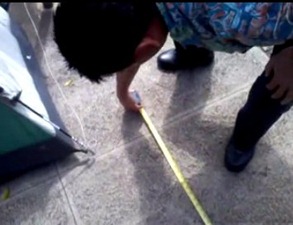 (de)Occupy Honolulu has been making front-page news after the city of Honolulu displaced the encampment in order to conduct tree-trimming. The new encampment is on a narrower stretch of sidewalk facing the Blaisdell complex, leading the city to appear with tape measures to assure that the sidewalk meets the ADA (Americans with Disabilities Act) 36 inch clearance requirements. (click image to view Occupy video on YouTube).

The city might clean up its own act first. It has placed obstacles on sidewalks in the form of poles and lampposts that offer less than 36 inches clearance in multiple locations.

On January 20 I took my own tape measure on a walking tour. The results are posted below. But first, the city’s latest attempt to make Occupy and homeless people simply disappear deserves some comment.

The city ramped up pressure on supporters of the (de)Occupy Hono­lulu movement Tuesday afternoon, tagging 15 of their tents, chairs, tables, pallets, signs and other items placed on the sidewalk on the makai side of Thomas Square.

What the article didn’t mention is that approximately 60 raids have been conducted by the city on this one location alone, and although none have been successful in removing it, the city continues as though the next time will be magic.

So the city came to tag once again and also to measure, finding that there was more than adequate room to pass. Referring to the ordinance under which the city confiscates, stores, and later returns property taken from Occupy and homeless people:

The stored-property ordinance requires that there be at least 36 inches of clearance on the sidewalk.

"We have to make sure all of our sidewalks are in compliance with the Americans with Disabilities Act," [spokes­man for Mayor Caldwell Jesse] Broder Van Dyke said via email. A check by city workers Tuesday afternoon showed "there were no tents or property blocking the sidewalk (less than 36 inches clearance) or causing a hazard," he wrote.

Before moving on to the city’s own ADA issues, it should be noted that no one wants to live on the edge of a sidewalk. The city’s current issue came about because it chased the homeless out of the parks and other areas, leaving them only the edge of the sidewalk to remain. While the news article focused on the (de)Occupy encampment, the city conducts many more raids on homeless encampments, which may include working families and children. It has never been clear to me how taking away someone’s last remaining possessions does anyone any good.

My tour of Ala Moana Blvd.

Based on an anonymous complaint to Disappeared News (who else to complain to? the city?), I turned on my dashboard camera and took a tour along Ala Moana Boulevard. This is the same route that Governor Abercrombie prettied up for APEC visitors last year. The images weren’t so pretty—they showed several spots between just Diamond Head of Ward Avenue to past Punchbowl Street where lampposts were installed not close to the curb in the grassy area, but instead right in the pedestrian right-of-way on the sidewalk.

After reviewing the video, I set out on foot with a tape measure to see if there was 36 inch clearance around the city-installed obstacles. Even if there was, the lampposts present an obvious obstacle to the use of the sidewalks by blind people. From my measurements, it appears that wheelchair users could have issues also.

Is this a lawsuit waiting to happen?

The pictures below include some more-or-less passable spots and at least two where a wheelchair could end up in the street. I don’t have a handy wheelchair to test this. The photos should be interpreted only as a record of the measurements I made that day.

Let’s begin the tour. The worst spots are towards the end.

The tape measure is stopped at the 36 inch point. So if the entire tape is on the sidewalk, the spot passes.

The fist spot is just opposite 677 Ala Moana Blvd. The curb side was completely blocked with an advertising sign. On the other side of the lamppost, with the green barrier in place, it is less than 36”. Ok, let’s give them this one, I kicked the barrier off the sidewalk and it passes, but just barely. 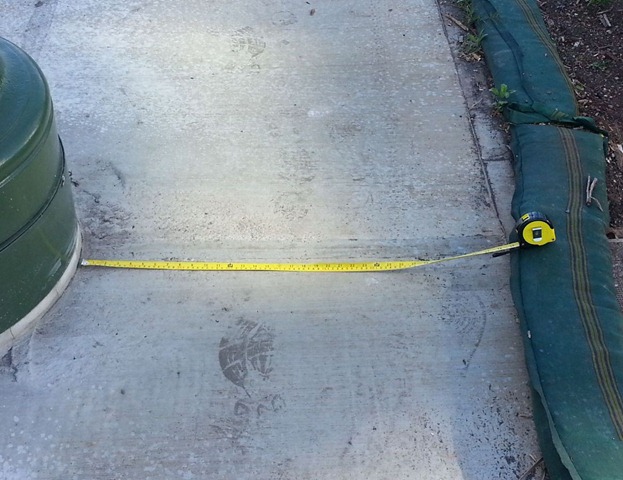 This one is close, but no prize--the wheel would be in the grass. 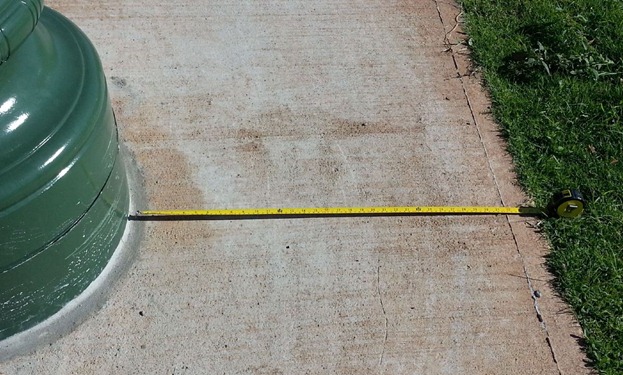 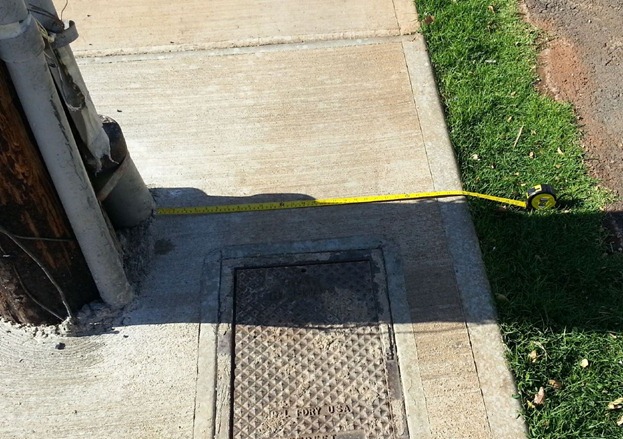 This next one was awaiting installation. I think it’s now been installed and is too close to the grass. Just a few more inches to the left and it could have made it… 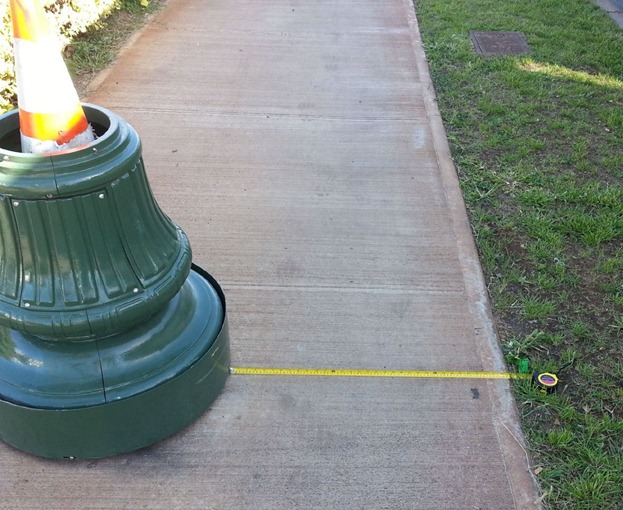 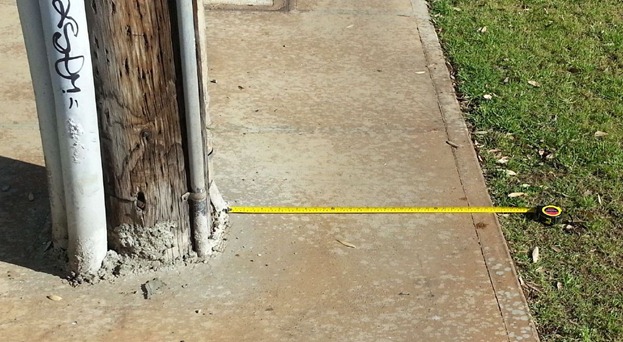 This next pic is Diamond Head of Ward Avenue. There is no place to go but between the two posts, and it is too narrow. The photo doesn't show the exact distance because the tape measure body is in the way. 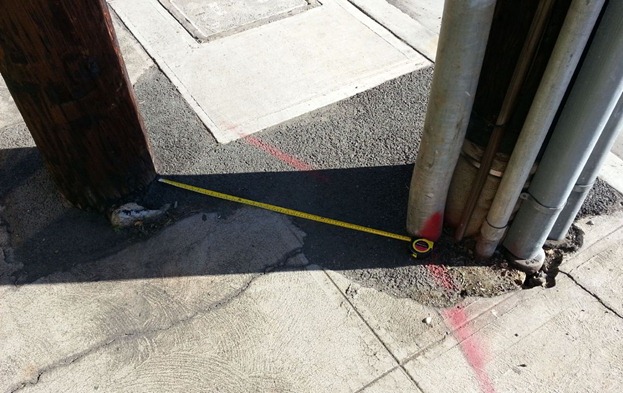 This is a more distant shot of the same two poles. 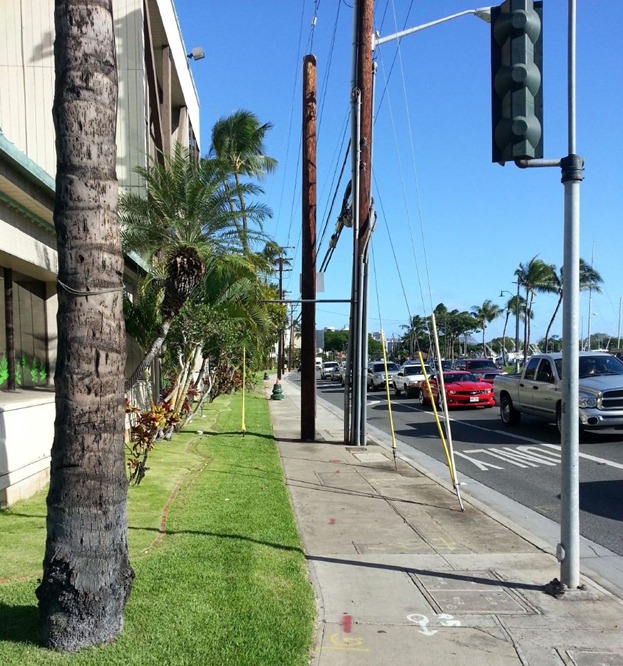 This is on the ocean side of Ala Moana. The post does not have 36 inch clearance on the public sidewalk, so one wheel might have to go over the clump of earth/grass and the garbage, which included broken glass. 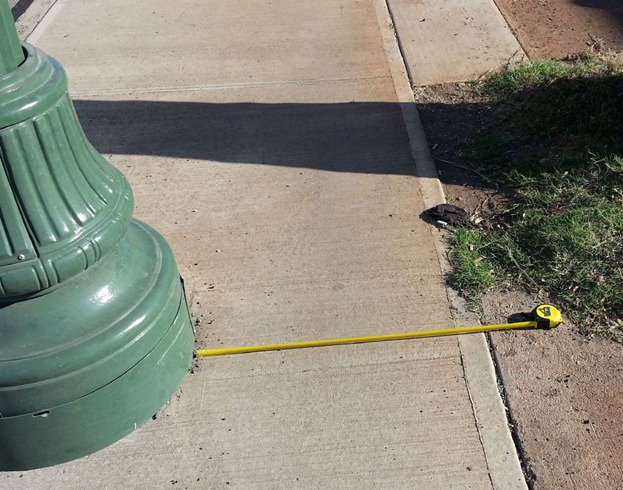 This is on the corner of Puchbowl and Ala Moana, at a crosswalk. The lamppost is in middle of the sidewalk. To the right, there is not enough clearance: 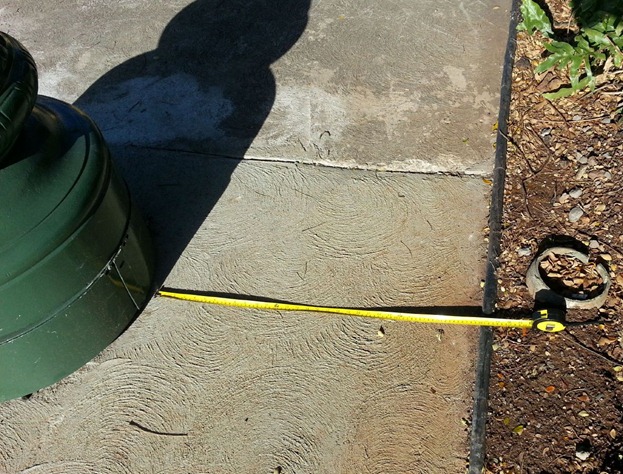 So ok, let's go around the street side of this pole. Oops, wheel falls over. It's just short of 36 inches, and the edge seems to be kind of crumbly too. 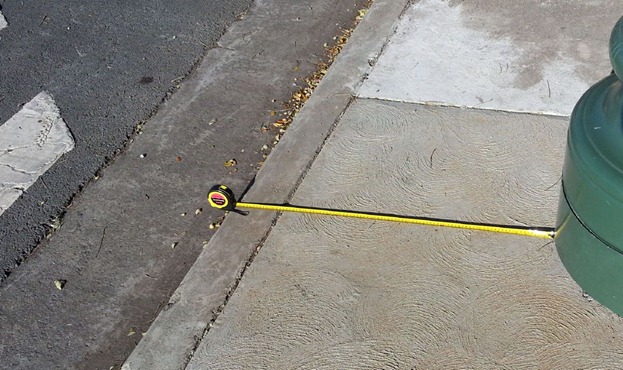 This lamppost, in particular, did not have to be there.

As long as we’re discussing the ADA, I’ve been posting a picture of an intersection on Queen Emma St. near the Vineyard Blvd. corner that lacks a sidewalk cutout, which would require a wheelchair/scooter user to ride in the street facing turning traffic off of Vineyard Blvd.  I reported that years ago and it still has not been fixed. 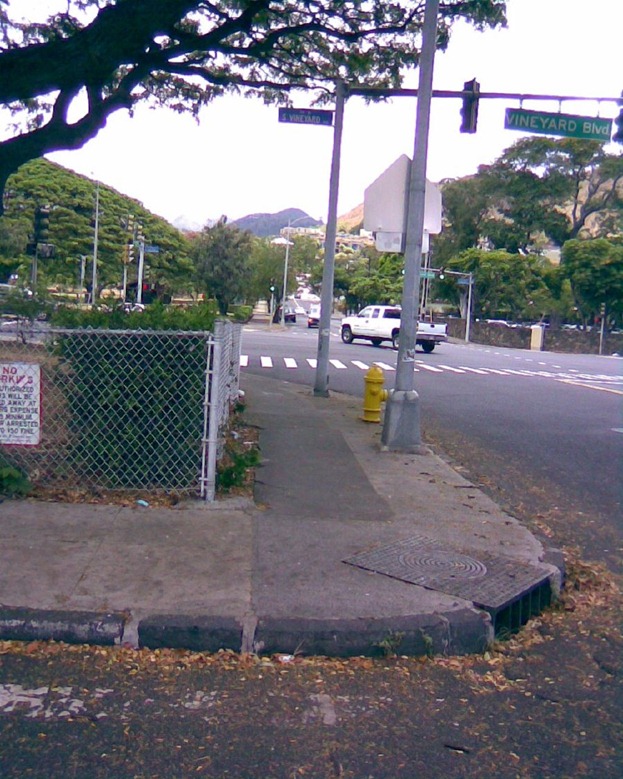 With regard to missing sidewalk cutouts or obstacles placed on sidewalks, those using wheelchairs or scooters are not necessarily injured or killed by these things. They more likely choose to avoid places that put their safety at risk. So the city’s disregard of clear sidewalks and curb cutouts denies those with disabilities their equal right to use city facilities (the public streets).

Disappeared News suggests that before the city measures the sidewalk near the current (de)Occupy encampment, it should consider measuring its own work first.

[Kokua Line, in the Star-Advertiser, reported that the city obtained an exemption from the Americans with Disability Act. That doesn’t make it right. The article did not mention if the exemption was obtained before or after the older non-complying light poles were installed.]

i hope these classic "lonely tape measure" photographs are shown to the federal judges in an ADA suit against the city and a civil rights suit by the occupy people! hahaha


Thanks for keeping the city and state honest, Larry, or at least trying.


Great article. We need more people out there documenting these and sending it to the press and the mayor. Harassing and deterring political dissent goes against the city's job. So is harassing the homeless instead of providing for their safety. Pushing them to the curb making the homeless even more vulnerable, and subject to public prejudice is not protecting and serving anyone. The city not providing a "common" area and pushing the homeless to the curb is the real cause of the complaints they are receiving.

Mr. Caldwell should take note that his predecessor did not do a good job taking care of the things he was actually responsible for in the maintenance of the city (real potholes and sewer maintenance). If he chooses to misuse public funds to harass people instead of taking care of the roads and highways, which are in shambles causing car accidents and damaging cars, he might find himself a one-term mayor himself.

People in Hawaii have been bred on aloha, even if they are schooled in western thoughts of property division. Harassment of homeless and political expression once understood does not fly. The "six degrees of separation" in Hawaii is more like three degrees. Almost everyone with family history in Hawaii include those who have been homeless at one time or another or at least a "living in a reconverted chicken coop" story... and proud of it. We are proud of the understanding and compassion that hardship often builds, which is why we frown upon being "manini" and mean-spirited.

The city should not steal Manuela Boy's tent.


Thank you for your comment. Very well written--I wish Mayor Caldwell would read what you have said.