The 9th Circuit ruling in Lavan v. City of Los Angeles seems very clear and to the point:

The narrow injunction bars the City from:

1. Seizing property in Skid Row absent an objectively reasonable belief that it is abandoned, presents an immediate threat to public health or safety, or is evidence of a crime, or contraband; and

2. Absent an immediate threat to public health or safety, destruction of said seized property without maintaining it in a secure location for a period of less than 90 days.
…
We conclude that the Fourth and Fourteenth Amendments protect homeless persons from government seizure and summary destruction of their unabandoned, but momentarily unattended, personal property.

In the case of the Occupy encampment, there may be an additional issue of First Amendment rights, since some of the material seized is expressive material.

Photos show that Honolulu has repeatedly violated its own ordinance by seizing and destroying homeless and Occupy possessions on the spot.

The City and County of Honolulu have used dumpsters to cart away belongings from Occupy and homeless people as documented by photos and videos, some of which have been posted here and others on The Doug Note. 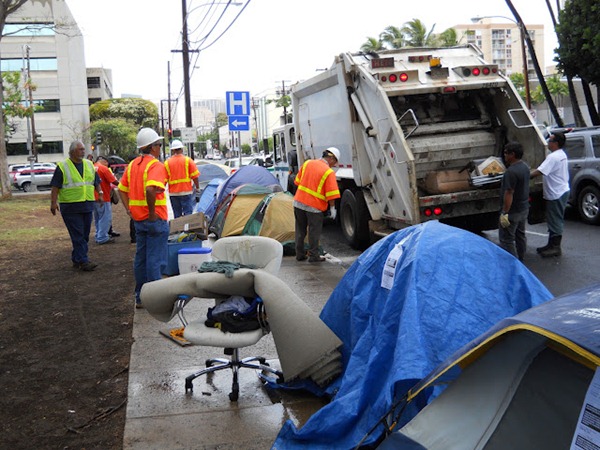 "Look, it is a difficult situation, but the question is: Is there some exception when it comes to the homeless that you don't destroy people's property without due process?" said Carol Sobel, who represented the homeless in the case. "And the court said, no."
…
Nine homeless people sued after losing their possessions, including personal identification documents, medications, family memorabilia, toiletries, cell phones, sleeping bags and blankets. The men and women had left their property in carts provided by social service groups.

A district court ruled for the homeless, and the city appealed. In upholding an injunction against Los Angeles, the 9th Circuit said a person does not lose his or her 4th Amendment protection from unlawful seizures by violating a city ordinance.

It would seem that Honolulu could be subject to the same restrictions as Los Angeles—if an attorney were to file a case. Another issue might be whether those whose possessions have been illegally seized are entitled to damages.