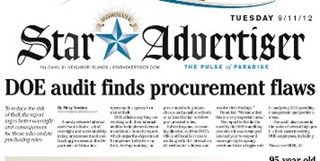 Mary Vorsino’s front-page story in today’s Star-Advertiser, DOE audit finds procurement flaws, is accurate enough, but woefully inadequate. A better headline might reflect that the DOE’s procurement violations are pervasive and have been the subject of prior state audits.

Since the DOE has been found in those audits to be violating the law, the characterization of their problems as mere blemishes is disingenuous. Readers could also be mislead to believe that these issues have just been discovered. 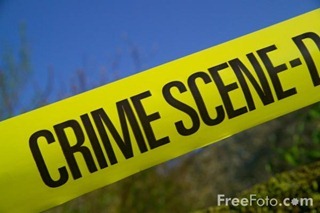 So to fill in the news gap, I’m repeating part of an earlier article, Taxpayers pay for DOE wrongdoing, 8/14/2012). The snip refers to an auditor’s report released last month that explores how well the DOE complied with prior audit reports. It would be misleading to dismiss “an organizational culture of disregard for procurement rules” as a mere flaw. If you have a newspaper in hand, by all means read today’s article, which simply adds to the dossier of wrongdoing at the DOE.

From the summary of the auditor’s findings in the just-posted report:

Procurement Audit of the Department of Education: Part 1 and Part 2, Report No. 09-03 and Report No. 09-04
In part 1 of our report, we found no evidence that the department has the mechanisms and functions to monitor and review procurement compliance on a regular basis. Even though our audit was based on a relatively small sample size, we uncovered numerous instances of non-compliance and violations of procurement rules and regulations. In addition to the high volume of violations, we also identified several risk factors and indications of potential fraud, which compelled us to expand the scope of our work. We issued a separate report presenting the results of that expanded work.

Part 2 of our report revealed an organizational culture of disregard for procurement rules in the Office of School Facilities and Support Services (OSFSS). That culture had allowed office directors, managers, and staff to believe they had the discretion to unilaterally determine whether compliance with procurement laws and rules was in the best interest of the department. As a result, non-compliant procurement practices were tolerated and, more importantly, unethical and possibly fraudulent behavior has been allowed to thrive.

Today, two of the employees remain in their same jobs as heads of their respective OSFSS branches, which have been given even greater procurement authority with greatly reduced, if any, oversight by the Procurement and Contracts Branch. As a result, the risk of ethical misconduct in the OSFSS remains high, which creates a perception that the department has done little to address the issues.

The detailed report is full of morsels such as this one:

Our audit report had found that the former assistant superintendent violated state procurement laws by instructing a construction consultant to hire a specific sub-consultant to perform work for the department unrelated to the contract. The sub-contractor was identified as a former principal with no construction experience.

We currently found that the department decided not to impose serious disciplinary action against two of the three DOE employees who had committed multiple violations of board policy, the Ethics Code, and department procurement policy guidelines regarding various school projects. Instead, of the three department employees, one was suspended for three days without pay but only after receiving more than three months of paid leave. He then was allowed to return to his old job. The second employee was not suspended but temporarily assigned within the same branch after receiving nearly four months of paid leave and retired under his old position while earning the same salary as he had previously. The third employee was demoted and took a pay cut but was later returned to his old job.
…
In short, without the mechanisms and functions to monitor procurement compliance at OSFSS, the department has made little progress since our initial report in 2009. In fact, we would argue that by returning procurement authority to the OSFSS and returning staff who committed multiple violations of the Procurement Code to their previous positions after relatively little punishment, the culture of disregard that we found three years ago has only been reinforced.

The report also mentions evidence that criminal behavior may have occurred, but the Attorney General could not proceed because the statute of limitations had expired.

In Report No. 09-04, Procurement Audit of the Department of Education: Part 2, we discovered numerous instances in which department personnel manipulated the professional services selection process and awarded contracts to predetermined consultants. For instance, for a $300,000 construction management project selection, the Project Control Section head bypassed established procedures by hand-picking the selection committee members and recommending a specific firm. The public works administrator then led the committee as its chair, documented the results selecting the recommended firm, addressed the results to himself as public works administrator, and approved the results on behalf of the branch.
We also found several other alarming practices within the OSFSS that appeared to be fraudulent and unethical. In one example, a high-ranking department official instructed a consultant to hire a specific subconsultant in exchange for additional contract funding, thereby evading the competitive procurement process. The sub-consultant, who had close ties with the department, performed work under a department program that was unrelated to the contract’s scope. Another inappropriate action involved selection committee members agreeing via email to change a prior selection decision to award the project to a vendor who was previously unranked, but had been improperly allowed to begin work on the project. The committee then falsified the selection documents to reflect the modified decision as the original selection.

The DOE non-compliance with procurement laws as well as its own rules and regulations, costs taxpayers big bucks.

Instead of soft-pedaling the DOE’s wrongdoing, the newspaper would do us a better service by adding up the consequences that are charged to the taxpayer. And it could stop treating the DOE with kid gloves.