How your news gets disappeared: Raid 23 on DeOccupy Honolulu

But todayʻs raid offered a glimpse into how news is effectively disappeared in the first place. I expect to see a one sided story about todayʻs raid on tonightʻs news (KHON I think, but I donʻt watch TV so I canʻt ID the reporter). I suspect one sidedness because I was at the raid, livestreamed and photographed it, saw how the "news" crew covered only a very carefully selected one half of the story.

But I jump ahead of myself. I mounted a Flickr set (here) to tell the story, but here are some of the highlights:

Per HPD and DFM current practice, they cordoned off the entire area in crime tape after forcing everyone out of the area. 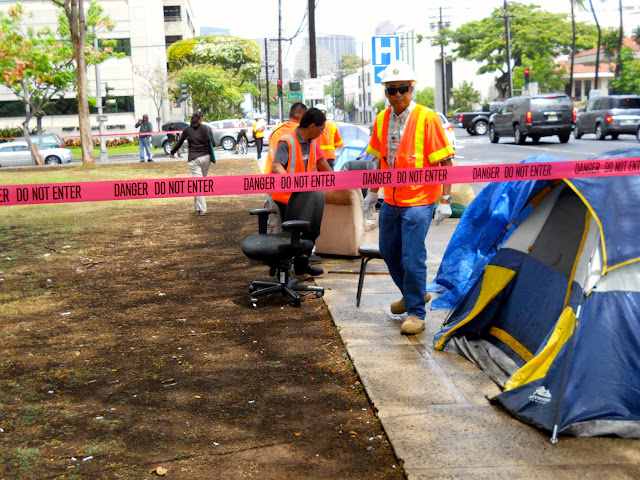 Raids are led by Coordinator of the Cityʻs new Office of Housing, Trish Morikawa, and Director of Facilities Maintenance Westley Chun: 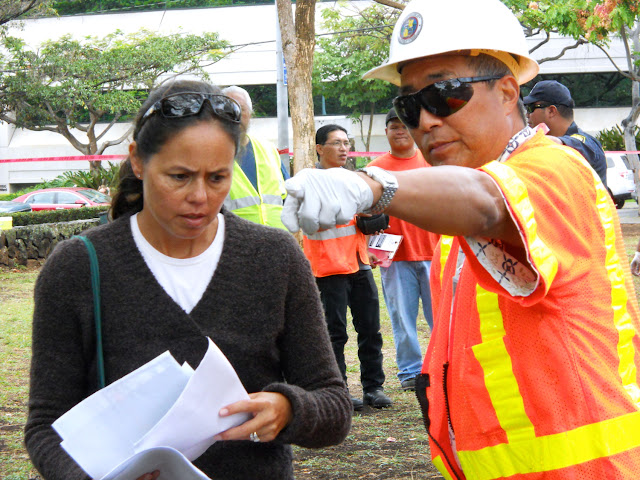 Morikawa is officially supposed to help the homeless, but seizure of dwellings (and clothing etc.) causes homelessness as those who have the least are set out on the sidewalk without even a change of clothing. She was a deputy prosecutor under Pater Carlisle when he was Chief Prosecutor.

Westley Chunʻs DFM is suppose to be fixing potholes. Why is he leading raids on homeless? It's a cabinet level position that pays $112,000. He will be waving a Carlisle sign on a corner near you. 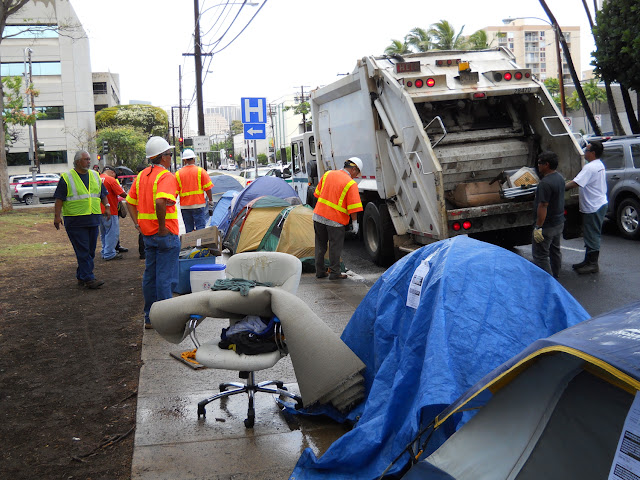 HPD and City crews then moved to the Victoria Street homeless encampment where they cordoned off the corner again. 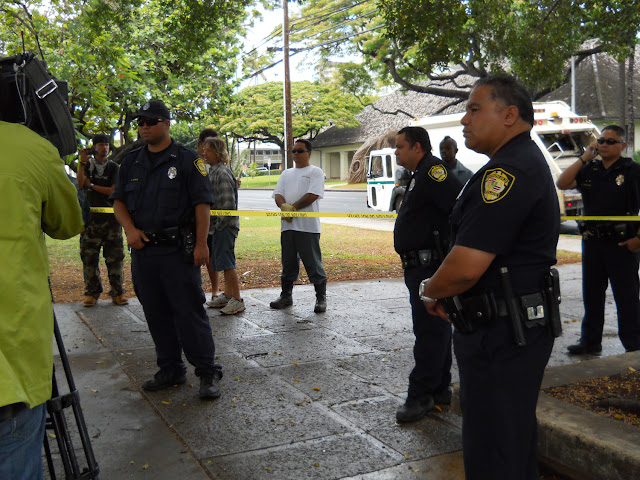 In response to press release the "news" shows up. Yay, the people of Honolulu will find out whatʻs going on. NOT: 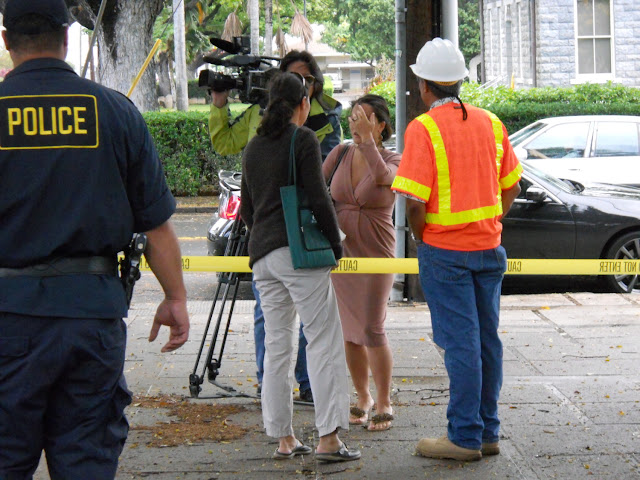 Westley Chun was interviewed, but no one at DeOccupy Honolulu, and no homeless person either. Would you believe either of these people have something to say about all this? Should we make a judgement about these raids based only on what the raiders have to say?

And hereʻs the spooky question: How much of the rest of the news you see is manufactured like this?

Hereʻs the full Flickr set arranged as a narrative: 120626 Raid on DeOccupy

(De)Occupy Honolulu is in solidarity with Occupy Wall Street and the worldwide Occupy Movement which asserts that a democratic government derives its just power from the people, but corporations do not seek consent to extract wealth from the people and the Earth; and that no true democracy is attainable when the process is determined by economic power. We urge people to exercise the right to peaceably assemble, occupy public space, create a process to address the problems we face, and generate solutions accessible to everyone.

Excellent article and commentary - especially the pic of the garbage truck (WAIT - doesn't the law say the goods are being "stored" for the homeless to pick up? What! And the fact that only one side of those affected were interviewed (not the occupiers nor the homeless). Balance reporting?????
And lastly, if this is how the news is 'manufactured' how else are we being deceived?
Thank you Doug. And thank you Larry.
A really, really important story on our government's truthfulness, and the news media's propaganda.

Take a day
And walk around
Watch the nazis
Run your town ...


Thank you for speaking the truth. Instead of treating the homeless like trash and dumping their belongings into garbage trucks, how about use the money spent on RAIL PR to help the homeless with food, shelters, and medical care.


has anyone tried suing the perpetrators through the civil court? no lawyer as a sovereign?


When Trish is disposing of "trash",
she will dish out injustice and mash
...the possessions in bags
...of the homeless - NO TAGS?!
she won't wish to help those without cash.

If the news report's only half-true,
then what should concerned people do?,
...photograph and livestream,
...even work as a team,
'til the real situation's in view.