Civil Beat reported today on a 9th Circuit ruling that the seizure of homeless people’s property in Los Angeles is unconstitutional (Federal Ruling Brings Homeless Belongings Ban Into Question, Civil Beat, 9/10/2012). The writer compared the differences in the Los Angeles law and the Honolulu ordinance and suggested that the Honolulu ordinance may not be illegal, based on consulting a single attorney.

They’ve missed the heart of the issue, however. As H. Doug Matsuoka has documented in his articles here on Disappeared News, the city has not been following its own ordinances. It has been seizing properly that would appear to be protected under the Fourth and Fourteenth Amendments, exactly as Los Angeles has done.

While Act 54 requires the tagging and storing of property, the city has seized untagged items and destroyed them. Here is an image posted along with an August 8, 2012 article documenting a raid by the City on the Occupy encampment on Beretania Street. 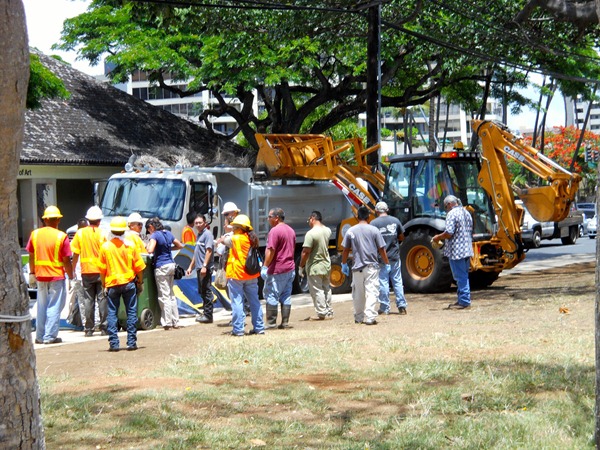 That dump truck is not taking tagged articles safely away for storage, as the Honolulu ordinance requires.

Civil Beat’s article stopped at the validity of the ordinance. Evidence that I have seen in the form of reports, snapshots and videos, indicates that the City and County of Honolulu is behaving no differently from Los Angeles in practice. Their seizures would appear to be equally unconstitutional.

I hope CB will revisit this and let their readers know what they discover.