From today’s paper: Lack of hot water persists for years at public housing (Star-Advertiser, 7/22/2010) we learn of yet another case of gross neglect on the part of our local government. If this were New York City, there would have been lawsuits a long time ago. No hot water? Impossible.

If we didn’t get hot water right away back in Brooklyn, we would bang on the pipes until we got some.

You may remember the public housing elevator fiasco. A newspaper reporter had no trouble locating spare parts, but our government couldn’t do it.

Today’s article reminded me that I had started a “stuff left broken in Honolulu” photo collection, thinking it would be interesting to show it next time there’s a public meeting on Mufi’s train. After all, a train ‘way up in the sky can’t be neglected the way so much else is in our town. We’ll get back to the train in a moment.

Everyone knows about Aloha Stadium, still rusting away slowly. Do you remember Neal Milner’s article in the Advertiser, Broken Flush (2/14/2010)? It was about all the urinals at our great university that somehow stay broken. There have been umpteen articles about the leaky roof in Hamilton Library. I could never understand why they continued to store books there, knowing that the disaster would repeat and repeat and repeat. But since this is Honolulu, I should not have been surprised.

I’ve run pictures of sidewalks that never get repaired and of a bus stop shelter that has had a broken roof for four or five years. A couple of baby trees have taken root up there, showing how little attention the shelter has had (see: Mufi will have to pray a bit harder to keep the city from falling apart, 7/1/2010). 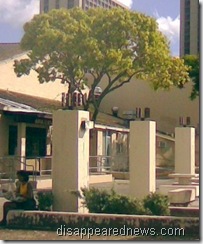 Mayor Mufi took the trellis tops off of the Chinatown chess tables, but left the ugly posts and rusting metal brackets on top. Ugly, ugly, and maybe left there forever. 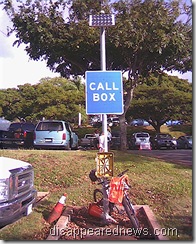 Here’s part of my collection. It’s an emergency callbox at Kapiolani Community College. There has been no phone in it for between one and two years at least (that’s when I first noticed it).

Imagine it’s late at night. A young female student parts from her friends and heads towards her car. She notices shadowy figures following her. So instead of going to the car, she heads instead for the emergency call box. That’s what it’s there for, right? To get help when you’re in trouble.

She breaks into a run and a cold sweat. They’re gaining on her.

That’s what could happen as a result of this bit of neglect, this emergency phone that never gets fixed.

Two months ago the phone got some attention. 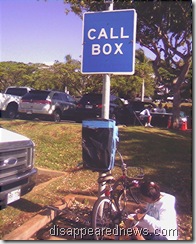 Yup, it’s been covered with a plastic bag for more than two months, but still no phone there.

Nothing special, just another example of how well we maintain things.

Back to the train. As I understand it, the plan is to have at most one restroom per station.

The city's blueprints call for one unisex public restroom with one toilet at each of the 21 stations. And the restrooms at all but one station will be locked with access available only by contacting a station attendant. A Middle Street Transit Center will have multiple unlocked restrooms.   [Star-Advertiser, Rail stations to have 1 restroom apiece, 7/12/2010]

What folly. Suppose it goes out of order? Will it take months or years to get the one restroom fixed? And if we riders need to pee? Or if station personnel need to pee???

I’ve ridden trains most of my life. Stations have restrooms. In Tokyo, even if you were not riding the train, you could ask a station attendant to let you go inside where

the toilets were. No charge. Of course, the restrooms could accommodate large numbers of people, not just one. In the old days they stank. These days they are models of cleanliness, making one’s transit experience something of a pleasure (yes, it feels good when you finally get to the restroom, bad, bad, bad if there isn’t one, or if it’s out of order.

All I would suggest is remember which mayor brought you the wonderful transit system with such great consideration for the comfort of its riders.

The absurdity of planning only one per station is bad enough, but knowing that each one will be out of order only compounds the piss poor planning process we’re being subjected to.

It’s better to protest now then when you need to go.

But why don’t we protest the whole thing? Why do we accept crumbling sidewalks, busted bus shelters…. and I just remembered the beach toilets….  ok, time to end this rant.

Welcome to Honolulu, friend Tourist. Be sure to pack some diapers for your train trip out of Waikiki.

I feel ill at the thought of the city adding one more project to neglect..the rail system....Better to use the money to pay people to keep present city restrooms clean.