He also said he often tells his staff to pray about decisions.

“I made it clear from day-one that this will be a prayerful administration. This administration will always seek guidance of the Lord.”

My mom sometimes admonished me that “God helps those who help themselves.” The message was quite clear. Get off my butt and do something about what I was complaining about. So Mufi, how about getting things fixed in this town? Sorry, but you need to do more than pray. Your mom might have given you similar advice, I don’t know, but it is something that many moms do.

My mom would have had a few words for Honolulu’s Department of Transportation. They would be different from Mufi’s directive, I’m sure. 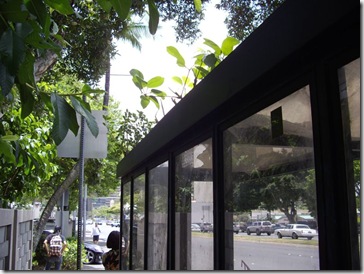 I found it a bit hard to properly photograph this busted bus stop. As I wrote earlier, in The uglification of Honolulu (6/19/2010). I still don’t have a great picture of it, there’s no really good vantage point.

This first pic shows trees (actual trees) growing from the top of the shelter. The second picture is a front view of the busted roof. When it rains, at least half the bench can get soaked. 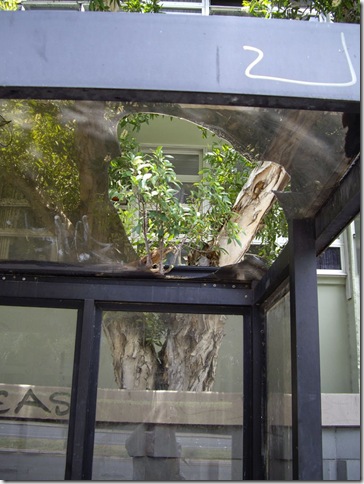 The shelter has been in this condition for years, perhaps four or five or more. I have called it in twice. Here’s a front view.

So now I ask, are these the same people who will be maintaining our rail system, if it gets built?

If so, I hope the architectural drawings might be revised to include a little dose of reality. Why not draw in some busted roofs, rusted rails, and cracked platforms? Let’s get real. 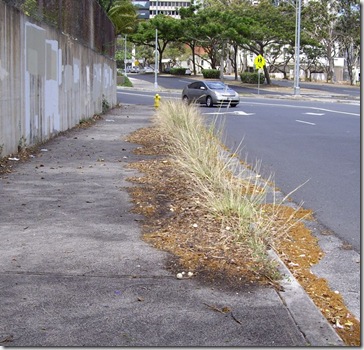 Just a block away from that bus stop towards town is a sidewalk beginning to decay from neglect. This is just a block mauka of Beretania St. 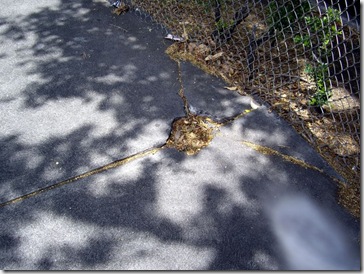 Here’s my favorite sidewalk pothole. It’s deep, but filled with leaves, which make it extra dangerous.

I’ve been following this pothole since at least 2008 (see:City's neglect goes on and on, resulting in expensive lawsuits (6/3/2008).  That article also featured grass destroying sidewalk on a different street. It has a picture of a street corner still waiting for a curb cutout. The cutout hasn’t been made today, and wheelchair or scooter users must navigate through a particularly dangerous spot if they are to cross Vineyard Boulevard. Actually, they know better than to risk their lives and so they go out of their way to avoid that spot. Click over to that article to see the pics.

There’s a larger issue of pedestrian deaths due to Department of Transportation failure to provide protection at dangerous crosswalks. 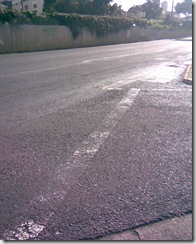 Speaking of crosswalks, the DOT’s habit of neglect stands out here as well. This is, or was, a crosswalk. Without paint, it’s hard to know. When it rains this leftover smudge becomes almost invisible.

Somewhere in my photo collection is a shot of Metcalf St., where in someone’s wisdom a bike lane was painted down the middle of the street, except that the paint was allowed to erode, becoming all but invisible. That put bike riders at extreme risk. It could have been a lawsuit waiting to happen, assuming the rider survived the potential collision.

Google Earth reveals that other cities are not necessarily like this. See: Hawaii's quest to remain a third-world country (1/13/2008).

And just a reminder, this article is about rail. Ian’s is about Mufi.

Honolulu is a slum. There's no other word for it. Third World countries have roads in better repair. Beach park restrooms are filthy and vandalized. And it was so before the homeless turned them into campgrounds, so you can't blame it on them. Everything that is public property is trashed and decrepit. If the Muftrain ever gets built, poor maintenance will turn it into a deathtrap within a year or two.


Thanks, Larry, nothing like a photo to point out how wrong the priorities in Honolulu & Hawai'i government. Now we have furlough days for our pools, but rather than use common sense to stagger the closed pools, for example Kailua pool closed this Friday, 2nd, but Kaneohe pool open, etc. so that the seniors and citizens can continue their exercise, all pools are closed at once.I agree that restrooms are filthy. So much for disease prevention!


I think they're waiting and hoping the curbs will deteriorate and crumble into the gutter and then claim them as wheelchair curb cuts.