What was MSNBC doing in the bunker before the Hawaii missile scare?

What was an NBC news crew doing at the Hawaii Emergency Management Agency on Friday and perhaps Saturday, the day of the false nuclear missile alert?

What was their interaction with the computer operator, and could it have contributed to the “human error” that resulted in widespread panic in Hawaii?

An NBC "Left Field" camera crew was present at the Hawaii Civil Defense Diamond Head bunker on Friday morning and perhaps on Saturday, the day of the false nuclear attack warning. I tried to get more information. NBC, however, at least those I queried, did not respond.

There’s no doubt that the crew visited HEMA on Friday, the day before the alert, because videos are still on the web of their report. Here’s a screen cap of one: 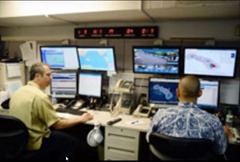 You can even see what may be the now infamous Post-It sticky with HEMA’s password on it – look at the lower screen, second from the right. There it is, at the left corner of the screen.

As Hawaii News Now noted, there should certainly not be a password visible when a news crew is present. Or at any other time, of course, but that’s an illustration of how computer savvy the HEMA folks may be. 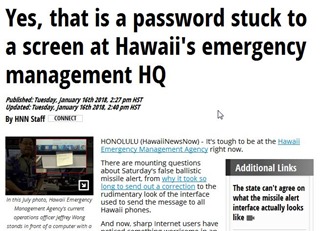 There is no way, without an investigation, to know what the interaction between the news crew and HEMA staff might have been. What might HEMA have changed or modified for the interview? As the state reacted to news reports, it turned out that it had faked not one but two screen shots of the computer system menu that was involved in the incident:

Were one or both of these created to show to the camera crew? Curious minds want to know. Was the alert software modified for a demonstration?

When I learned from a tip that a news crew may possibly have been present in the command center, I tried to learn more. I was not successful, so it is possible that there is no news here, nothing of concern. But I am chagrined that NBC ignored my inquiries.

I did what I have done before when I wanted to contact a news team or reporter when there was no email available—I emailed NBC’s media office for assistance on Monday. But after a bit, there was no reply, so I called them only to get a voice mail message.

Ok, it was a holiday. So I called again on Tuesday, asked my question, and did not get help—they advised me to email. So I emailed again. No reply. I also sent a message via the Signal app to their tip line, which is always monitored. Again, no reply.

Now, Disappeared News is just this little blog. If a professional journalist had been asking, perhaps NBC would have responded.

Most likely there is nothing interesting in this, but it would have been reassuring to get some reply from NBC. As this incident is investigated by various state and federal agencies it would not hurt to check if HEMA might have been showing off for the camera crew, for example, and in some way set themselves up for the false alarm incident. Remember, they gave more than one version of what their menu looked like, by way of explanation for the “human error.” We need to know why there were multiple versions of this menu.

As to the “human error,” the death threats the operator has received and the calls for the employee to be fired, I think it’s been established by now that the design of the emergency alert system and its supervision by Hawaii EMA management was totally defective. What is dismissed as “human error” is very often defective design.

I can add to that my evaluation that the lack of a quick and easy way to send a cancellation message was a failure we should be concerned about if we care about our state government’s apparent inability to create modern computer software systems. Suppose a missile was launched—and blew up enroute. Suppose it landed way off target. Suppose it was a false alarm from the get-go. You’d think the system could routinely handle those and other situations by transmitting the cancellation. But no.

Finally, I’m also mildly curious why some NBC reports formerly available on the web can no longer be accessed. Here’s one that I googled again just before writing this article:

When I clicked on the link, I found that it is no longer publicly available:

It should be pretty clear to all that this was not a mistake, but a government decision to create fear and anger at North Korea. It worked.


I suspect they are not competent enough here to make that decision. Pending investigation, I'll stick to the alternative theory that Hawaii's state government just can't produce good software. There may also be the issue of faulty public administration.

If it were the feds, I might be with you, though. We live in strange times. Let's see how well this is investigated.


On the day of the event, the "feds" quickly countered with "it is a state level issue only". Methinks the lady doth counter too quickly in said dismissal.

To further the "instability" the state then went on to test the sirens throughout Oahu through every gyration they could be put through. They did this for hours, it was disturbing. They picked Valentines day as the "proper" day to do this, a day when love and peace between men and women should be the order of the day.

I sent them an email indicting their incredibly bad judgement, and got no response.