Kokua Council’s November 2017 meeting was on the subject “Disaster preparedness—can we protect our seniors?” The panel never got around to that topic, instead holding a typical “organize your emergency kit” presentation.

At the end there was space given to questions from the audience. I asked Vern Miyagi why HEMA did not have a Twitter account dedicated to emergency notification.

If they did, and if they publicized it, people across the state could follow the account and have the messages sent to their smartphone or handset. Yes, even the older technology is capable of receiving SMS (text) messages.

While there is no substitute for HEMA sending a proper cancellation notice after a false or real alert (say, if the missile misses or if it is blown up in flight), a widely followed Twitter account can reach many people. And those people can spread the word to neighbors, for example.

Miyagi said they have a Twitter account. To that, I countered that it is useless for the purpose because they are using it for all manner of frivolous messages.

I don’t want all the “Happy Aloha Friday” messages sent to my phone. Only the emergency messages, please. 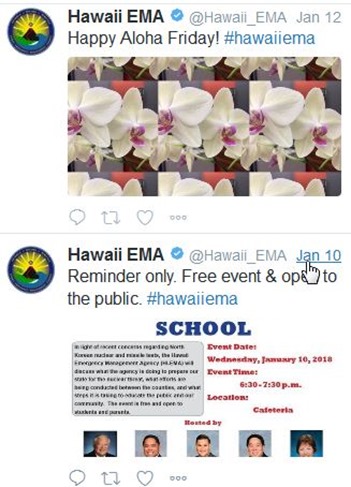 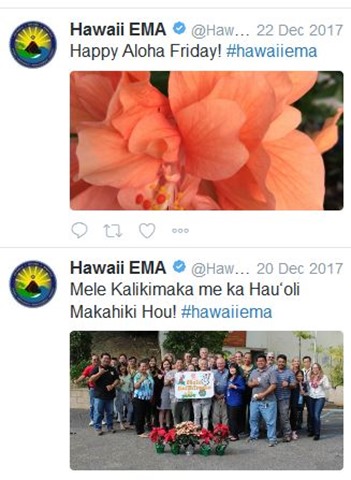 As long as you’re here – did you know that Honolulu Mayor Caldwell has removed the island from the Nixle warning system? That system also could have been used last Saturday to let people know about the false missile alert.

From a Wikipedia page:

I think you see what I mean.

Miyagi didn’t. They still don’t have an account dedicated to emergency notification.

My suggestion is not perfect, it’s not intended as a cure-all. But it is very easy to do. Real easy. Then they can publicize it. They can use their existing account to spread the word. They can create public service messages. Newspapers will report the account to readers, as will the local cable TV news and radio news and talk shows.

But Hawaii EMA just doesn’t get it. I don’t think they understand.

So let’s not fire the operator who “pushed the wrong button.” Let’s replace anyone in management who is found not competent to hold the position.

Cancelling a missile alert should not be rocket science.