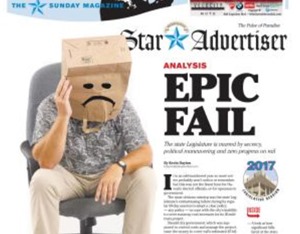 The article is by a political reporter, but its positioning, its thrust and its conclusion represent a position on the part of the paper’s editors.

Labeling what many consider a sensible decision as an “Epic Fail” in screaming all-caps and accompanied by a cute space-wasting illustration is a clear indication that the paper feels that state taxpayers should somehow rescue this ailing city project that threatens to bar sensible development and maintenance expenditures into the indefinite future.

I cannot do better than post here the arguments made on the Senate floor on May 4 by Senator Laura Thielen. Here’s the video. I would like to pretend that I could state the arguments as well as she could, but that’s not true—please watch the short video which is worth a couple thousand of my words (click the thingy at the lower right for full screen):

[thanks to Donna Wong for pointer to this video]


The Star-Advertiser depends on full-page ads by condo developers. There’s not a development that won’t qualify for a front-page article with space-guzzling photo despite the fact that any particular new or planned condo in Honolulu is far from important news. Rail is expected to bring massive development along its route and so it’s understandable why the paper might take this position. Development equals ad revenue.

For the rest of us, though, we might well prefer air conditioning in the schools or (say) a reduced maintenance backlog or funding of infrastructure improvements that benefit all citizens of the state. None of that will happen if rail drains the needed funds out of state budgets for the indefinite future.