“
Following an appeal to the court by the board of the Office of Hawaiian Affairs (OHA), the First Circuit Court upheld the Office of Information Practices’ Opinion Letter No. F15-02, which had determined that the OHA board violated the Sunshine Law when it (1) engaged in serial communications outside a meeting when deciding to rescind a letter sent by its Chief Executive Officer (CEO); and (2) did not allow the public to testify on an agenda item scheduled for executive session.—from OIP: What’s New: Court upholds OIP opinion on OHA, 5/5/2017
”

From West Hawaii Today in a 2014 article:

The Office of Hawaiian Affairs violated the state Sunshine Law when trustees corresponded by telephone and email before sending a letter to U.S. Secretary of State John Kerry rescinding an earlier letter by Chief Executive Officer Kamanaopono Crabbe.

Then the board violated the law again when it refused to allow public comment before conducting a closed-door session discussing Crabbe’s conduct.

That’s the finding of the state Office of Information Practices in a Nov. 7 opinion responding to a complaint by six Hawaii residents.

Let me answer my own question, “Will state agencies learn from court ruling in OHA Sunshine Law violation?”

If OHA had learned what Hawaii’s Sunshine Law requires, it would never have taken the matter to court. The OIP opinion was very clear, and has now been supported by a judge.

OHA is a state agency. Whatever they spent attempting to justify their wrongdoing in court is at taxpayer expense.

Following an appeal to the court by the board of the Office of Hawaiian Affairs (OHA), the First Circuit Court upheld the Office of Information Practices’ Opinion Letter No. F15-02, which had determined that the OHA board violated the Sunshine Law when it (1) engaged in serial communications outside a meeting when deciding to rescind a letter sent by its Chief Executive Officer (CEO); and (2) did not allow the public to testify on an agenda item scheduled for executive session. As allowed by law, OIP did not participate in the court’s April 19, 2017 hearing and let its opinion speak for itself, which resulted in the court’s “Order Denying Office of Hawaiian Affairs, Board of Trustees’ Motion for Summary Judgment” in S.P. No. 14-1-0543 (JPC).

The May 1, 2017 decision by Judge Jeffrey P. Crabtree has been posted to OIP’s website.

It’s not as though this decision breaks any new ground. Disappeared News reported in a 2013 article on attorney Lance Collins’ win in the Hawaii Supreme Court in a case involving the Kauai County Council’s serial recesses and serial communications in deliberate violation of the Sunshine Law. A snip of the opinion from page 66:

… serial communications regarding Council business circumvented “the spirit of the open meeting requirement” and “thwarted and frustrated” the “strong policy of having public bodies deliberate and decide its business in view of the public.

That decision cited other case law.

If OHA wasn’t aware of its responsibilities at the time of the Crabbe letter to then Secretary of State John Kerry, it was educated by the OIP opinion. It should also have been educated by its attorney.

But they refused to learn.

So one state agency contested another in state court. We pay for all this, of course.

Over the years I may not have agreed with everything OIP decides, but that may be my problem. Overwhelmingly they explain and uphold the Sunshine Law when a state agency ignores a public records request, for example, or violates the open meeting laws.

And that’s with a greatly diminished budget over the years—the Legislature’s odd way of asserting its power over an agency charged with enforcing laws that the Legislature itself has passed (this is from a 2015 tweet by @NathanEagle of Civil Beat): 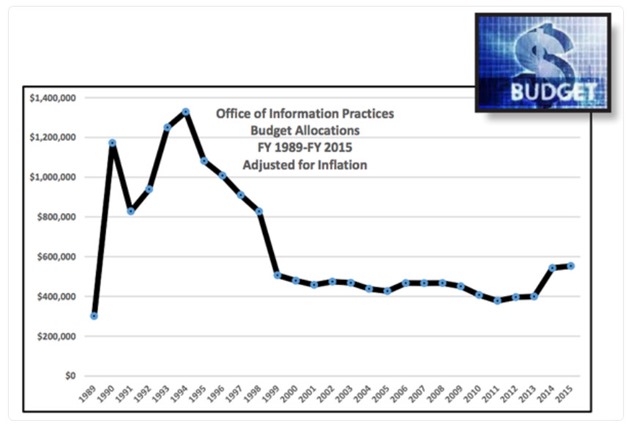 They also teach the requirements of the law. OHA (and other state agencies) can come up to speed easily—which means that the Kerry letter caper and related violations should not have taken place to begin with.

This is not to single out OHA, of course. The Kauai County Council, in the case cited above, should also have known that they were violating the law. In that instance, I believe they may have known. I base my theory on a video that was given to me many years ago and that unfortunately is gone along with the demise of my late beloved HP TC1100 tablet computer, in which a Kauai County Council member appeared to be debating, on video, whether the Council should follow the Sunshine Law or not.

Perhaps it is naïve of me to expect that this will change.