Eight months after the AP revealed slave-like conditions aboard boats in the Hawaii fishing fleet, no fix is in sight


“
In September, an extensive Associated Press investigation detailing poor labor conditions aboard Hawaii longline vessels that catch ahi and swordfish sparked national attention and public outrage….But eight months later, little appears to have changed when it comes to protecting the foreign fishermen who can’t stray from their American boats docked at Honolulu Harbor without risking deportation.Star-Advertiser, 5/14/2017
”

Time marches on (see: Three months after the AP revealed slave-like conditions aboard boats in the Hawaii fishing fleet, no fix is in sight, 12/7/2016).

In truth, nothing has changed to protect the foreign fishermen whose plight was described in the September 2016 Associate Press stories.

(See these AP stories for background)

The foreign longline fishermen exist in a sort of legal purgatory. While they are legally employed by U.S. vessels, they aren’t actually allowed to step foot on U.S. soil and aren’t afforded the labor protections of American workers.

While locals and tourists at restaurants like Nico’s off Pier 38 dine on the fresh ahi caught by foreign longliners, the fishermen remain confined to their boats just yards away. 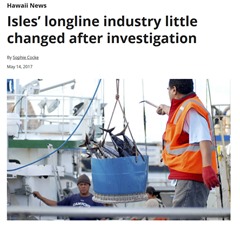 Today’s story revealed that Whole Foods, which had discontinued buying fish from the Hawaii Fish Auction when the abuses were revealed in September, resumed buying the fish in late December.

So much for retailer pressure on the industry to end the abuses.

The concerns expressed initially by our Congressional delegation have gone nowhere.

The Department of Land and Natural Resources heard a petition to change their rules, but denied it.

Bills introduced in the state legislature to prevent licensing of foreign fishermen did not succeed. In fact, there is already state law prohibiting the issuance of fishing licenses to fisherman who cannot legally land in Hawaii, but DLNR refuses to enforce it.

Most recently, a new petition has been sent to the Bureau of Land and Natural Resources in April. Although they are required to hear it, so far they have not scheduled it on a hearing agenda.

The “self-regulation” of the industry described in news articles is effectively non-existent because the document that the fleet operators created and describe as a “contract” is not, in fact, the fishermen’s labor contract, and it is unenforceable—the fishermen have no means to enforce it.

So it’s now eight months after the original AP stories spread around the country and around the world, and nothing has changed in Hawaii to end the abuses.