I’m not sure where this came from, but it’s a great summary of Hawaii’s Department of Land and Natural Resources use of alt-facts to justify their illegal issuance of fishing licenses to foreign fisherman working in near slave-labor conditions to bring in highly profitable catch for the fish auction.

The reference is to a hearing yesterday on a bill aiming to reform the licensing process. 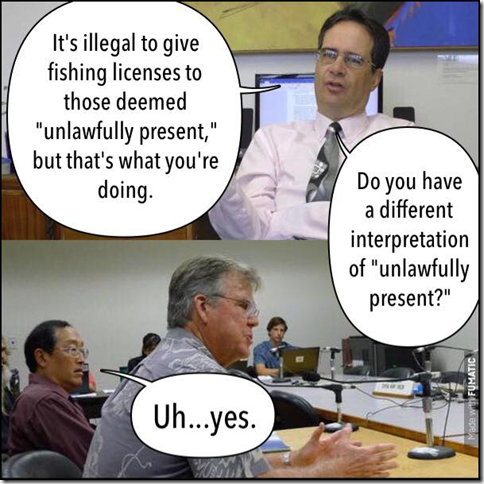 Pictured in the image is (top right) Sen. Karl Rhodes, chair of the Senate Committee on Water and Land, which held a hearing yesterday on SB152, the bill that seeks to reform Hawaii’s licensing of foreign fisherman who presently cannot land because of their immigration status (see: Latest AP story on conditions in Hawaii’s fishing fleet keeps the pressure on state government to correct abuses, 2/22/2017).

In the foreground is Bruce Anderson, DLNR/Division of Aquatic Resources, and next to him is frequent DAR spokesperson Alton Miyasaka, DAR/Acting Program Manager, Commercial Fisheries.

Anderson has refused in the past to change the DLNR’s licensing procedures holding that he is not responsible for what he described as “labor issues.”

If the cartoonist has more like this, please feel free to send any this way. Great stuff.