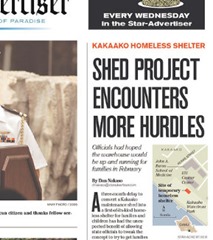 It’s hard avoid the conclusion that the leaders of our state—including legislative committee chairs, legislative leadership, the Governor and his task force on homelessness—really have no intention of doing anything that has a chance of working to alleviate the crisis.

Yesterday I wrote a kind of open letter query which I did send to each task force member, with little to no expectations of a reply, of course.

Today’s Star-Advertiser story bearing the cryptic headline Shed project encounters more hurdles is just the latest chapter in the ongoing  work of fiction that is the state’s program to end homelessness.

The “shed” is a proposed homeless shelter in Kakaako. Even if completed, it won’t make much of a dent in the population of street dwellers. But will it ever be completed? it was proposed to be open in February and to be closed two years later (another reason why it really won’t help much). Don’t get me wrong—more shelter is a good thing, but is no substitute for a correctly implemented Housing First program applied on a scale to match the magnitude of the need.

Gov. David Ige’s office proposed spending $900,000 in annual operating costs for the shelter, which is supposed to operate for only two years.

But a House bill provides no money, and a Senate version includes only half of the requested annual amount, or $450,000.

Scott Morishige, the state’s homeless coordinator, said he understands the public’s frustration that the shed remains empty and unrenovated after it was intended to open in February.

Maybe the public is frustrated because so many cannot afford soaring rents.

Now, is this simply a case of armchair quarterbacking? I don’t think so. The observation that little is moving that might help to end homelessness here is becoming self-evident as time passes and as plans and pronouncements fail to be fulfilled. The “shed,” as just the latest example, will not get started without funding, which (so far) is not forthcoming. Neither the state nor city requests are so far being funded.

About the only thing running “smoothly” is the program of daily raids on street dwellers conducted not only during the daytime but starting often from 1 a.m. or 3 a.m. Those raids do nothing to assist those affected to settle into permanent housing. At least the Mayor can no long destroy personal possessions, but it took a federal court order to stop him. I’ve gone out at night to watch the action on the streets. There’s nothing helpful about the city crews moving people along. If I hung around after a raid I would observe that people simply moved elsewhere, often around the corner, or just came back.

So will there be a renovated “shed?” Let’s see.

Will next year’s count of street dwellers increase yet again? Let’s see.

Will anyone press our state leaders to get busy on the multiple parts of the issue? Let’s see.

Can a czar without an army be effective? Let’s see.

Today's paper said that the "shed" was being designed to hold only 60 people (something like 27 families)for only two years. This is the only plan that would house children! And many children without families are currently living on the street, where they are sometimes moved several times a night! Are our politicians proud of the Honolulu they have helped create and now maintain?


This has been going on since President Lyndon Johnson's War on Poverty. Homeless families on the beach -- with children! Fifty years of ignoring the State mandate to provide for the private manufacture of low-cost homes for home ownership -- because we all know by now state attempts to provide the same don't work -- not even affordable housing set-asides that are not affordable.

No heart & no mind in the Democratic Party for the needy who -- luckily for the party -- don't vote. Care only for one's own family & friends does not a true society make. Look at the Middle East....in turmoil and human suffering spilling over into Europe.
When, after Pearl Harbor, many individuals of disparate races stood up to speak against the Internment Japanese Americans--they did so because they believed in their hearts and minds that we, in Hawaii,.would be nothing if we did not stand together. We were a true community (See Tom Coffman, The Island Edge of America).

No longer. The progeny of those saved? Apparently the Democrats have forgotten and now turn their backs on the poor and powerless, except for a few in power. A few won't do it.

And far worse -- we all know they have turned their backs while continuing their "sweeps" -- destruction of personal property & personal dignity by another name.
As for most of the churches, there is little to say except "Lukewarm, guys! Lukewarm." He has said He will "spew" these out of His mouth -- In other words, those who care not for others will be as "waste" in His eyes. The words in red in the bible.

And what of this?:

"The transcendant call from our island state to the surrounding world is that when we demean others we betray ourselves. There is a finer, better way. Pledge to it, make it real every day."

Demeaning is the act of forcibly taking people's tents and means to cook and pampers and tooth brushes and school books and homework....this can only happen with a shutting off of the eyes and heart...

The Democrats are good at parsing meaning by abusing the true meaning of words, to redirect the public's attention and control their conclusions, but that will only work for so long. Both political parties are becoming irrelevant through their own actions in evading the truth.