“
It’s frustrating that eight months after Gov. David Ige formed his high-profile task force to solve chronic homelessness in Hawaii, the only sound we hear is spinning wheels.
…
The governor’s promised legislative initiative to make a big dent in homelessness has sputtered so far.—Volcanic Ash, 4/10/2016
”


David Shapipro devoted his Vocanic Ash column in today’s Star-Advertiser to detailing the failure that is Hawaii’s response to its growing homelessness crisis. No one else in the commercial media has had the guts to call this non-effort for the failure it is so far.

If you’ve been reading Disappeared News over the past year you’ve seen that I’ve said pretty much the same thing—of course, Shapiro is a much better writer.

So there’s two of us.

But most of all, where are the members of Governor Ige’s emergency task force?

Shapiro notes that (in my words, not his) the Legislature and City Council have both obstructed progress by denying or drastically reducing funding requests for programs that would move people from the streets into permanent housing.

Evidence has shown that it is cheaper to put people into permanent housing than to pay for ER visits and perpetual social services that maintain them on the streets. So stalling is costing us all money by preventing housing programs from advancing. And so the unhoused homeless count advances each year—per capita it remains the highest in the nation.

Modest requests of $2 million for homeless outreach, $3 million for Housing First and $2 million for rental subsidies were axed altogether by the House; a Senate measure setting a goal of 22,500 new affordable rental units in 10 years has no funding behind it.

Shapiro holds the City Council and the feds accountable for underfunding programs as well. I can’t quote his whole column here—go buy or borrow a paper please, and turn to p. A2.

It’s not just eight months that have been lost since Ige formed his team. The legislative session is drawing to a close. So more than a  year will have been lost. If we need to create 20,000, 21,000, 22,500, 24,000 or 67,000 affordable rentals in the next decade (according to which estimate you read), we’ll need even more relief as time goes on because we’ve also done nothing to alleviate poverty in the state—more people are dropping out of homes into homelessness and the crisis only deepens.

This isn’t just another committee,” Ige said. “This team is making a commitment to work together to find solutions now. There is something important going on. We are the people responsible for the public’s welfare. This team is meeting face to face to address homelessness, and we are going to hold each other accountable.”—Civil Beat, Ige Creates a New Leadership Team to Tackle Homelessness, 7/27/2015

What would Gov. Ige’s team members say about the progress they have made towards reducing homelessness, so far?

I have little to no expectation of a reply, but I’ll send this article to Gov. Ige’s team members and see if there is any comment.

Calling the effort so far a failure is a strong criticism. What can be said to refute that?

Funding is finalized towards the end of the legislative session—which is about where we are now. So it’s fair to ask each team member what they are doing to assure that needed programs can proceed.

When the gov’s team was formed, the two legislator members made a commitment:

“The legislature understands the gravity of the situation and the need to pull all executive and governmental agencies to the table in an effort to execute and implement solutions that can be replicated in communities across the state,” said Sen. Tokuda, chair, Senate Ways and Means Committee.

“We really need to come together on enforcement, but also in providing alternative sites and coordinated services. This is a monumental step to pull together resources of the federal, state and county governments,” said Rep. Luke, chair, House Finance Committee.

These two legislators effectively control the purse strings. So as the session winds down, it’s fair to ask what they have done or will do to fulfill their earlier committments.

Team member Mayor Kirk Caldwell’s funding requests have been stymied by the City Council, but he has something to answer for himself—his frequent 1 a.m. and 3 a.m. raids on sidewalk dwellers.

Just how do these costly raids contribute to ending homelessness? I have described them as cruel because of the timing: trucks move out in the dead of night. While most sidewalk dwellers raided may be single individuals, there are also children and families caught outdoors and faced with disruption that can’t help the kids do well in the classroom. Yes, these are supposedly “sweeps” and not “raids.” but given the City’s history of institutional violence against the houseless I think the term is fair. 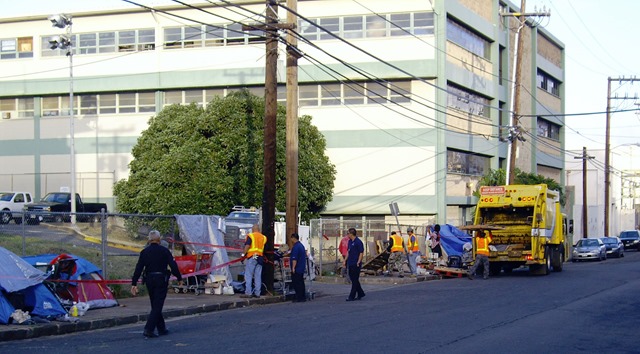 Remember, it took a federal court order to stop Caldwell’s people from unconstitutionally seizing and destroying personal property such as ID, money and medical supplies. Apparently he has yet to discipline the staff responsible for the long-term civil rights infractions.

Who on Governor Ige’s team has stepped up to the plate to state that these raids are counterproductive in terms of solving the homelessness crisis?

Yes, the streets need to be clear of obstruction and debris, but this is clearly not happening as witnessed by the daily scheduling of night and daytime raids. Tents and makeshift structures move from one spot to another.

Moving people into permanent housing, as many other states and municipalities have successfully done, is a much better and more cost-effective way to keep the streets passable.